Will you see colors in an aurora?

If you live below 50 degrees N. latitude, auroras are likely to be low on your horizon, and you’re less likely to see vivid colors.

By Mike Taylor of Taylor Photography in Unity, Maine

While observing the aurora, or northern lights, is a truly awe-inspiring and often breathtaking experience, the images that come out of modern day DSLR cameras may not match what you witness in real life, especially if you live below about 50 degrees N. latitude, as I do in Unity, Maine.

I’ve photographed many colors in the fantastic northern lights displays I’ve been lucky enough to observe – including green, purple, yellow, orange, red, magenta and blue. But I never really know what color they are unless I’m looking at my camera’s LCD screen or more importantly viewing these images on my computer.

To my eye, at my latitude, the aurora is typically low on the horizon, and it tends to come in shades of grey, with only a small amount of color, as in the photo below. 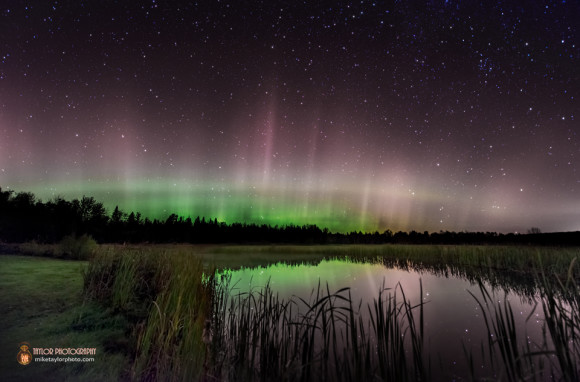 Mike Taylor desaturated some of the colors in this photo – that is, he subtracted the colors via processing – to show what his eye saw at his location.

I’ve heard from folks who have visited or live in areas such as Alaska, Norway or higher northerly latitudes (where the aurora is usually overhead, not on the horizon) that the colors of an auroral display are easily seen with the unaided eye.

I made the attached graphic (below) to show what I mean. These three photographs exemplify the most impressive aurora displays I’ve seen. The top row of images have had the skies desaturated by color (green, yellow, red, magenta, purple, blue) to show what I saw with my eyes.

A bit of green has been retained on the horizons and just a bit of the color that I remember seeing above that – red, violet, and red respectively. 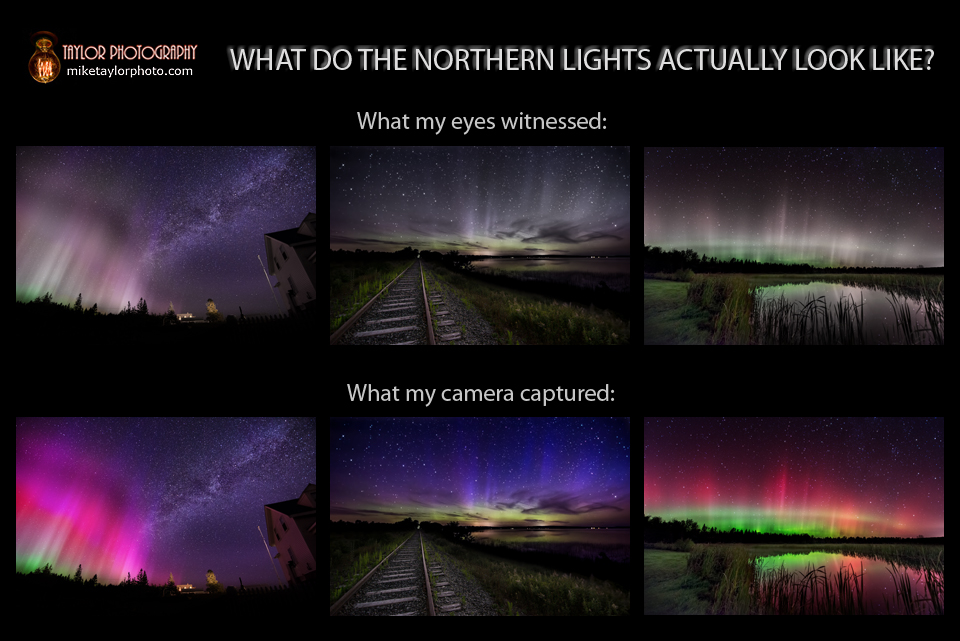 FYI – I generally set the white balance on my camera to Kelvin 3450 – 3570 when shooting the features of the night sky but I will also take a few frames with it set on Auto to see what colors the camera thinks it should be capturing. Most times I end up going with the Kelvin setting, which is a little bit on the cool/blue side of the spectrum. The EXIF data for these shots are K-3450, K-3570, K-3570 respectively. I process all my photos through Lightroom 4 & Photoshop CS5 and I certainly have an “artist’s view” when bringing an image to life but when it comes to these strong aurora scenes, the colors have not been saturated very much because Mother Nature did that work beautifully. 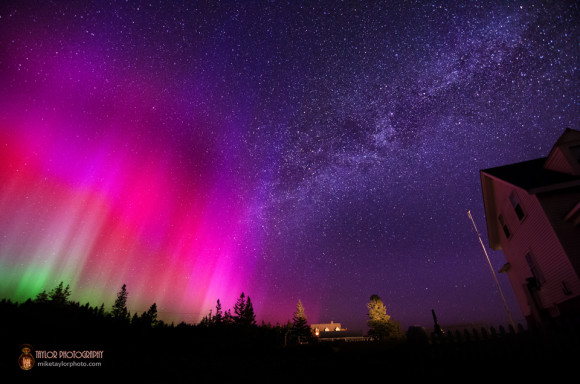 What the camera sees. Pemaquid Point Lighthouse by Mike Taylor.

I saw “dancing lights” in the sky, spiking straight up starting around a few hundred feet off the ground. They waved a bit like curtains but stayed in basically the same area. They seemed to be kind of a blur though, the “spikes” were not very defined. There was definitely a green hue on the horizon and a bit of red color above that but I didn’t see the crazy red & magenta colors that my camera recorded. I saw what appeared to be white/grey “curtains” dancing along the black sky. 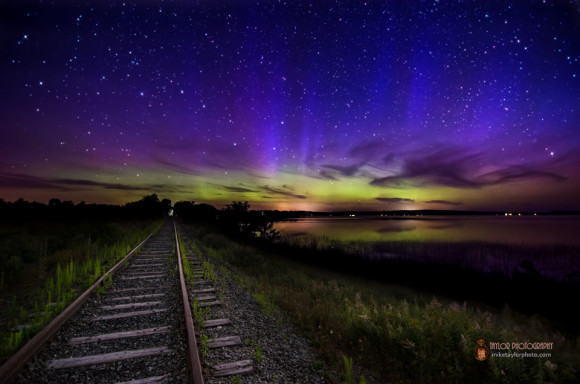 What the camera sees. Unity Train Tracks by Mike Taylor.

I didn’t see much of anything but I set up, starting shooting and immediately saw green on the horizon on my camera screen. I set the camera to shoot 30 second exposures for an hour with just a few seconds in between so that I could quickly review the scenes on the LCD screen as my camera snapped away. Within 10 minutes or so, I saw sharp spikes or columns shooting up and slowly moving across the sky. To my eye they appeared to be a light violet/purple color enough that I actually posted a status update to Facebook at 2:24 AM that said, “You know the aurora is cranked up when you can see the purple spikes with your naked eye.” When the display died down, I quickly looked through my images but I didn’t really know the spikes were blue until I viewed them on my computer. 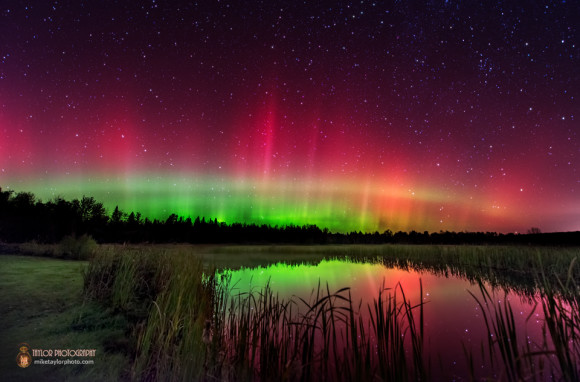 What the camera sees. Small Pond Outside of Unity by Mike Taylor.

Right Side Image – Small Pond Outside of Unity (incredible oval and screaming spikes):

The most impressive oval I’ve ever seen, a perfect arc which covered the Northern sky’s horizon. The tallest and most crisp “spikes” I’ve witnessed, reaching all the way to the stars. Again I saw definite green around the oval at the horizon but the spikes themselves were white/grey, not the intense red that my camera captured.

The intensity of the aurora always ebbs and flows, sometimes it is quite strong and other times it is mild. If you can see a simple glow or swirling lights on the horizon and/or “spikes” shooting into the sky that look like spotlights and/or “curtains” of light – pay attention and/or be patient. The display can last just a few minutes, a half hour, or longer. Most of the intense shows I have witnessed in central and northern Maine have lasted around half an hour.

Humans use two different kinds of cells in their eyes to sense light. Cone cells, concentrated in the fovea in the central area of vision, are high resolution and detect color in bright light. These are the main cells we use for vision in the daytime. Rod cells, concentrated in the periphery around the outside of the fovea, can detect much fainter light at night, but only see in black and white and shades of gray. [The aurora or northern lights] only appear to us in shades of gray because the light is too faint to be sensed by our color-detecting cone cells.

Thus the human eye views the northern lights generally in faint colors and as shades of grey/white. DSLR camera sensors don’t have the same limitation as our eyes. Couple that fact with long exposure times and high ISO settings of modern cameras, and it’s quite evident that the camera sensor has a much higher dynamic range of vision in the dark than we do.

The same thing is true regarding the Milky Way and night photography in general, by the way.

Feel free to share this post if you dig it and if you’ve read all the way down to here, I offer you a sincere thanks. I hope you found this information useful! 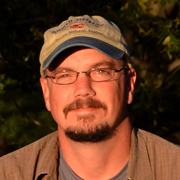 Taylor Photography is an imaging studio based in a 19th century farmhouse in central Maine. I have been a scenic & nature photographer for over 10 years and a studio photographer for 7 years. My recent work in landscape astrophotography has been featured on Space.com, the International Dark Sky Association, Earthsky.org, Spaceweather.com, Accuweather Astronomy, and multiple other science pages. I offer night photography & post-processing workshops and I am available for studio/product, architectural, and website development photography services. Visit me on: