Wildfires continue to plague US West

A satellite view from Monday shows wildfires still burning in Oregon, Idaho, and Montana. The fires started in August. 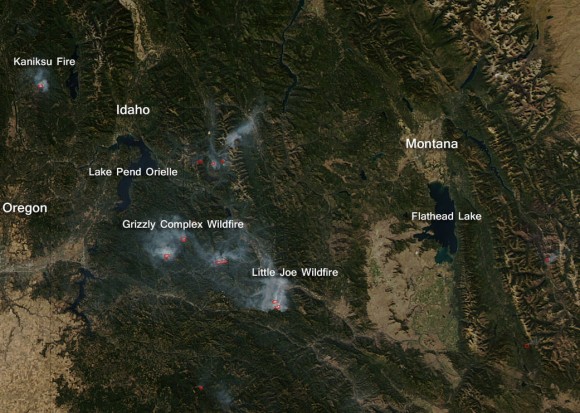 In this image, captured yesterday (September 28, 2015) by NASA’s Aqua satellite, you can see fires burning in Oregon, Idaho, and Montana. The fires, which all started last month, include the Kaniksu, the Grizzly Complex and the Little Joe fires.

The Kaniksu complex of fires consists of the following fires: Tower, Baldy, Onata, Grease Creek, Hall Mountain, Slate Creek, and South Fork Slate Creek Trail. This complex began on August 11 with a lightning strike. The fire complex grew to 26,120 acres, but it’s now 85% contained. Most of the remaining fires are expected to continue burning until steady rain or snow finally extinguishes them.

The Grizzly Complex of 16 fires in Idaho started on August 10 with lightning strikes. These fires have since been contained or grown together and now consist of three large and two medium fires. Despite cooler temperatures and occasional rain, many fires are still actively burning across north Idaho. The Grizzly Complex has burned approximately 19,000 acres this year. Although the fire has not destroyed any structures, it did burn into the Settler’s Grove of Ancient Cedars causing significant damage to many of the trees.

The Little Joe fire, which began as a lightning strike on August 27, is located seven miles southwest of St. Regis, Montana and is 207 acres in size. Containment of the fire has improved over the last five days and there are no current evacuations. The weather is expected to help out: Rain is forecasted for the rest of the week with highs in the 50s and lows hovering around 40 degrees.

For updates on all fires, visit the InciWeb, an interagency all-risk incident information management system that coordinates with federal, state and local agencies to manage wildfires.

Bottom line: A September 28, 2015 NASA satellite image shows fires burning in Oregon, Idaho, and Montana. The fires started in August, 2015, and include the Kaniksu, the Grizzly Complex and the Little Joe fires.