“They sounded raggedy, a little like humans who smoke a lot,” said a researcher who studies orangutans in the Indonesian forests. 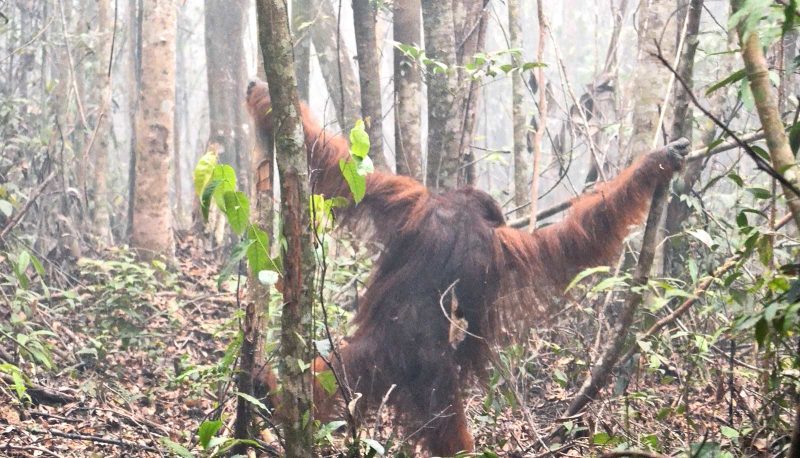 Orangutans – already critically endangered due to habitat loss from logging and large-scale farming – might also face another threat from wildfire smoke. A new study, published May 15, 2018, in the peer-reviewed journal Scientific Reports, found that orangutans eat and rest more after fires, but don’t gain weight.

In 2015, researcher Wendy Erb, of the Rutgers University Department of Anthropology, was studying male orangutans in the forests of Indonesian Borneo. A few weeks into the fire season – which happens annually, often due to smallholder farmers and plantations clearing forests to plant crops – Erb noticed a difference in the sound of the males’ “long call,” which scientists believe is used to attract females and warn other males. Erb said in a statement:

I thought they sounded raggedy, a little like humans who smoke a lot.

Erb decided to find out if the smoke the orangutans inhaled during the fires had affected their health. Erb studied four flanged male orangutans – males with large cheek pads. The team analyzed the animals’ urine, as well as their behavior, and discovered the big males traveled less, rested more and consumed more calories. They also produced more ketone bodies – molecules made by the liver from fatty acids during periods of low food intake – which was unexpected because the apes were eating more, not less. Why were these orangutans burning fat?

It’s possible these males are burning fat because their energy is going to repairing tissue.

According to the study, the only new element in the orangutans’ lives was the three months of fire and smoke. The forests’ natural surface consists of peat, which is flammable, allowing the fires to burn underground for weeks. The fires were worse in 2015 because of a strong El Niño effect, which brought with it a severe drought.

Soil analyses suggest that wildfires have occurred in Borneo for millennia, but have become increasingly frequent and intense in recent decades due to deforestation and draining of peatlands. In 2015, Indonesia experienced the most severe fire activity and smoke pollution on record since the disastrous wildfires during the 1997 El Niño droughts.

The unexpected loss of nearly 100,000 Bornean orangutans from intact forests in Kalimantan between 1999 and 2015 indicates that habitat loss alone is not driving this critically endangered species’ declines. Increasingly frequent exposure to toxic smoke could have severe consequences for orangutans, other animals and people, and this research highlights the urgent need to understand the long-term and indirect impacts of Indonesia’s peatland fires, beyond the immediate loss of forests and their inhabitants.