Why was El Reno, Oklahoma tornado downgraded to EF-3?

This past weekend, the National Oceanic and Atmospheric Association (NOAA) announced that the May 31, 2013 El Reno, Oklahoma tornado –known as the widest tornado ever recorded in U.S. history at 2.6 miles – has been downgraded from an EF-5 to an EF-3 tornado. The storm had sustained winds around 136 to 165 miles per hour, and was the infamous tornado that killed Tim Samaras from Discovery Channel’s Storm Chasers, along with his son and chaser Carl Young.

The question that meteorologists are asking is: Why did they officially drop the EF-5 rating when a mobile Doppler radar picked up winds of 295 mph within 500 feet of the ground?

The Enhanced Fujita (EF) scale rates the intensity of tornadoes based upon the amount of damage created by a tornado. Before a rating is issued, a survey team of meteorologists inspects the buildings that were damaged or destroyed. They also analyze how the buildings were engineered and constructed. Obviously, it takes stronger winds to destroy a brick house than a mobile home. According to the Storm Prediction Center, the EF scale are based on judgmental estimates from meteorologists at the National Weather Service (NWS). 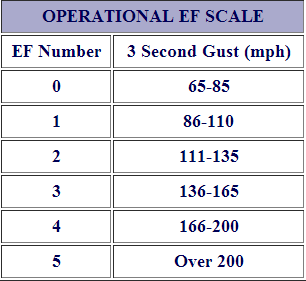 According to NOAA’s Storm Prediction Center:

Enhanced F-scale winds are derived from engineering guidelines but still are only judgmental estimates, because … Nobody knows the “true” wind speeds at ground level in most tornadoes

The amount of wind needed to do similar-looking damage can vary greatly, even from block to block or building to building …damage rating is (at best) an exercise in educated guessing. Even experienced damage-survey meteorologists and wind engineers can and often do disagree among themselves on a tornado’s strength.

So, why did they downgrade the El Reno tornado from an EF-5 to an EF-3 tornado? The tornado went over a rural area, and it did not leave behind catastrophic damage typically associated with an EF-5 tornado. Based on the guidelines of the Enhanced Fujita scale, the survey team could only find damage typically seen with an EF-3 tornado. However, measurements from a Dopplar radar indicated winds typically associated with an EF-5 tornado. There have been reports of EF-5 tornadoes hitting rural areas and literally removing pavement or digging a trench into the ground, but this was not the case with the El Reno storm. There are still plenty of mysteries regarding tornadoes. We never truly know how fast the winds turn at the surface, at 50 feet, or even 200 feet in the air. However, when we measure using the EF scale, we do not take into account radar-estimated winds into the equation.

Dr. Greg Forbes, the severe weather expert at The Weather Channel has mixed opinions about the latest rating.

My own feeling on the El Reno tornado rating is that it should be left at the EF-5 intensity, using the Doppler radar data. While not every tornado can be measured that way, I don’t think that we should overlook available data. One concern, though, is about how rapidly tornado winds decrease near the ground due to friction – and that seems to vary from one tornado to another. So having measured tornado winds several hundred feet above ground does not guarantee that we know what the speeds are at roof-top level. 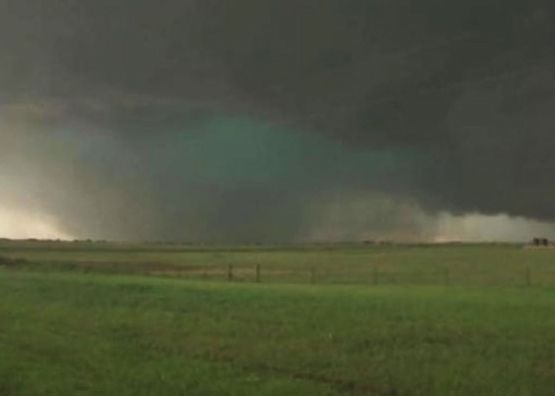 While the meteorological community can debate whether the El Reno tornado was an EF-3 or EF-5 tornado, I sit here and wonder why there should be a debate. When you look at the social aspect behind the rating, could you tell me what the difference is between a 165 mph tornado versus a 180 mph tornado? All that needs to be assumed is that the tornado is violent and can destroy buildings, landscapes, and possibly kill people. However, in the field of science, we want answers that are exact. Scientists spend years researching topics to improve the field of science to find answers to explain the unknown variables. Could this debate lead to updating or changing the Enhanced Fujita scale? As of now, there are meteorologists out there who would like to further examine this scale.

Bottom line: NOAA announced this past weekend that the May 31, 2013 El Reno, Oklahoma tornado –known as the widest tornado ever recorded in U.S. history at 2.6 miles and responsible for killing highly respected storm chasers Tim Samaras, Paul Samaras and Carl Young – has been downgraded from an EF-5 to an EF-3 tornado.