Why don’t poison frogs poison themselves?

Scientists are a step closer to resolving this head-scratcher. And their findings have potential consequences for the fight against pain and addiction. 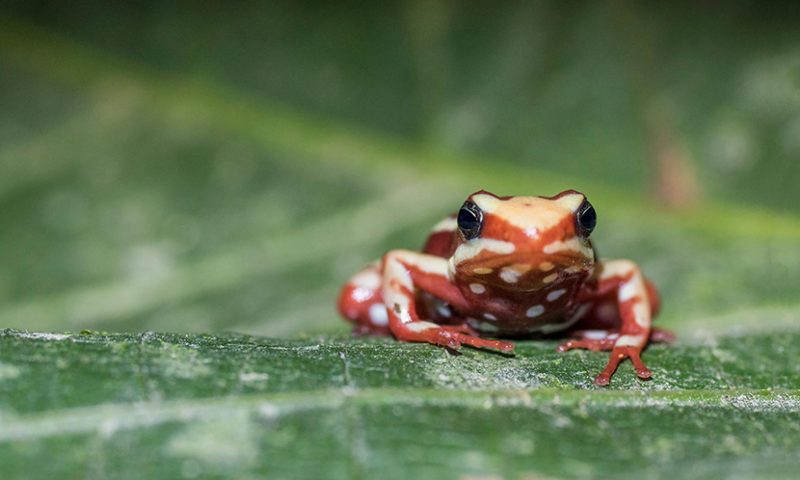 The phantasmal poison frog, Epipedobates anthonyi, is the original source of epibatidine, discovered by John Daly in 1974. Epibatidine has not been found in any animal outside of Ecuador, and its ultimate source, proposed to be an arthropod, remains unknown. This frog was captured at a banana plantation in the Azuay province in southern Ecuador in August 2017. Image via Rebecca Tarvin/University of Texas at Austin.

Don’t let their appearance fool you: Thimble-sized, dappled in cheerful colors and squishy, poison frogs in fact harbor some of the most potent neurotoxins we know. With a new paper published in the journal Science, scientists are a step closer to resolving a related head-scratcher — how do these frogs keep from poisoning themselves? And the answer has potential consequences for the fight against pain and addiction.

The new research, led by scientists at The University of Texas at Austin, answers this question for a subgroup of poison frogs that use the toxin epibatidine. To keep predators from eating them, the frogs use the toxin, which binds to receptors in an animal’s nervous system and can cause hypertension, seizures, and even death. The researchers discovered that a small genetic mutation in the frogs — a change in just three of the 2,500 amino acids that make up the receptor — prevents the toxin from acting on the frogs’ own receptors, making them resistant to its lethal effects. Not only that, but precisely the same change appeared independently three times in the evolution of these frogs.

Rebecca Tarvin is a postdoctoral researcher at UT Austin and a co-first author on the paper. She said:

Being toxic can be good for your survival — it gives you an edge over predators.So why aren’t more animals toxic? Our work is showing that a big constraint is whether organisms can evolve resistance to their own toxins. We found evolution has hit upon this same exact change in three different groups of frogs, and that, to me, is quite beautiful. 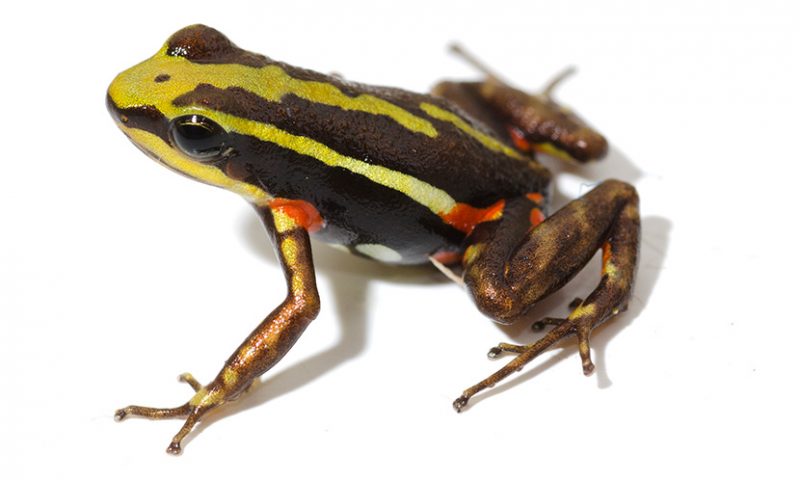 There are hundreds of species of poisonous frogs, each of which uses dozens of different neurotoxins. Tarvin is part of a team of researchers, including professors David Cannatella and Harold Zakon in the Department of Integrative Biology, who have been studying how these frogs evolved toxic resistance.

For decades, medical researchers have known that this toxin, epibatidine, also can act as a powerful nonaddictive painkiller. They’ve developed hundreds of compounds from the frogs’ toxin, including one that advanced in the drug-development process to human trials before being ruled out due to other side effects.

The new research — showing how certain poison frogs evolved to block the toxin while retaining use of receptors the brain needs — gives scientists information about epibatidine that could eventually prove helpful in designing drugs such as new pain relievers or drugs to fight nicotine addiction.

Cecilia Borghese is another co-first author of the paper and a research associate in the university’s Waggoner Center for Alcohol and Addiction Research. She said:

Every bit of information we can gather on how these receptors are interacting with the drugs gets us a step closer to designing better drugs. 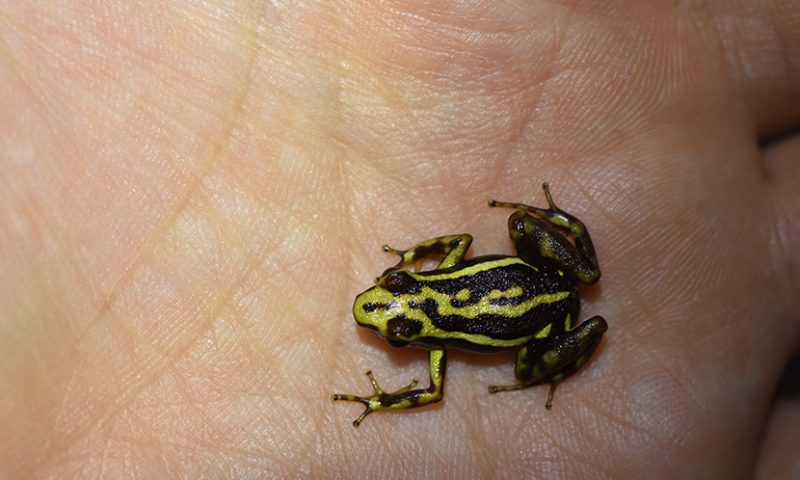 A receptor is a type of protein on the outside of cells that transmits signals between the outside and the inside. Receptors are like locks that stay shut until they encounter the correct key. When a molecule with just the right shape comes along, the receptor gets activated and sends a signal.

The receptor that Tarvin and her colleagues studied sends signals in processes like learning and memory, but usually only when a compound that is the healthy “key” comes into contact with it. Unfortunately for the frogs’ predators, toxic epibatidine also works, like a powerful skeleton key, on the receptor, hijacking cells and triggering a dangerous burst of activity.

The researchers found that poison frogs that use epibatidine have developed a small genetic mutation that prevents the toxin from binding to their receptors. In a sense, they’ve blocked the skeleton key. They also have managed, through evolution, to retain a way for the real key to continue to work, thanks to a second genetic mutation. In the frogs, the lock became more selective.

The researchers found that the changes that give the frogs resistance to the toxin without changing healthy functioning occur in parts of the receptor that are close to, but don’t even touch epibatidine. Borghese and Wiebke Sachs, a visiting student, studied the function of human and frog receptors in the lab of Adron Harris, another author on the paper and associate director of the Waggoner Center. Borghese said:

The most exciting thing is how these amino acids that are not even in direct contact with the drug can modify the function of the receptor in such a precise way. The healthy compound, she continued, “keeps working as usual, no problem at all, and now the receptor is resistant to epibatidine. That for me was fascinating.

Understanding how those very small changes affect the behavior of the receptor might be exploited by scientists trying to design drugs that act on it. Because the same receptor in humans is also involved in pain and nicotine addiction, this study might suggest ways to develop new medications to block pain or help smokers break the habit.

Working with partners in Ecuador, the researchers collected tissue samples from 28 species of frogs — including those that use epibatidine, those that use other toxins and those that are not toxic. Tarvin and her colleagues Juan C. Santos from St. John’s University and Lauren O’Connell from Stanford University sequenced the gene that encodes the particular receptor in each species. She then compared subtle differences to build an evolutionary tree representing how the gene evolved.

This represents the second time that Cannatella, Zakon, Tarvin and Santos have played a role in discovering mechanisms that prevent frogs from poisoning themselves. In January 2016, the team identified a set of genetic mutations that they suggested might protect another subgroup of poison frogs from a different neurotoxin, batrachotoxin. Research published this month was built on their finding and conducted by researchers from the State University of New York at Albany, confirming that one of UT Austin’s proposed mutations protects that set of poison frogs from the toxin.

Bottom line: New research on why poison frogs do not poison themselves.