Why do koala bears hug trees?

As temperatures climb, koalas move to cooler trees and go limp, like wet dishrags. Turns out their tree-hugging is a cooling mechanism. 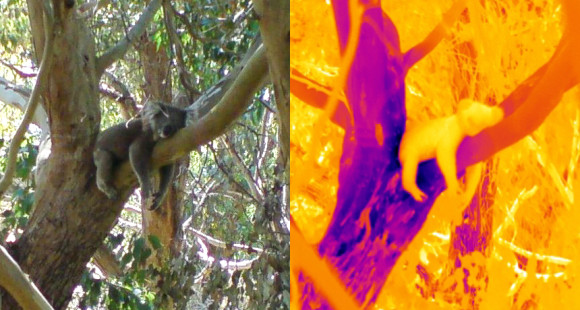 Koalas use trees like we humans use air conditioning: to cool off, a new study shows. Infrared photography and calculations of animal heat loss revealed that koalas cool as they shift to cooler trees and place more of their bodies in contact with the wood. Image via Steve Griffiths.

Many media are reporting on the June 4, 2014 study in the Royal Society’s Biology Letters explaining how koala bears came to be the original tree-huggers. It turns out that, as temperatures climb, koalas move to cooler trees and put more of their bodies in contact with the trees.

A team of Australian and American researchers explored the fact that as temperatures soar past 37° Celsius (98.6 degrees F.), koalas tended to move lower in trees. They stretch out, placing as much of their bodies as they can in contact with the trees. They’ll even abandon the eucalyptus trees that provide their food, in favor of inedible Acacia mearnsii trees. Acacia tree trunks average slightly more than 5 degrees Celsius below air temps, the scientists said.

Infrared photography and calculations of animal heat loss revealed that the shifts to the cooler trees cooled the koalas.

The scientists said this research provides a very different perspective on the habitat requirements for koalas. They need trees good at air conditioning as well as trees good for food.

Read more about the new study of how koalas cool themselves at Wired.