Why do global temperature records differ?

Why do these institutions sometimes disagree? For example, why do NASA and NOAA disagree on the status of March, 2015 in the global temperature record?

The four major keepers of records on global temperature – the fourth is the UK Met Office, which posts its data here – commonly publish slightly different conclusions from their separate analyses. Contrarian arguments, by those who don’t believe Earth is warming, often point out that one group’s ranking is slightly different than another’s.

And the differences are surely there, although they are small.

However, when you look at the graphics below – March 2015 temperatures data from NASA, NOAA and Japan – do you see differences, or similarities? 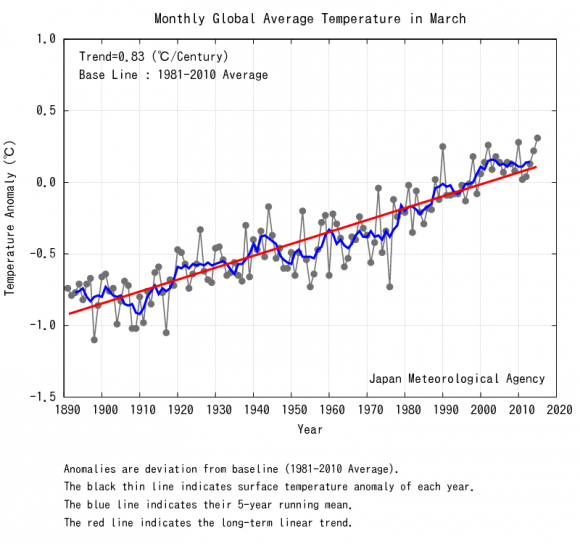 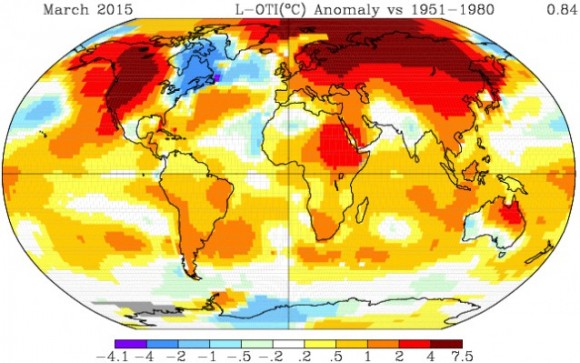 I see similarities. And, in fact, the slight differences show how science works, and why it works so well.

In science, different groups will nearly always use slightly different ways of collecting and analyzing data; science is a human process, after all, and we humans don’t think identically.

In science, if two groups of results come extremely close to confirming each each other – as the temperature data sets of NASA, NOAA and the Japanese Meteorological Agency surely do – scientists themselves understand the reason for the small differences in the data. They assume those small differences will always be there.

They would say the data sets of NASA, NOAA and the Japanese Meteorological Agency independently confirm each other, indicating we are on the right track.

The graph below gives you a better idea of this independent confirmation.

On January 21, 2015, Adam Voiland of NASA Earth Observatory, writing at NASA GISS’ website, explained the ways in which the four major Earth-temperature data-keepers gather and analyze their data. Among other things, he wrote:

Although all four science institutions have strong similarities in how they track and analyze temperatures, there are subtle differences. As shown in the chart [below], the NASA record tends to run slightly higher than the Japanese record, while the Met Office and NOAA records are usually in the middle.

There are good reasons for these differences, small as they are. Getting an accurate measurement of air temperature across the entire planet is not simple. Ideally, scientists would like to have thousands of standardized weather stations spaced evenly all around Earth’s surface. The trouble is that while there are plenty of weather stations on land, there are some pretty big gaps over the oceans, the polar regions, and even parts of Africa and South America.

The four research groups mentioned above deal with those gaps in slightly different ways. The Japanese group leaves areas without plenty of temperature stations out of their analysis, so its analysis covers about 85 percent of the globe. The Met Office makes similar choices, meaning its record covers about 86 percent of Earth’s surface. NOAA takes a different approach to the gaps, using nearby stations to interpolate temperatures in some areas that lack stations, giving the NOAA analysis 93 percent coverage of the globe. The group at NASA interpolates even more aggressively—areas with gaps are interpolated from the nearest station up to 1,200 kilometers away—and offers 99 percent coverage.

By the way, NOAA’s recent analysis contained the following features:

– Seven of the past eleven months (May, June, August, September, October, and December 2014, along with March 2015) have tied or set new record high monthly temperatures.

– Some experts are predicting that 2015 will be the hottest year on record. That is because a weak El Niño began in early 2015, and El Niños typically cause a short-term warming that drives overall global temperatures upward. NOAA said in its report:

… according to NOAA’s Climate Prediction Center (CPC) … a weak-phase El Niño is continuing. According to the CPC, there is about a 70 percent chance that El Niño will continue through Northern Hemisphere summer 2015, and more than 60 percent chance it will last through fall. El Niño conditions tend to enhance global temperatures, with stronger events having generally larger impacts.

View larger. | March 2015 anomalies and events according to NOAA.

Bottom line: The main reason for the slight differences in temperatures data sets from NASA, NOAA and the Japanese Meteorological Agency is that we do not have thousands of standardized weather stations spaced evenly all around Earth’s surface. In particular, there are some big gaps in weather stations over the oceans, the polar regions, and even parts of Africa and South America. Different institutions have different ways of dealing with these gaps in the collected data, and that is why their data sets disagree slightly. Overall, the agreement is very good, however, and shows that Earth has been warming and continues to warm.