Why did Tsavo lions eat people?

In 1898, a pair of lions ate 135 people at a railroad camp in Kenya. Scientists have analyzed microscopic wear on the lions’ teeth to find out why.

In 1898, a pair of lions – known as the man-eating lions of Tsavo (SAH-vo) –
killed and ate 135 people at a railroad camp on the Tsavo River, in what is now Kenya, before they were shot and killed.

Scientists have debated about what drove the Tsavo lions to eat people. A new analysis of the microscopic wear on the lions’ teeth, published in the journal Nature: Scientific Reports on April 19, 2017, suggests that prey shortages of their usual prey might have driven the lions to turn to humans. At the time, the Tsavo region was in the midst of a two-year drought and a rinderpest epidemic that had ravaged the local wildlife. 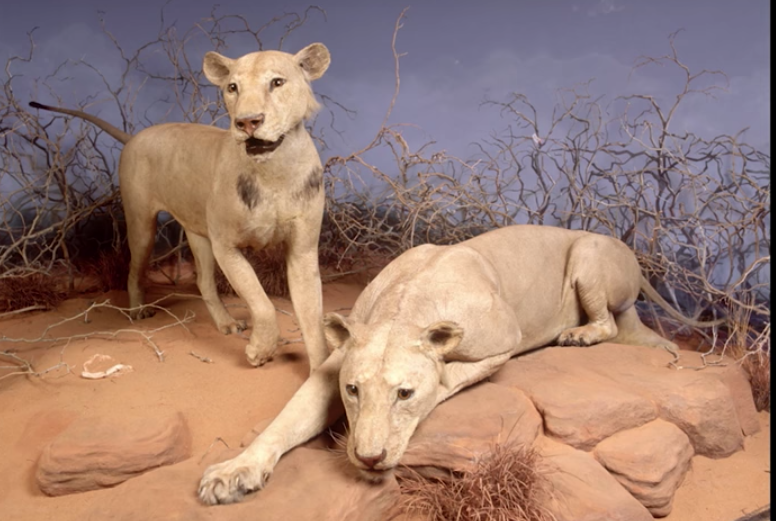 Model of the Tsovo lions at the Field Museum of Natural History in Chicago. Image via Field Museum.

Bruce Patterson, a mammals curator at the Field Museum of Natural History in Chicago, has studied the Tsavo lions extensively. Patterson said in a statement:

It’s hard to fathom the motivations of animals that lived over a hundred years ago, but scientific specimens allow us to do just that. Since the Field Museum preserves these lions’ remains, we can study them using techniques that would have been unimaginable a hundred years ago.

The primary Tsavo man-eater, left, had major dental damage including a major abscess and loss of teeth. The jawbone of the Mfuwe man-eater, right, shows multiple lesions and other injuries consistent with damage done by a powerful kick from an antelope or buffalo. Both injuries were serious enough to have interfered with the lions’ ability to hunt their natural prey successfully. Image via Bruce Patterson/Field Museum.

To learn about the lions’ diet in the days and weeks before their death, the researchers used state-of-the-art dental microwear analysis on the teeth of three man-eating lions from the Field Museum’s collection: the two Tsavo lions (from what is now Kenya) and a lion from Mfuwe, Zambia that consumed at least six people in 1991.

The Tsavo lion that did the most man-eating, (as established through chemical analysis of the lions’ bones and fur in a previous study), had severe dental disease, a painful infection that would have made normal hunting impossible. Patterson explained:

Lions normally use their jaws to grab prey like zebras and buffalos and suffocate them. This lion would have been challenged to subdue and kill large struggling prey. Humans are so much easier to catch.

The diseased lion’s partner, on the other hand, had less pronounced injuries to its teeth and jaw — injuries that are fairly common in lions which are not man-eaters. According to the same chemical analysis, it consumed a lot more zebras and buffalos, and far fewer people, than its hunting companion.

Bottom line: A new microscopic wear on the teeth of the Tsavo lions is helping scientists determine the pair of lions ate 135 people at a railroad camp in Kenya over a century ago.