Why did passenger pigeons die out?

In the 19th century, passenger pigeons were so numerous that hunters competed to shoot as many as possible. But the last passenger pigeon died in the Cincinnati Zoo over 100 years ago. How did it all go so wrong? 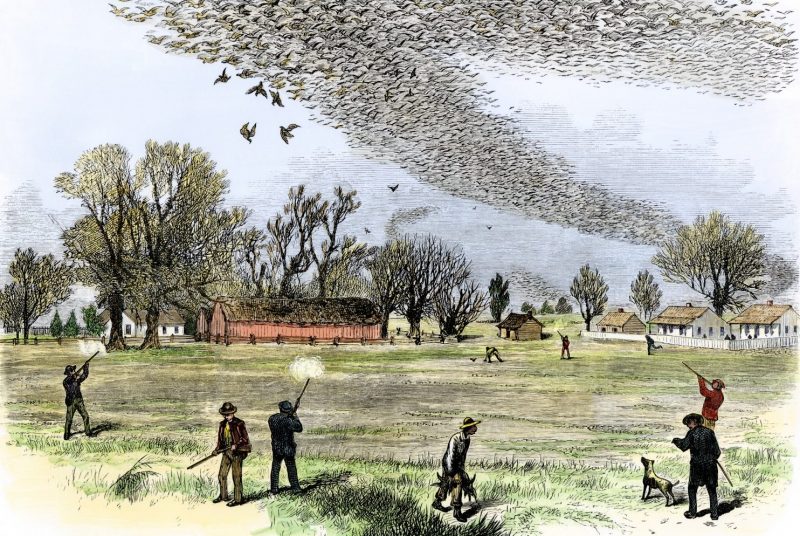 This illustration shows how passenger pigeons were shot in huge numbers by Europeans. Illustration by Smith Bennett.

This article is republished with permission from Gemini. This post was written by Steinar Brandslet.

Why do species die out? This is the overarching question being asked by many leading researchers. Knowing more about what leads to a species’ becoming extinct could enable us to do something about it. The passenger pigeon is a famous example and the species has been studied extensively.

The passenger pigeon (Ectopistes migratorius) was once found in huge numbers in North America. Records tell of passing flocks that darkened the skies for several days at a time. The species may have peaked at five billion individuals. A more conservative estimate is three billion.

Within a short time, the species disappeared completely.

Given the huge size of the population, it’s simply amazing that the species disappeared so quickly. 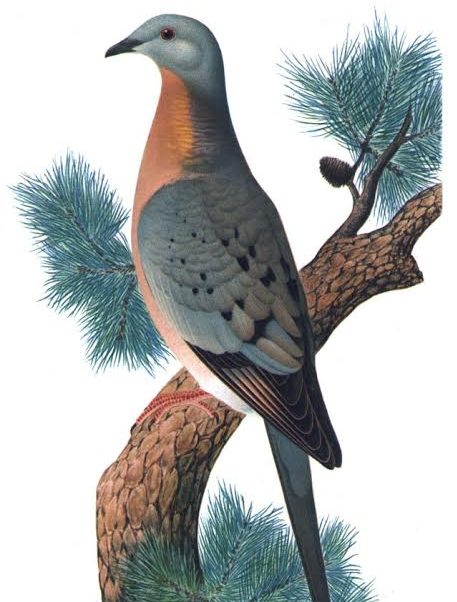 Passenger pigeon populations were once the most abundant bird in North America. Illustration by K. Hayashi.

The history of the passenger pigeon is interesting, partly because it can tell us something about how and why species become extinct.

Native Americans also relied on passenger pigeons for food. But at least in parts of the passenger pigeons’ range, people had learned to harvest the species at a sustainable level that didn’t threaten to eradicate it.

It was common in some parts of North America to only eat young pigeons that were hunted at night, since this did not seem to scare away the adult birds or prevent them from re-nesting.

But starting around 1500, a more aggressive variant of humans came to the continent with the arrival of Europeans. The hunt for passenger pigeons grew and culminated in a massive hunt for the species throughout the 1800s, before the species finally collapsed and disappeared.

So were the Europeans then really the ones to blame for the collapse? 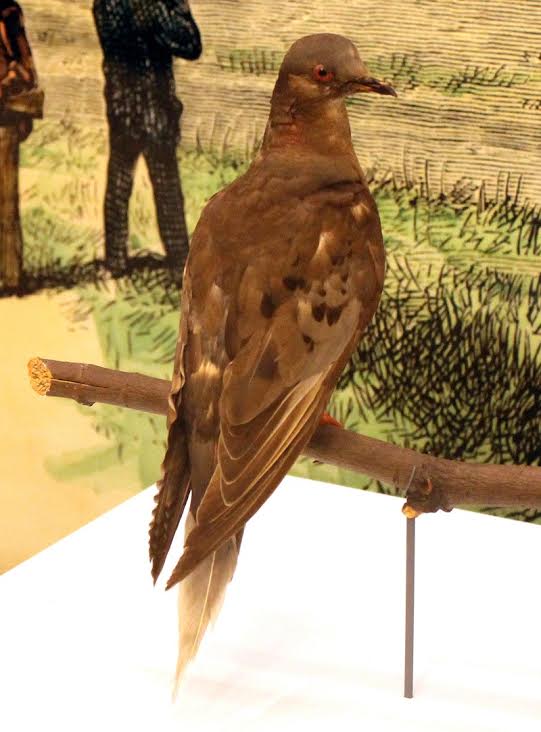 Martha, the last living passenger pigeon, died in a Cincinnati zoo in 1914. Photo via Wikimedia Commons.

In 2014, a study in published in the scientific journal PNAS strongly suggested that humans were simply the final straw in destroying a species that was already vulnerable and headed to oblivion.

The researchers asserted that despite their enormous numbers, the passenger pigeons were already in trouble. The species’ population numbers varied greatly, similar to lemmings, but over a longer period of time.

Studies of the genetic variation of the species using an investigative method called PSMC formed the background for these assertions. And now we have to concentrate a bit. 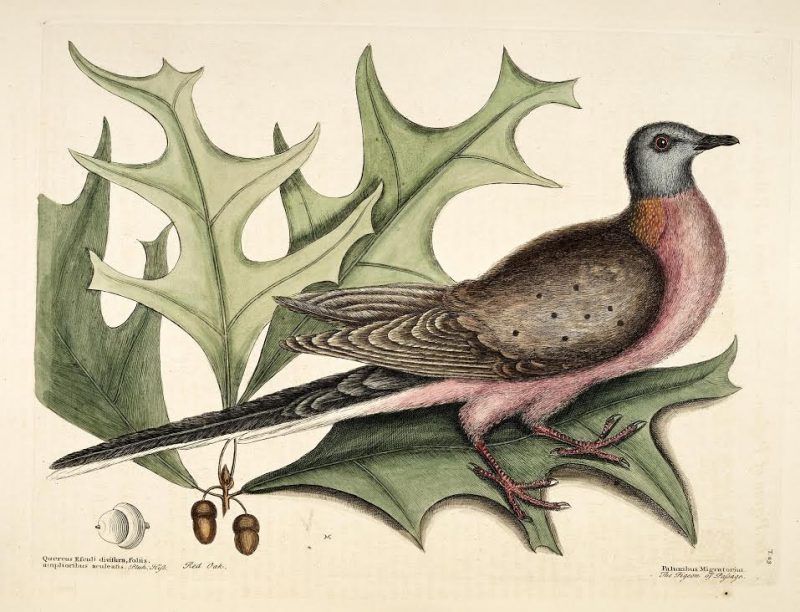 An early drawing of a passenger pigeon, dating from 1731. Illustration by Mark Catesby.

From one to many

All of an individual’s genes are called a genome. You have a genome, your mom has her own genome, your dog has one and the neighbour’s cat has yet another. These can be broken down into chromosomes and genes and base pairs, but you only have a single genome.

So, all of your chromosomes and genes are found in this one genome, but at the same time this genome is unique to just you and only you. Unless, that is, you have an identical twin or are a termite or belong to another species where the individuals are largely identical clones. (In the last case, it’s remarkable that you can read this.)

Here is the crux of the matter:

The PSMC method can use the information in the genes of a single individual of a species to map the history of the species.

You should therefore be able to see how the species developed over many generations, and estimate how many individuals there were at any given time, all based on a single genome. 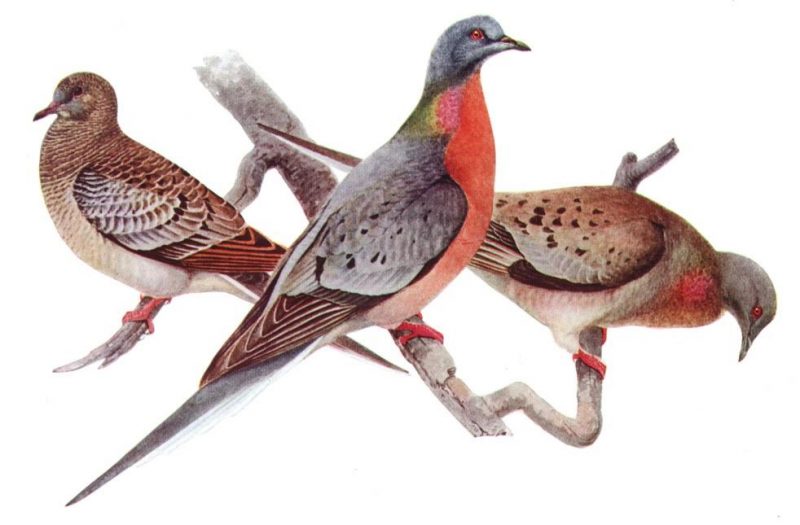 Humans partially off the hook

Using this method, researchers found that the number of passenger pigeons was in free fall even before the arrival of the Europeans.

Although the species might not have become extinct, it would have shrunk significantly in any case, maybe to only a few hundred thousand individuals.

People were just the final factor in their demise. We may have pushed the passenger pigeons off the cliff, but the species was already on its way there.

So – according to the researchers behind the study in PNAS – it wasn’t just the Europeans’ fault.

It sounds almost too good to be true that you can come up with something so definitive based on information from just one or a few individuals. And in this case it is – at least if we’re to believe a new study published November 17, 2017 in the journal Science. 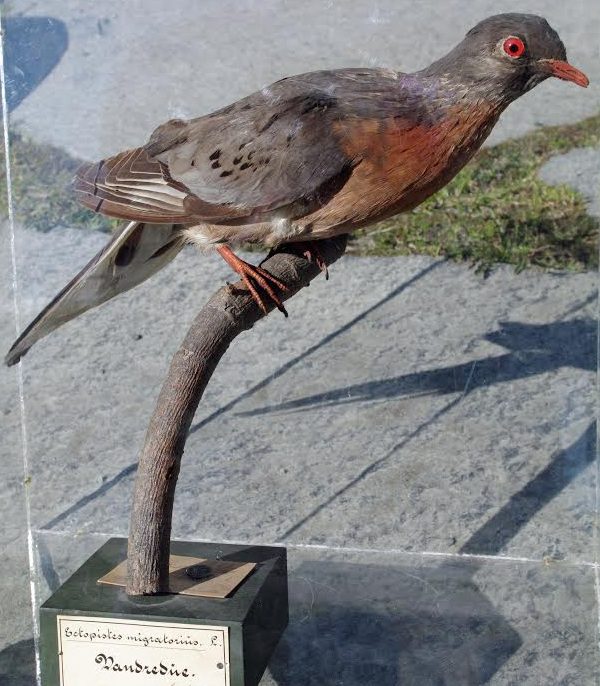 The problem is that the PSMC method can’t be used on passenger pigeons. The new research in Science provides completely different results.

Leading molecular biologist Beth Shapiro is the main author of the Science article, and Tom Gilbert is one of the study’s contributors. (Heads up – you can skip to the next section if you don’t want to know a little more about why PSMC doesn’t work for the passenger pigeon in particular.)

PSMC is based on the assumption that genetic variations occur relatively evenly all along the chromosomes that constitute the genome. That is, genetic changes are equally likely to occur at the ends of a chromosome as in the middle. But this turns out not to be the case for this species. Gilbert said:

Passenger pigeons don’t have the variation patterns that we’d expect, because of the strong selection on genes that appear to have been important throughout the species’ history. So it doesn’t work to use PSMC in this case.

In passenger pigeons, most of the genetic diversity was found at the ends of the chromosome. The middle of the chromosome showed little variation from one generation to the next as a result of the selection on these genes.

This fact may not sound revolutionary, but it yields completely different results if you try to read the history of the species based on the genome of a single individual.

You have to take into account that variations are greatest in certain parts of the chromosome rather than evenly distributed throughout. This makes the PSMC method unusable in this context. 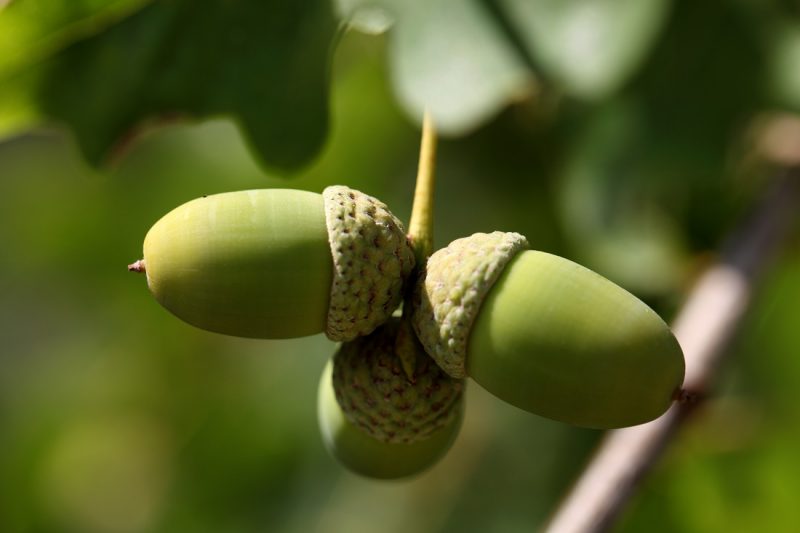 Passenger pigeons fed on acorns, among other foods. But huge oak forests were also eradicated, too. Photo via Colourbox.

The researchers behind the article in Science didn’t use the PSMC method. Instead, they used mitochondrial DNA from 41 passenger pigeons as their starting point. Now we have to concentrate again.

Your DNA is not your only inheritance. Mitochondrial DNA is a distinct, separate inheritance found in certain cells called mitochondria.

This is a different point of departure for understanding how a species develops over time, and the results can be quite different from those generated using the PSMC method.

The final result was that the new study ended up with completely different answers about the passenger pigeons and why the species met its demise. 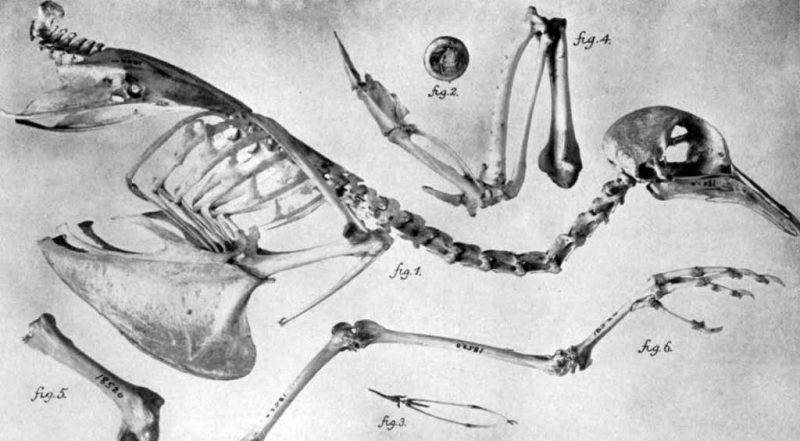 The new study is interesting for several reasons. It tells us about the genetic diversity of the passenger pigeon, but also supports an entirely different explanation for the species’ extinction.

Scientists previously believed that the larger the population of a species is, the more genetically diverse it will be. But this theory has turned out to be wrong, as the recent passenger pigeon research has shown.

According to the article in Science, the large population size appears to have enabled passenger pigeons to adapt and evolve more quickly and thus remove harmful mutations.

Mutations that provide a major evolutionary benefit would spread rapidly.

The fact that beneficial mutations became incredibly dominant so quickly simply led to the disappearance of other genetic variants.

This in turn led to the genetic diversity in the passenger pigeon being surprisingly low in relation to the number of individuals. This may have made the species more vulnerable to changes.

But that was not why the passenger pigeon died out.

The passenger pigeon died out because of people.

The passenger pigeon wasn’t in trouble prior to Europeans arrival in North America. Nothing suggests that the species was struggling in any way.

Perhaps this isn’t that surprising. In the 19th century, passenger pigeons were so numerous that there were contests to shoot as many of them as possible during a certain period of time. In one competition, the winner had shot 30,000 birds.

If nothing else, the story of the passenger pigeon has contributed to a greater understanding that even prolific species can become extinct. 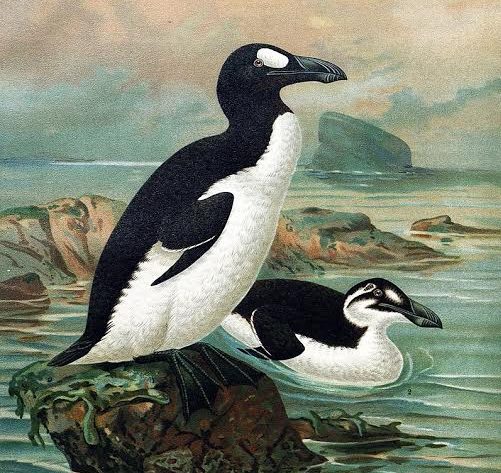 The large grasshopper Melanoplus spretus from the western United States suffered the same fate. It went from a population of several trillion to zero in a few decades, possibly because farmers destroyed its breeding grounds. In Norway and across the whole of the North Atlantic, the great auk (Pinguinus impennis) died out after people harvested them in large numbers.

People ate passenger pigeons in huge amounts, but they were also killed because they were perceived as a threat to agriculture. As Europeans migrated across North America, they thinned out and eliminated the large forests that the pigeons depended on. The pigeons lived primarily on acorns.

As the species was already dying out, 250,000 birds – the last big flock – were shot on a single day in 1896. That same year, the last passenger pigeon was observed in Louisiana. It was also shot.

The pigeons were probably dependent on a large flock size to reproduce. Their instincts didn’t work when only a few individuals remained here and there.

The last passenger pigeon died in the Cincinnati Zoo in 1914.

Bottom line: New research on why the passenger pigeon died out.