The Arctic has been warming about twice as fast as the rest of the globe. A new map from NASA illustrates this uneven warming.

The map below shows how high latitudes on Earth – the Arctic – have warmed more dramatically over the past decades than other parts of the globe. The map shows global temperature anomalies for the years 2000 to 2009. In other words, it doesn’t show absolute temperatures. Instead, it illustrates how much warmer or colder a region was in 2000-2009 compared to the norm for 1951-1980. 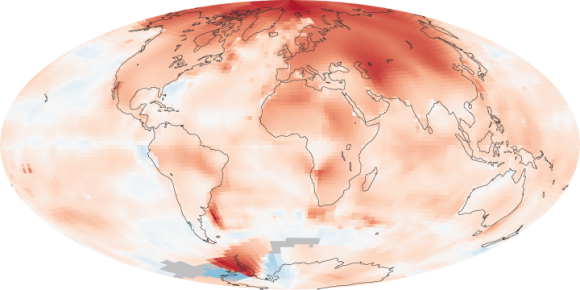 Global temperature anomalies. This map is comparing temperatures in the years 2000 to 2009 to temperatures norms elsewhere from 1951 to 1980. You can see that – during this period – the Arctic warmed more dramatically than other parts of the globe. Image via NASA.

This phenomenon is known as Arctic amplification.

Why is the Arctic warming faster than the rest of Earth’s globe? No one knows for sure, but the idea that it might has been discussed for a long time, decades at least, and the loss of sea ice is often mentioned as one contributing factor.

Read more about this map and about Arctic amplification from NASA.

Bottom line: The Arctic has been warming about twice as fast as the rest of the globe. A new map from NASA illustrates this uneven warming.