Satellite images show dying vegetation and wildfires across parts of Alaska, Canada and Russia. So scientists were surprised to find fast-growing white spruce.

Forests in some parts of Earth are thinning from wildfires, insect damage and droughts partially attributed to global warming. But some white spruce trees in the far north of Alaska have grown more vigorously in the last 100 years, especially since 1950, according to a new study.

These trees appear to be adapting to a rapidly warming climate, suggests the study, which was published in the journal Environmental Research Letters on October 25, 2011.

I was expecting to see trees stressed from the warmer temperatures. What we found was a surprise.

Members of the Lamont Tree-Ring Lab have traveled repeatedly to Alaska, including the Arctic National Wildlife Refuge in summer 2011. White spruce are evergreen trees at the edge of Alaska’s tundra – a flat, treeless part of the Arctic where the subsoil is permanently frozen. In an area where the northern treeline gives way to open tundra, the scientists removed cores from living white spruces, as well as long-dead partially fossilized trees preserved under the cold conditions.

By analyzing tree rings, they were able to look back at the growth rates of these trees for the past 1,000 years. They could note temperatures during that time by examining the width of the tree rings: in warm years, trees tend to produce wider, denser rings and in cool years, the rings are typically narrower and less dense.

Using this basic idea and samples from a 2002 trip to the refuge, Andreu-Hayles and her colleagues assembled a climate timeline for Alaska’s Firth River region going back to the year 1067. They discovered that both tree-ring width and density shot up starting 100 years ago, and rose even more after 1950.

Their findings match a separate team’s study earlier this year that used satellite imagery and tree rings to also show that trees in this region are growing faster, but that survey extended only to 1982.

These scientists say the added growth is happening as the Arctic warms rapidly. In fact, the high latitudes on Earth are warming more rapidly than the rest of the planet. While global temperatures since the 1950s rose 1.6 degrees F, parts of the northern latitudes warmed 4 to 5 degrees F. Study coauthor Kevin Anchukaitis, a tree-ring scientist at Lamont, said:

For the moment, warmer temperatures are helping the trees along this part of the forest-tundra border. It’s a fairly wet, fairly cool, site overall, so those longer growing seasons allow the trees to grow more.

These scientists suggest that the outlook might be less favorable for the vast interior forests that ring the Arctic Circle. Satellite images have revealed swaths of brown, dying vegetation and a growing number of catastrophic wildfires in the last decade across parts of interior Alaska, Canada and Russia. 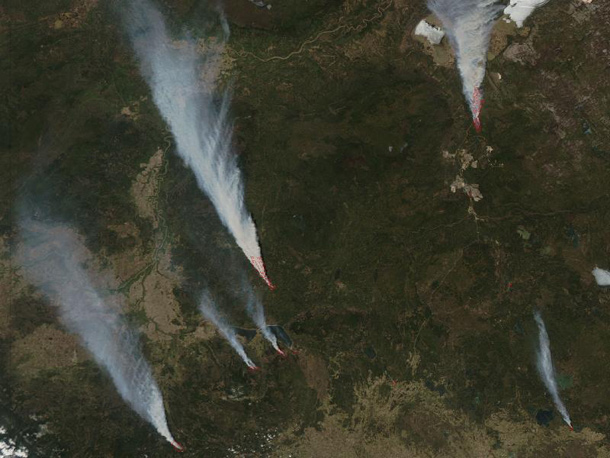 Evidence suggests forests elsewhere are struggling, too. In the American West, bark beetles benefiting from milder winters have devastated millions of acres of trees weakened by lack of water. A 2009 study found that mortality rates in once healthy old-growth conifer forests have doubled in the past few decades. Heat and water stress are also affecting some tropical forests already threatened by clear-cutting for farming and development.

Another paper in Science recently estimated that the world’s 10 billion acres of forest are now absorbing about a third of carbon emissions, helping to limit carbon dioxide levels and keep the planet cooler than it would be otherwise.

There are already signs that the treeline is pushing north, and if this continues, northern ecosystems will change. Warming temperatures have benefited not only white spruce, the dominant treeline species in northwestern North America, but also woody deciduous shrubs on the tundra, which have begun shading out other plants as they expand their range. As habitats change, scientists are asking whether insects, migratory songbirds, caribou and other animals that have evolved to exploit the tundra environment will adapt.

The health of forests globally is gaining attention, because trees are thought to absorb a third of all industrial carbon emissions, transferring carbon dioxide into soil and wood. Thus this study bolsters the idea that far northern ecosystems may play a future role in the balance of planet-warming carbon dioxide that remains in the air.

Bottom line: Tree-ring researchers at Lamont-Doherty Earth Observatory have learned that white spruce in northern Alaska have grown rapidly in the past 100 years, as climate warms.