How likely is a white Christmas?

Are you dreaming of a white Christmas? Here’s the historic probability for one, in the U.S. 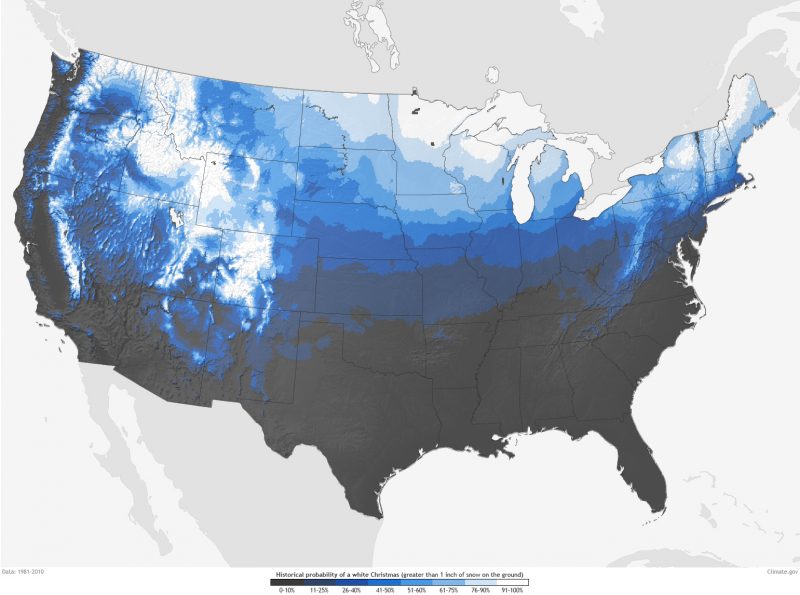 This map at shows the historic probability of there being at least 1 inch of snow on the ground in the Lower 48 states on December 25. Dark gray shows places where the probability is less than 10%, while white shows probabilities greater than 90%. Image via NOAA

For those of you dreaming of a white Christmas, here’s a map that shows which places in the contiguous United States have the best chance of having a snowy holiday this year, based on 30 years of climate records from NOAA. (Check out a bigger, cool interactive map here.)

Best chance of a white Christmas? Most of Idaho, Minnesota, Maine, upstate New York, the Allegheny Mountains of Pennsylvania and West Virginia, and, of course, the Rockies and the Sierra Nevada Mountains all have a high probability of seeing a snowy December 25. Aspen, Colorado, is just one of about a dozen locations boasting a 100% historical probability of seeing a white Christmas.

This map is based on the 1981–2010 Climate Normals. According to a NAOO statement:

While the map shows the probability of snow-covered ground on December 25, the actual conditions this year may vary widely.