Arctic sea ice continued its long-term decline in 2014. Meanwhile, sea ice on the other side of the planet was headed in the opposite direction. Why? 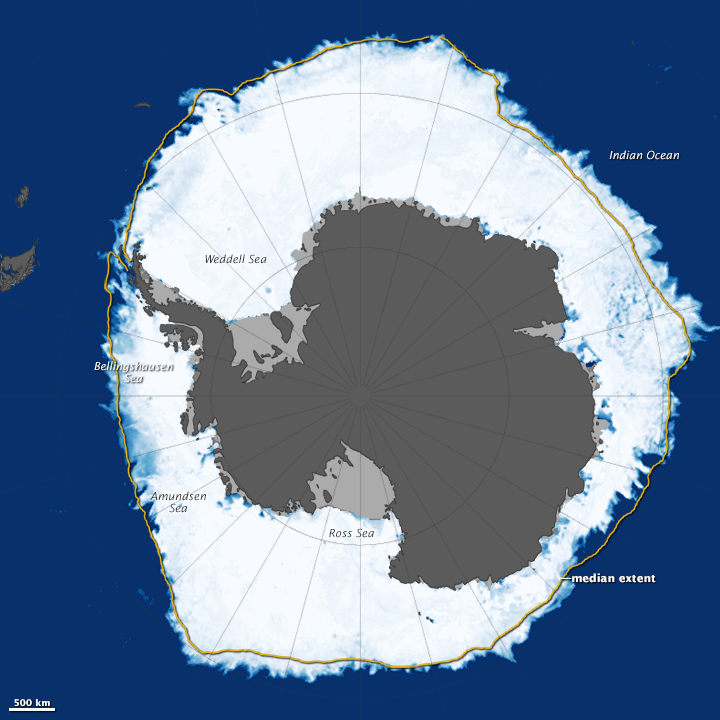 No one knows yet if – when the satellite data that helped create this map was acquired, on September 19, 2014 – Antarctic sea ice had reached its maximum extent for the year. But – as of September 19 – the five-day Antarctic sea ice average was greater than 20 million square kilometers (7.70 million square miles) for the first time in the modern satellite record. Image via NASA

On the northern half of Earth’s globe, Arctic summertime sea ice continued its long-term decline in 2014. The ice reached its annual minimum extent on September 17, the sixth-lowest Arctic sea ice minimum in the satellite record. Meanwhile, in Earth’s Southern Hemisphere, wintertime sea ice around the Antarctic continent was headed in the opposite direction. No one is sure yet if Antarctic sea ice has reached its maximum extent for the year, but we do know that the ice has already broken records this year. As of September 19, the five-day average had already surpassed 20 million square kilometers (7.70 million square miles) for the first time in the modern satellite record, according to the National Snow and Ice Data Center (NSIDC).

What’s going on here? If global warming is real, shouldn’t sea ice at Earth’s two poles be declining at the same rate? The answer is no. There’s no reason to believe that sea ice at Earth’s two poles would decline at the same rate, and there are likely explanations as to why Antarctic sea ice is increasing at this time, under conditions of Earth warming.

Before you hear those explanations, though, you need to understand one important piece of background. That is, Earth’s north and south poles are what Eric Holthaus at Slate calls geographic opposites. The Arctic is an ocean, surrounded by continents. The Antarctic is a continent surrounded by oceans.

That fact alone is the key as to why these two parts of the globe are subject to different sea-ice-forming and sea-ice-melting meteorological processes. 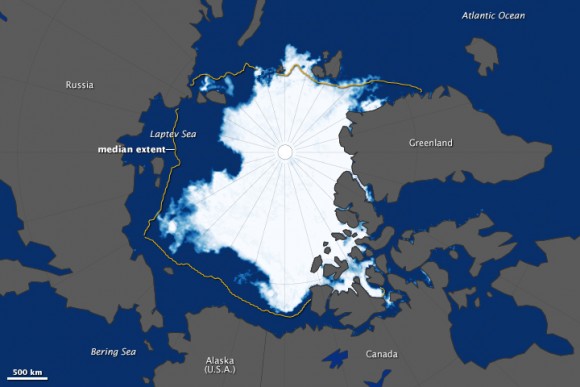 Extent of Arctic sea ice on September 17, 2014. Yellow line shows median sea ice extent observed in September from 1981 through 2010. Arctic sea ice minimum extent in 2014 was similar to 2013 and well below the 1981–2010 average. It was the sixth-lowest recorded in the modern satellite era. Although the Northwest Passage remained ice-bound in the summer of 2014, a patch of open water stretched far north of Siberia in the Laptev Sea, reaching 85 degrees north. It is the farthest north that scientists have observed open ocean water in the satellite era. Image via NASA

Nathan Kurtz is a cryospheric [frozen water] scientist at NASA Goddard. At NASA’s Earth Observatory site last week, he mentioned that Antarctic sea ice is not expanding as much as Arctic sea ice is declining. He said:

The overall trend of sea ice expansion in the Antarctic is only one-third of the magnitude of the decrease in Arctic sea ice.

He went on to say that many climate models actually predict a short-term increase in Antarctic sea ice, under conditions of global warming. He spoke of factors such as increasing fresh water and higher wind speeds that promote ice growth and expansion, and, as is clear from this year’s Antarctic sea ice maximum, these factors appear to be dominating right now.

Eric Holthaus is a meteorologist who writes the blog Future Tense on Slate. I like his posts because his explanations are very clear. On September 18, Holthaus went into more details about the factors causing a sea ice increase in Antarctica. He pointed out that we need to distinguish here between Antarctic sea ice and Antarctic land ice, saying:

Since sea ice floats in the ocean, its growth or melt doesn’t affect global sea levels. Antarctic land ice, on the other hand, does contribute to sea level rise, and it’s losing volume at a record pace. In fact, a frightening study earlier this year found that a key glacier in West Antarctica has entered an inevitable, slow-motion collapse phase, with dire consequences for the world’s coastal cities. A follow-up study last month for the first time put an upper bounds on the impacts of melting Antarctic glaciers in our children’s lifetimes.

He went on to explain some of the likely explanations for Antarctica’s sea ice increase this year:

One theory says that warmer ocean waters are more effective at melting the tongues of Antarctic land ice glaciers that stick out into the sea. The resulting excess of freshwater raises the freezing point of the surrounding salt water, allowing more ice to form.

Another theory is that the winds that encircle Antarctica are growing stronger, in part due to the hole in the ozone layer, and pushing ice farther and farther away from the continent, allowing additional ice to take its place closer to Antarctica’s frozen shores. This theory is favored by the British Antarctic Survey, and a number of recent papers have backed it up.

A third theory is that since warmer air can hold more water vapor, it’s likely that there’s more rain and snow falling over the Southern Ocean. That too could decrease the ocean’s salinity near the surface, boosting sea ice levels.

The reality is probably some combination of the above.

Bottom line: Earth overall is getting warmer. Sea ice surrounding Earth’s north pole is in a long-term decline. But sea ice around the south polar continent of Antarctica is increasing. Why?