Where will Tropical Storm Emily go?

On August 1, Tropical Storm Emily – the 5th named storm of the 2011 Atlantic hurricane season – formed with 40-mile-per-hour (mph) winds and a pressure reading of 1006 millibars (mb).

In this post, I will provide information about the difficulty forecasting Emily and the basics for tropical cyclones.

Tropical cyclones have three basic weaknesses:  dry air, moderate to high wind shear, and land interaction.  If they encounter one of these three, then a tropical cyclone will have a difficult time maintaining its convection and organization. We have been keeping a close eye on 91L since last Friday, and it took four days to finally develop into a tropical storm. Emily has been interacting with dry air and some wind shear the past couple of days.  These elements delayed 91L from developing a closed low, which was the main reason it was not classified until Monday evening.

What is the track for Tropical Storm Emily? How strong will she get?

These are excellent questions that do not have a simple answer.  There are a lot of things we have to take into account.  First of all, let’s take a look of the projected path of Tropical Storm Emily from the National Hurricane Center (NHC): 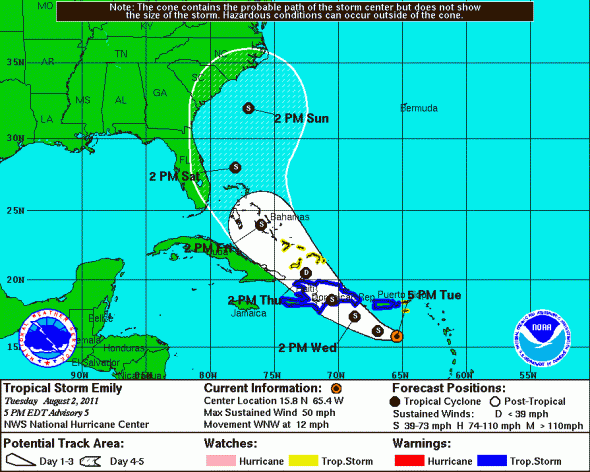 Next, let’s take a look at the spaghetti models:

As you can tell, most of the projected paths show Emily moving over Hispaniola, moving northwest, and eventually curving to the northeast out to sea due to a trough that will pick the system up.

With this in mind, Emily will have to travel over mountainous terrain that will disrupt the organization of the cyclone.  If the system is strong at this point, then the storm will weaken once it travels over Hispaniola.  If the storm is already weak at this point, then the mountains will disrupt the storm, but it will not destroy the system.   Key: a weaker system could become a stronger storm once it leaves Hispaniola and emerges back into the Atlantic Ocean.

Typically, a stronger cyclone feels the outside effects in the overall steering pattern.   Various models show a trough digging into the eastern United States later in the period, and this trough will be the forcing mechanism that will push Emily further north and eventually northeast out into the Atlantic.  However, various models have a different ideas on timing and strengths of the trough.

NHC originally forecasted Emily to become a Category 1 hurricane (75 mph) as it approaches Florida.  Now, Emily is forecast to remain a tropical storm.   However, I expect the track and intensity forecasts to change the next few days as there are plenty of uncertainties with this forecast.

My personal opinion: I doubt Emily will strengthen much before it approaches Hispaniola because it is still battling some dry air.  We will have to find out how weak Emily becomes after she moves over or near Hispaniola. If she can hold herself together, then we will have to pay very close attention to the southeast coast. Right now, I agree with the NHC forecast, but question whether or not the track is too far east. Intensity forecasts are very difficult, and highly depends on how Emily reacts to the mountains of Hispaniola. 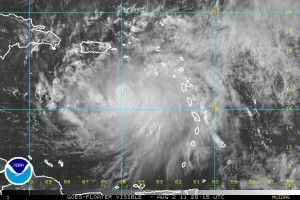 For now (evening of August 2, 2011), anyone along the eastern United States coast should keep a close eye on Tropical Storm Emily. Rip currents could become an issue by Friday and Saturday along the Florida, Georgia, and Carolina’s coast.  Emily will likely brush the eastern coast as she eventually moves northeast.  If you live along the coast, now is a great time to have a hurricane safety plan ready.

I’ll have another update about Emily later this week.