Where is the missing Deepwater Horizon oil?

Researchers trace oil from the 2010 Deepwater Horizon spill to the Gulf of Mexico’s deep floor. 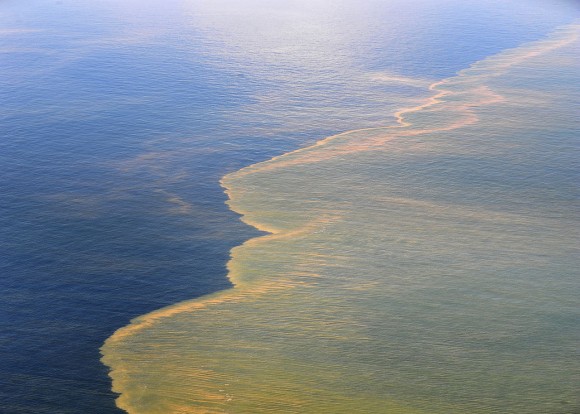 The Deepwater Horizon oil is likely at the bottom of the Gulf of Mexico. Photo credit: Wikimedia Commons

In the more than four years since the 2010 Deepwater Horizon spill in the Gulf of Mexico, an unsolved mystery has been the location of millions of barrels of submerged oil thought to be trapped in the deep ocean.

But now some of the missing oil has been found, say scientists. In a new study published in the Proceedings of the National Academy of Sciences yesterday, a team of researchers have been able to describe the path about 2 million barrels of oil followed to its resting place on the deep ocean floor.

The U.S. government estimates the Macondo Well’s total discharge – from April until the well was capped in July – at 5 million barrels.

Scientist David Valentine of the University of California, Santa Barbara (UCSB) and colleagues from the Woods Hole Oceanographic Institution (WHOI) and the University of California, Irvine, analyzed data from more than 3,000 samples collected at 534 locations over 12 expeditions, and identified a 1,250-square-mile patch of the sea floor on which 4 to 31 percent of the oil trapped in the deep ocean was deposited. That’s the equivalent of 2 to 16 percent of the total oil discharged during the accident. 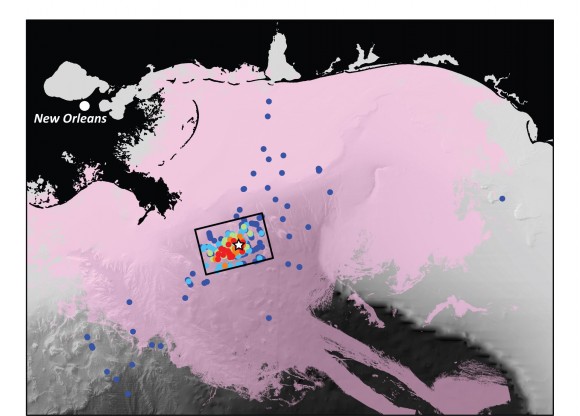 The fallout of oil created thin deposits that are most extensive to the southwest of the Macondo Well. The oil is concentrated in the top half-inch of the sea floor and is patchily distributed. Valentine said:

Based on the evidence, our findings suggest that these deposits come from Macondo oil that was first suspended in the deep ocean and then settled to the sea floor without ever reaching the ocean surface.

The pattern is like a shadow of the tiny oil droplets that were initially trapped at ocean depths around 3,500 feet and pushed around by the deep currents. Some combination of chemistry, biology and physics ultimately caused those droplets to rain down another 1,000 feet to rest on the sea floor.

The researchers were able to identify hotspots of oil fallout in close proximity to damaged deep-sea corals. According to the researchers, this data supports the previously disputed finding that these corals were damaged by the Deepwater Horizon spill. Valentine said:

The evidence is becoming clear that oily particles were raining down around these deep sea corals, which provides a compelling explanation for the injury they suffered. The pattern of contamination we observe is fully consistent with the Deepwater Horizon event but not with natural seeps — the suggested alternative.

While the study examined a specified area, the scientists argue that the observed oil represents a minimum value. They say that oil was likely deposited outside their study area but so far has largely evaded detection because of its patchiness.

Don Rice is program director in the National Science Foundation’s Division of Ocean Sciences. He said:

This analysis provides us with, for the first time, some closure on the question ‘Where did the oil go and how?’. It also alerts us that this knowledge remains largely provisional until we can fully account for the remaining 70 percent.

Bottom line: In a new study in the Proceedings of the National Academy of Sciences, a team of researchers describe the path of oil from the 2010 Deepwater Horizon spill in the Gulf of Mexico to its resting place on the deep ocean floor.