Photos shows the smoke sucked into an area of strong convection at the center of the thunderstorm, at speeds that can reach 100 miles (160 kilometers) per hour.

Researchers in NASA’s DC-8 flying laboratory captured this photo of smoke from Colorado’s High Park fire encountering a thunderstorm. It shows smoke from Colorado’s High Park Fire – which started June 5 and burned all month – encountering a thunderstorm and being sucked upward by the roiling motion of the storm’s interior. NASA Langley Research Center scientist James Crawford took this photo on June 22, 2012. 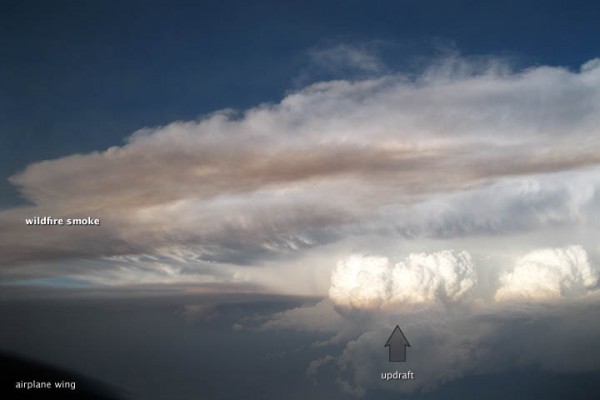 The smoke is being partially sucked in by an area of strong convection – a strong movement, like boiling water – at the center of the thunderstorm. In this region of the storm, the upward pull of convection can suck pollutants upward at speeds up to 100 miles (160 kilometers) per hour, according to NASA scientists.

NASA’s DC-8 flying laboratory has just finished a six-week hunt for thunderstorms. A total of 100 researchers from 29 organizations participated in the Deep Convective Clouds and Chemistry (DC3) – based in Kansas – which flew many times to Alabama, Colorado, and Oklahoma to learn more about how storms affect the chemistry of Earth’s upper troposphere.

They called the June 22 flight over northeastern Colorado a “highlight” of the campaign. NASA said:

The High Park fire, a fast-spreading blaze that had ignited on June 9 and was still burning, had sent a plume of smoke billowing northeast toward Wyoming. Meanwhile, a pair of strong storms had emerged in the general path of the smoke. At points, it looked like the storms might pass north of the smoke plume, but satellite imagery showed the plume heading straight for the storms during the middle of the flight.

According to a summary of the flight posted on the campaign’s website, the DC-8 pilot brought the plane beneath the storm at an altitude of about 9,000 feet and then ascended upward to the storm’s anvil at about 35,000 feet, flying directly through the storm’s core and a visible layer of smoke at around 25,000 feet in the process.

The High Park Fire, by the way, is now 100% contained, although firefighters are still patrolling its perimeter looking for flareups. Read more about the High Park Fire from InciWeb.