When flying through the bat cave, be sure to bring a map

Bats supplement echolocation with mental maps of their surroundings.

It took about two weeks of living in my current abode before I was able to navigate through the bedroom in the dark without slamming into the corners of a slightly oversized bed frame. The learning process was an unpleasant one of trial and error and muttering curses at inanimate objects. But that’s because I couldn’t use echolocation. The ability to pinpoint pointy furniture by bouncing high frequency sounds off it would have spared me numerous bruises, but sadly echolocation – or biosonar – is not in my species’ toolkit. It’s more the territory of bats.* Biosonar allows bats with less than stellar eyesight to survey their surroundings for both obstacles and prey, which is cool and all, but is it really enough to assure a collision-free flight? After all, they’re not just puttering around a terrestrial apartment, they’re zipping through the skies at high speeds. There isn’t much room for error.

Scientists at Brown University suspected that bats were using more than just echolocation to find their way in the dark. Working with the species Eptesicus fuscus (the big brown bat) in a study published in the Journal of Experimental Biology, they demonstrated that these bats retain some spatial memory of the areas they fly through. Echolocation helps bats avoid crashing into trees and such, but it also supplies them with information to form mental maps of their environment. By supplementing their biosonar with these maps, bats can fly a familiar course with more precision and less effort, possibly freeing them up to focus on searching out their nightly dose of insects. 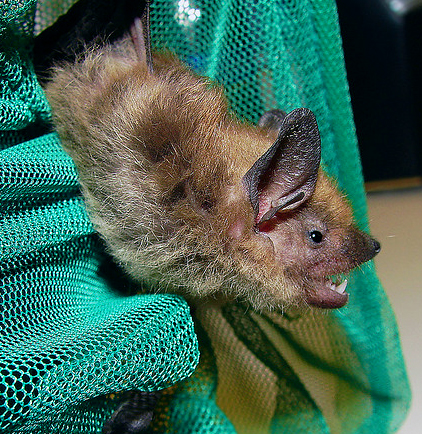 The bats’ flying prowess was pitted against an obstacle course comprised of floor-to-ceiling chains (i.e., the animals couldn’t just duck under the chains, they had to find a way around). The flight routes for each test subject were tracked with thermal video cameras, and their echolocation activity was captured with an ultrasonic microphone (we’ll get to reason for the audio recording in a moment). One by one, each bat faced off with the obstacle course for about five minutes a day over the course of six days, and, aside from one oddball,** all quickly developed consistent flight patterns. Essentially, once they found a route through the chains that worked, they mostly stuck to it. Additionally, each bat settled on its own unique path. There wasn’t a single ideal way to navigate the course, and individuals differed on their preferred routes.

Once the bats had established their individual flight paths, the researchers tried releasing them into the obstacle course from different parts of the room. If the bats were just following a step-by-step list of directions (2 flaps to the left, then turn right and go 5 flaps, etc.) the new start point should completely throw them off. But the bats were unperturbed and easily found their way back to their unique routes, suggesting that they had grasped the overall arrangement of the room and were thus able to orient themselves regardless of their starting position.

As bats stabilized their flight patterns, their biosonar call rate also changed. Echolocation is a peculiar way of sensing one’s environment. While vision takes in information continuously, echolocation instead provides a series of snapshot-like updates of the surroundings. The more rapid the call rate, the more frequent the updates. Bats are known to increase their call rate to manage the denser data of more cluttered spaces. In the obstacle course experiments, the bats average call rates decreased from about 20 Hz to about 12 Hz as they grew accustomed to the new space. Essentially, with the formation of their internal maps, they didn’t require as many biosonar updates to find their way around.

In addition to freeing up the bats to focus on hunting rather than just not bumping into things, the authors point out that such mental maps could also be an asset for successfully capturing prey. Insects move quickly, and it’s easier to snatch them if you know where you’re going.

How long does the batty brain hold on to this kind of spatial information? After the initial flight trials, the researchers gave the bats a month away from the obstacle course before throwing them into it again. Would the bats still be able to use what they’d learned? Would the reintroduction be just like riding a bike, or more like attempting trigonometry well after high school? To make things more interesting (without actually betting money) another element was added. Half the bats were brought back into the exact same course they’d encountered previously. For the other half, however, the course was re-arranged into a mirror image of itself.

The bats reintroduced into the same-old-same-old course performed swimmingly, quickly resuming their individual flight paths. But the bats subjected to the mirror configuration had some issues. While they did find new stable flight patterns, they were a bit slow about it, as if the memory of the original course was confusing them. Here they were back in their old house, but some jerk scientists had gone and moved the furniture around.

* More specifically, bats of the suborder Microchiroptera, aka microbats. The other group, megabats, get by with more ordinary senses like sight and smell.

** This particular bat marched to its own drummer in more ways than one. In addition to being reluctant to form a stable flight path, it also flew considerably faster than the rest of the bats.