When Earth’s continents rose above its oceans

Earth’s thick continental crust – the land under our feet – may have risen from the oceans half a billion years earlier than scientists previously thought. 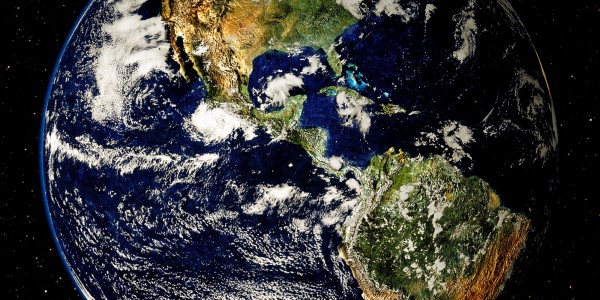 New research surrounding the formation of Earth’s continents suggest that the buoyant terrestrial crust on which we live rose above Earth’s oceans over 3 billion years ago – half a billion years earlier than previously thought – and might be linked to the onset of the planet’s plate tectonics. Published in June, 2015 Nature Geoscience, these researchers analyzed the geochemical data from over 13,000 samples of rocks from both ocean crust and continental crust to arrive at these conclusions. Some of these samples were more than 4 billion years old.

Earth is the only known planet in the solar system with continents and wide ocean basins. The continents rise about 2.5 miles (4 km) above the ocean floor. Composed of more buoyant materials than seafloor crust, they’re an average about 21 miles (35 km) deep, in contrast to about 4 miles (7 km) thick for the crust below the oceans. Most people recognize seven continents – from largest to smallest, Asia, Africa, North America, South America, Antarctica, Europe, and Australia – but sometimes Europe and Asia are considered one continent, called Eurasia.

We today know a lot about Earth’s crust; for example, we know it is subject to continuous tectonic activity, whereby great land plates (both continental and oceanic) move slowly over our world’s underlying mantle.

But we still know very little about the earliest days of continents. Exactly when the continents formed, and how they formed, remains controversial. Previous studies had suggested that the crust surfaced within the past 2.5 billion years. This newest study – led by geochemist Bruno Dhuime of the University of Bristol in England – used an analysis of radioactive decay to shift the time at which the continents arose 500 million years earlier.

Cin-Ty Lee of Rice University, who was not involved in the study, has been widely quoted as saying:

They are showing when continents actually emerged from the oceans.

Continents certainly existed early in Earth’s history, but perhaps many were submerged. 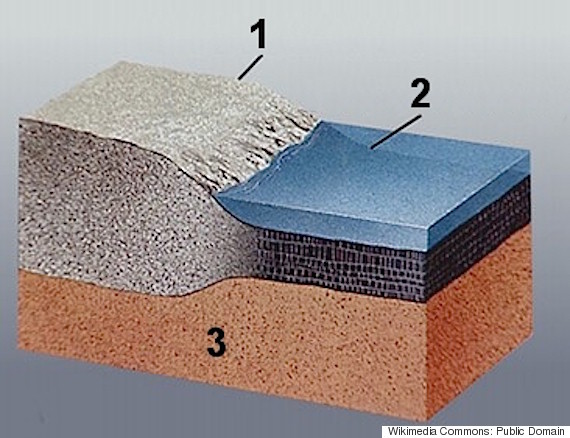 A cross-section infographic of some of Earth’s layers, depicting the continental crust (1), the oceanic crust (2), and the upper mantle (3). Image via Wikimedia Commons via Huffington Post.

Previous estimates of the age of the Earth’s continents have been imprecise due to the constant re-melting and reforming the Earth’s mantle. But these researchers say that, by measuring radioactive decay, they were able to establish the ratio of specific isotopes that appear in the continental crust at specific times.

Specifically, they measured isotopes of rubidium (Rb) and strontium (Sr), which change in chemical structure after magma heating and cooling. The research concluded that the isotopic ratio of both elements increased around 3 billion years ago. This increase is linked to the continental crusts rising above the oceans.

While it is uncertain why continental crust made its first appearance, the leading theory links the emergence of continents to the onset of plate tectonics. As Earth’s land plates began to shift and move, less dense rock may have been forced upward, shaping the continents we see today on Earth’s crust. 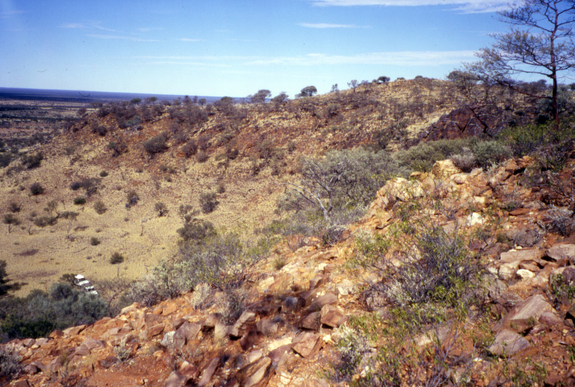 Jack Hills, Australia, where – in 2014 – rocks were found to contain the oldest known minerals on Earth, a 4.4 billion-year-old zircon. Image via John Valley, University of Wisconsin. Read more about the 2014 study. If the continents did not arise from the oceans until 3 billion years ago, then the oldest minerals found on Earth today were submerged beneath the sea for well over a billion years.

Bottom line: A study led by geochemist Bruno Dhuime of the University of Bristol in England suggests Earth’s thick continental crust – the land under our feet – may have risen from the oceans half a billion years earlier than scientists previously thought, or 3 billion years ago.