A new study on Antarctica’s Blood Falls reveals the origins of its unique, bright red discharge, info that might help in the search for life elsewhere in our solar system. 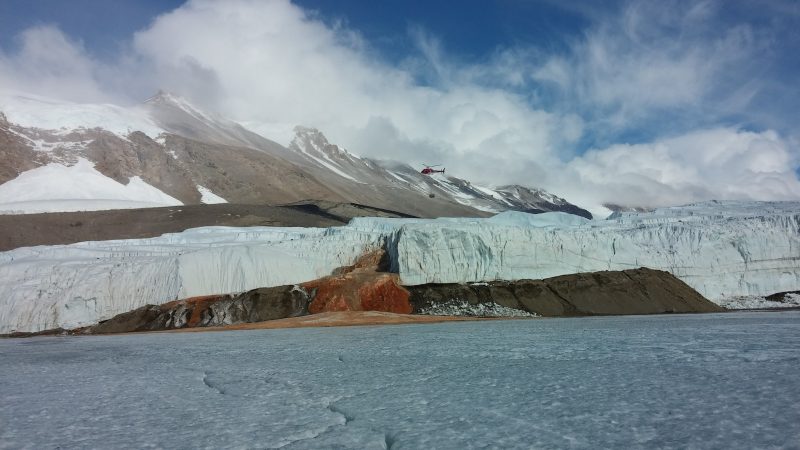 Amid Antarctica’s vast stretches of glittering white snow and ethereal blue glacier ice is the famous Blood Falls. Situated at the terminus of Taylor Glacier in the McMurdo Dry Valleys, Blood Falls, which is an iron-rich, hypersaline discharge, spews bold streaks of bright-red brine from within the glacier out onto the ice-covered surface of Lake Bonney.

Australian geologist Griffith Taylor was the first explorer to happen upon Blood Falls in 1911, during one of the earliest Antarctic expeditions. At the time, Taylor (incorrectly) attributed the color to the presence of red algae. The cause of this color was shrouded in mystery for nearly a century, but we now know that the iron-rich liquid turns red when it breaches the surface and oxidizes––the same process that gives iron a reddish hue when it rusts.

The discharge from Blood Falls is the subject of a new study, published February 2, 2019, in the Journal of Geophysical Research: Biogeosciences, Researchers sought to discern the origin, chemical composition, and life-sustaining capabilities of this subglacial brine. According to lead author W. Berry Lyons of The Ohio State University and his co-researchers:

The brine is of marine origin that has been extensively altered by rock-water interactions.

Researchers used to believe that Taylor Glacier was frozen solid from the surface to its bed. But as measuring techniques have advanced over time, scientists have been able to detect huge amounts of hypersaline liquid water at temperatures that are below freezing underneath the glacier. The large quantities of salt in hypersaline water enable the water to remain in liquid form, even below zero degrees Celsius [32 degrees Fahrenheit]. 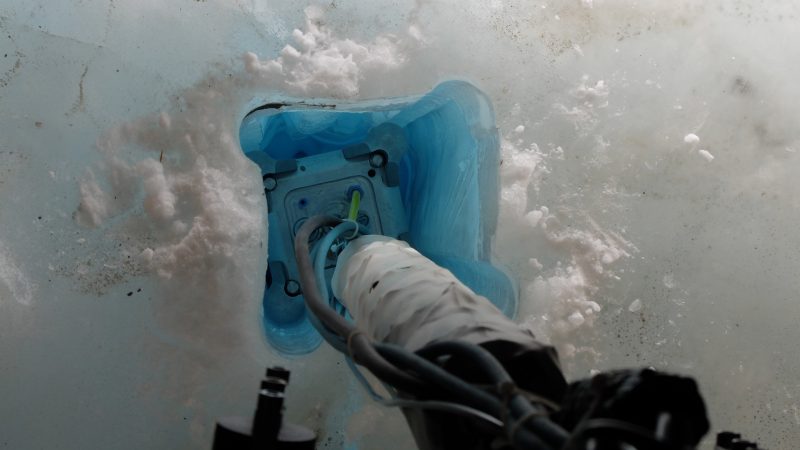 Overhead view of the IceMole, as it gradually descends into Taylor Glacier, melting ice as it goes. Image via German Aerospace Center DLR/Flickr.

Seeking to expand on this recent discovery, Lyons and his co-researchers conducted the first direct sampling of brine from Taylor Glacier using the IceMole. The IceMole is an autonomous research probe that clears a path by melting the ice that surrounds it, collecting samples along the way. In this study, the researchers sent the IceMole through 56 feet (17 meters) of ice to reach the brine beneath Taylor Glacier.

The brine samples were analyzed to obtain information on its geochemical makeup, including ion concentrations, salinity, and other dissolved solids. Based on the observed concentrations of dissolved nitrogen, phosphorus, and carbon, the researchers concluded that Taylor Glacier’s subglacial environment has, along with high iron and sulfate concentrations, active microbiological processes – in other words, the environment could support life.

To determine the origin and evolution of Taylor Glacier’s subglacial brine, Lyons and his co-researchers pondered other studies’ conclusions in comparison to their results. They decided the most plausible explanation was that the subglacial brine came from an ancient time period when Taylor Valley was likely flooded by seawater, though they did not settle on an exact time estimate. 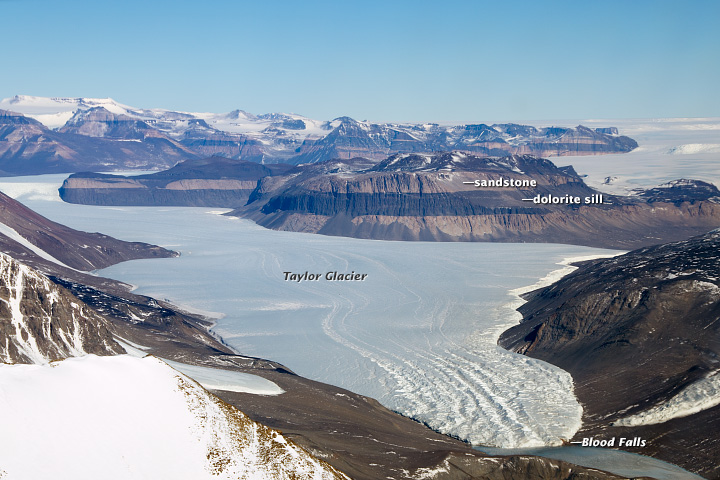 An aerial view of Taylor Glacier and the location of Blood Falls. Image via Wikimedia Commons.

In addition, they found that the brine’s chemical composition was much different than that of modern seawater. This suggested that as the brine was transported throughout the glacial environment over time, weathering contributed to significant alterations in the chemical composition of the water.

This study provides insights not only for subglacial environments on Earth but also potentially to other bodies within our solar system. Seven bodies, including Titan and Enceladus (two of Saturn’s moons) and Europa (one of Jupiter’s moons), Pluto and Mars are thought to harbor sub-cryospheric oceans.

Lyons and his co-researchers concluded that this subglacial brine environment likely is conducive to life. The ability of sub-cryospheric environments such as this one to support life on Earth hints at an increased possibility of finding life in similar environments elsewhere in our solar system.