Ten thousand years ago, large mammals of the Arctic, like the woolly mammoth, went extinct. What caused it? Climate change? Disease? Over-hunting by humans?

A common perception of Ice Age landscapes as grasslands grazed by large mammals, such as the woolly mammoth, has been disproven in a study published in the February 05, 2014 issue of Nature. An interdisciplinary team of scientists from 12 countries has shown that Arctic flora over the past 50,000 years was dominated by herbaceous flowering plants that were a nutrient-rich food for large plant-eating mammals. But 25,000 to 15,000 years ago, much of Arctic land was covered in ice, leading to a precipitous decline in the diversity of herbaceous flowering plants. During this period, large mammals just barely survived in ice-free areas. But as the climate changed at the end of the Ice Age, herbaceous plants further declined, replaced by grasses. The less nutritious grasses were a poor food substitute, leading to the eventual extinction of large mammals in the Arctic about 10,000 years ago.

Most images of Woolly Mammoth depict them in grasslands, such as this illustration. New evidence indicates that Ice Age flora was mostly herbaceous flowering plants. Image credit: Mauricio Antón via Wikimedia Commons.

There’s been much debate over the extinction of Arctic woolly mammoth, woolly rhinoceros, steppe bison, horse, and musk ox that occurred 10,000 years ago. Blame has been placed on disease outbreaks and over-hunting by humans. The most popularly-considered cause for the extinctions, however, has been climate change but the mechanisms that caused the demise of these creatures was not well understood.

The Arctic land flora of the Ice Age had been thought to be predominantly grasses and sedges, based on studies of pollen found in permafrost. However, new advances in DNA analysis have made it possible to extract and sequence the DNA of Ice Age plant materials preserved in Arctic permafrost. Additional information about plant preferences have been found in the stomach contents of carcasses and in animal droppings of extinct woolly rhinos, woolly mammoth, and other extinct large herbivores, preserved in permafrost. Professor Mary Edwards, at the University of Southampton in the United Kingdom explained the study and the DNA analysis results in a press release,

Permafrost is frozen soil and sediment which acts like a giant freezer, preserving countless plant and animal remains from ancient ecosystems. It is ideal for this kind of study because the DNA isn’t lost to the normal processes of decay.

By analyzing this preserved DNA, we have found that flowering plants, known as forbs, were far more prevalent than previously thought. In fact, forbs have been overlooked in many past studies of ice-age ecosystems, but this study shows they may have been a critical source of nutrition in the diet of mammalian megafauna – huge animals such as mammoth, woolly rhino, bison and horse.

Analyzing plant DNA has provided us with a unique perspective on this now extinct northern ecosystem and given new insights into how such large animals could survive extreme cold and harsh ice-age conditions. 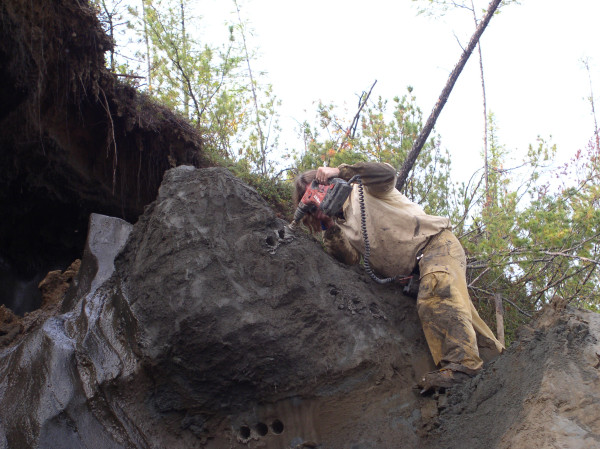 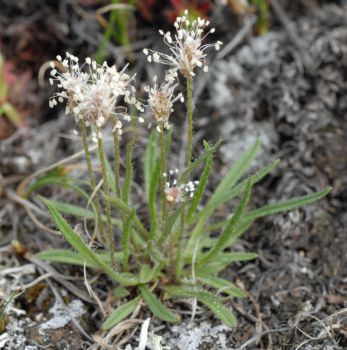 Northern Plantain, a herbaceous flowering plant. DNA from this plant was found in the Siberian permafrost. Image credit: University of Sussex.

Permafrost samples were obtained in Siberia, Canada, and Alaska. Much of the preserved vegetation was in the form of roots and other plant parts that once grew on the surface where extinct large mammals walked. DNA extracted from the frozen plant material was sequenced, then compared to that of modern day related northern herbaceous plants and museum specimens. Plants older than 10,000 years were found to be mostly forbs. Stomach contents from frozen carcasses of extinct mammals, and preserved animal droppings, recovered from permafrost, showed that the animals had a preference for forbs.

Professor Dale Guthrie, at the University of Alaska-Fairbanks, explained the significance of the discovery in a University of Southampton web page about this study.

Large amounts of forbs growing are not usually found in modern ecosystems that are dominated by large grazing animals such as bison. Ecologists studying the ancient ecosystem speculate under ice-age conditions, the grazing animals were part of a positive cycle in which their droppings fertilized the soil and enabled the forbs to flourish. At the end of the ice age, conditions changed dramatically, becoming warmer and wetter. These conditions no longer favoured the mammal-forb relationship, and other types of plant (such as woody shrubs and trees) began to dominate the landscape. This shift likely had serious consequences for the animals and may have contributed to the large number of extinctions that happened at the end of the ice age.

A video by one of the scientists in this study, Per Möller of Lund University in Sweden, describing the project.

Professor Eske Willerslev, an ancient DNA researcher at the Natural History Museum of Denmark, commented in another press release,

We knew from our previous work that climate was driving fluctuations of the megafauna populations, but not how. Now we know that the loss of protein-rich forbs was likely a key player in the loss of the ice age megafauna. Interestingly one can also see our results in the perspective of the present climate changes. Maybe we get a hold on the greenhouse gases in the future. But don’t expect the good old well-known vegetation to come back when it becomes cooler again after the global warming. It is not given that the ‘old’ ecosystems will re-establish themselves to the same extent as before the warming. It’s not only climate that drives vegetation changes, but also the history of the vegetation itself and the mammals consuming it. 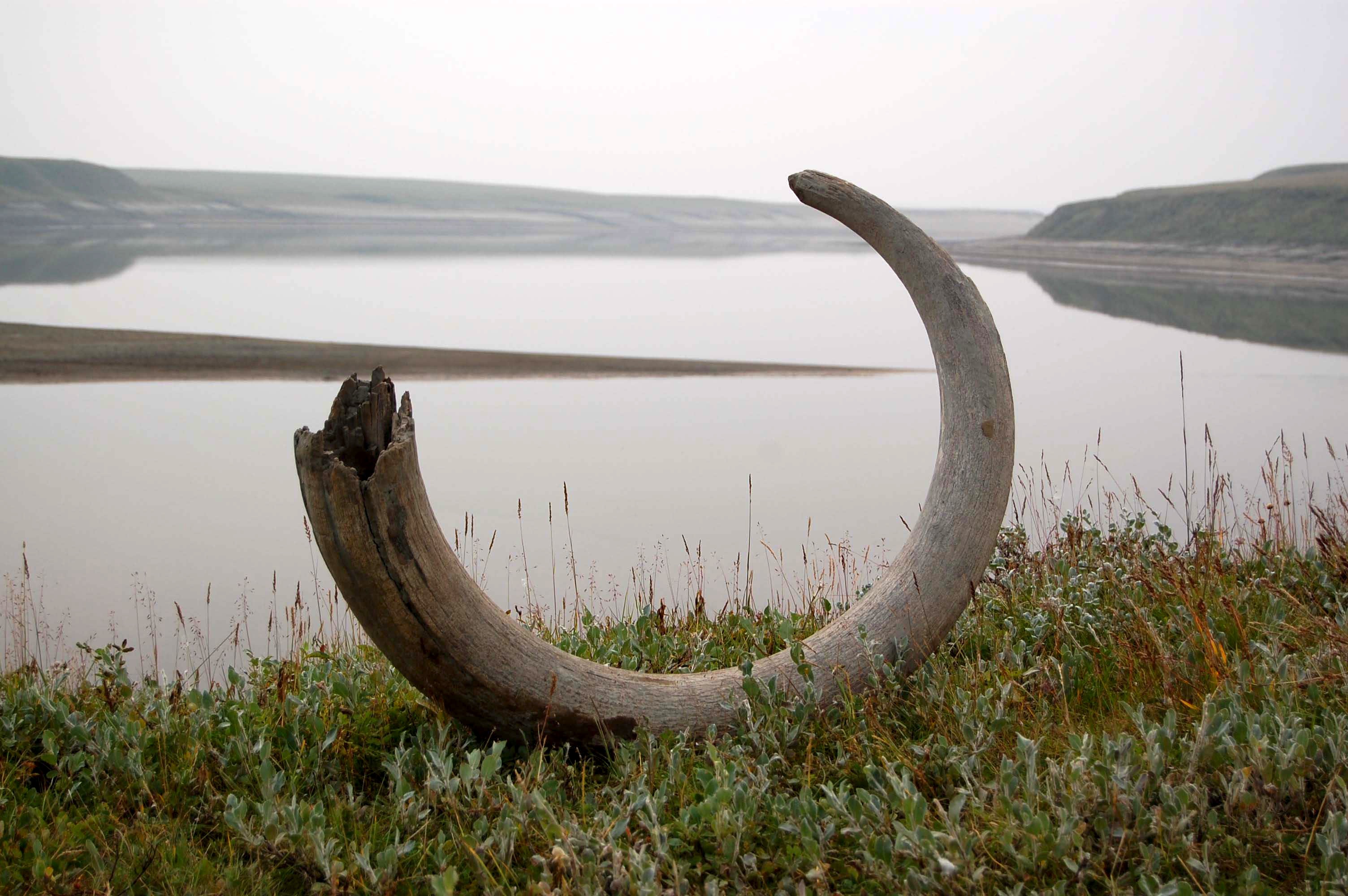 New research has revealed that ancient Arctic land flora, as far as 50,000 years ago, was not just grassland, but predominantly herbaceous flowering plants that served as protein-rich food for large mammals. Twenty-five thousand to 15,000 years ago, much of this region was covered in ice, causing a major decline in the diversity of herbaceous flowering plants. The large mammals continued to survive, just barely, in some ice-free areas. But at the end of the last Ice Age, the changing climate reshaped the Arctic land vegetation ensemble — herbaceous plants did not re-establish in their former habitats, and were mostly replaced by grasses. Scientists suggest that the less nutritious grasses could not sustain the large mammals, resulting in their extinction about 10,000 years ago. These findings, by an international team of scientists, were published on February 05, 2014, in the journal Nature.