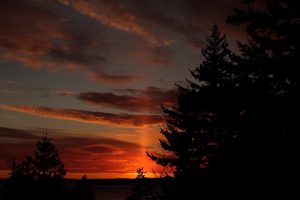 Penelope Parson from Brooklin, Maine, captured this photo of a solar pillar on January 8, 2021, just after sunset. She explained that she has “never seen a sun pillar!.” Thank you Penelope!

Thank you! Your submission has been received!
Oops! Something went wrong while submitting the form.
END_OF_DOCUMENT_TOKEN_TO_BE_REPLACED