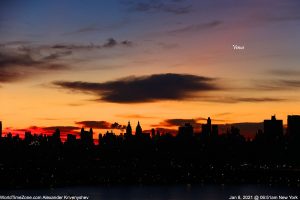 Alexander Krivenyshev in New York City, New York, captured this photo of Venus on January 8, 2021, right before sunrise. He explained that “the ‘morning star’ Venus shines in the dawn sky above New York city.”

Thank you! Your submission has been received!
Oops! Something went wrong while submitting the form.
END_OF_DOCUMENT_TOKEN_TO_BE_REPLACED