And where else in the U.S. might be vulnerable to sinkholes?

On Thursday, February 28, 2013 – late at night, inside a house near Tampa, Florida – a sinkhole suddenly opened under a bedroom, apparently swallowing one man. He is now believed to be dead, his body buried in the sinkhole that today stretches 20 feet wide and more than 50 feet deep (6 meters wide and 15 meters deep).

Sinkholes are a common feature of Florida’s landscape, and they happen elsewhere around the world as well. Prior to the February 28 sinkhole in Florida, one of the last big sinkhole incidents took place in May 2010, when a sinkhole suddenly opened up in Guatemala City, swallowing a three-story building and leaving a steep, 100-foot deep hole in the middle of an urban neighborhood. Meanwhile, the Florida Geological Survey’s database lists thousands of sinkhole-like incidents in Florida. You can look here for a county-by-county guide to Florida sinkholes, presumably for home buyers. And other parts of the U.S. and world are prone to sinkholes as well. What causes them? 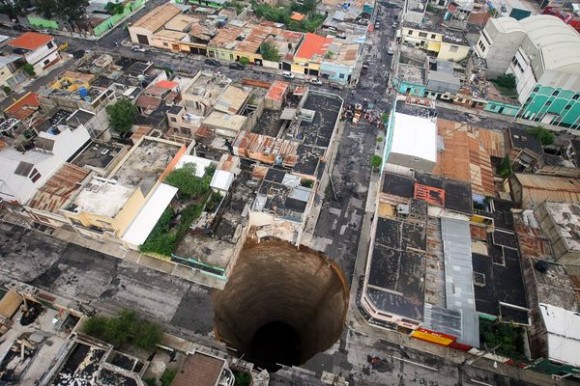 May 2010 sinkhole in an urban area in Guatemala. Photo by Paulo Raquec via National Geographic. 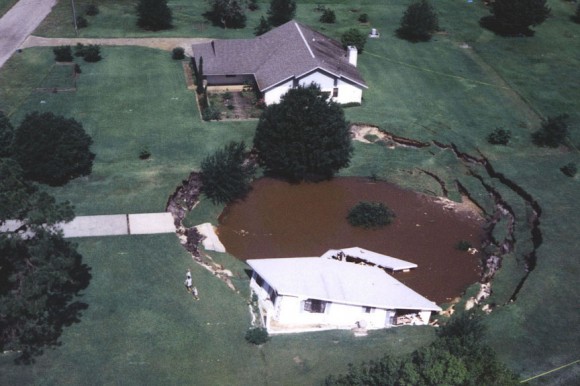 An example of a Florida sinkhole via usbuildingevaluations.com 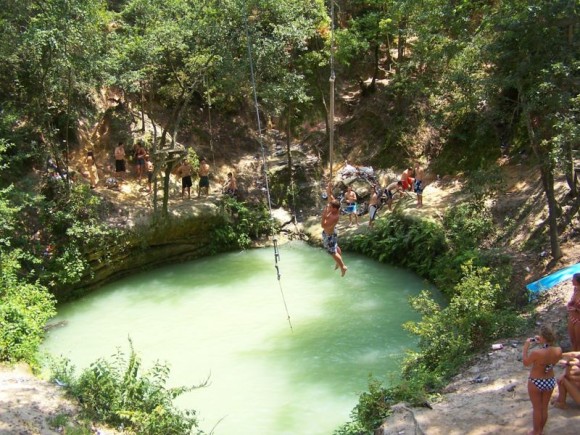 Some Florida sinkholes have become popular swimming areas. This one is called Devil’s Sinkhole. It’s in Hawthorne, Florida. Image via Wikimedia Commons.

According to the Florida Department of Environmental Protection, the two most common carbonate rocks in Florida are limestone and dolomite. These rocks tend to erode when exposed to acidic water. Most rainwater is already slightly acidic, and may become more so by passing through decaying plant debris. Limestone is a porous rock, and acidic water can percolate down through it. Over eons, this process of erosion has created “extensive underground voids and drainage systems in much of the carbonate rocks throughout the state,” according to the Florida Department of Environmental Protection.

Sometimes slowly, and sometimes suddenly, overlying sediments collapse into these underground cavities, and a sinkhole is born. 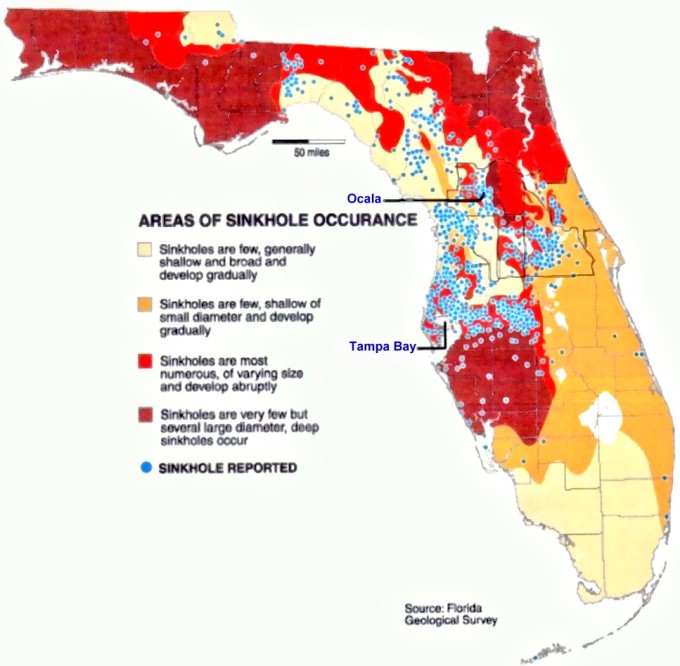 Human activity can create sinkholes, too, for example, via collapsed or broken sewer and drain pipes or broken septic tanks, improperly compacted soil after excavation work, and buried trash, logs and other debris. They can also occur from the overpumping and extraction of groundwater and subsurface fluids. In places like Louisiana, there are reports of the occasional collapse of abandoned mines to form sinkholes. Some sinkholes form when the land surface is changed, maybe when when industrial and runoff-storage ponds are created. In those cases, the weight of the new material above ground can trigger an underground collapse, creating a sinkhole.

Not all Florida sinkholes have been documented. How could they be? Such a thing would require continuous monitoring. For example, according to an article at SunSentienal.com, there was a swell of reported sinholes in the 1980s, when the Florida Sinkhole Research Institute was actively collecting data, and another one in the early 2000s.

This map shows the different types of rocks in different areas of the U.S. that might be prone to being dissolved by ground water. In other words, sinkholes might form in these places. Map via USGS.

By the way, sinkholes are found all over the world. In the U.S., sinkholes are especially common in Texas, Alabama, Missouri, Kentucky, Tennessee, Pennsylvania, and Florida, according to the U.S. Geological Survey.

What happened in Florida on February 28, 2013 was a frightening tragedy. The victim was 36-year-old Jeff Bush. His brother told rescue crews that Bush had just gone to bed around 11 p.m. on the night of the incident, when the whole family heard a loud crash and Bush screaming for help. Hillsborough County Fire Rescue spokeswoman Jessica Damico described the scene found by the brother:

When he got there, there was no bedroom left. There was no furniture. All he saw was a piece of the mattress sticking up.

Bottom line: Sinkholes occur commonly in Florida and in other parts of the U.S. and world. The February 28, 2013 Florida sinkhole that opened under a bedroom apparently caused one death. Sinkholes in Florida occur because the state has many underground voids and drainage systems carved from the carbonate rocks throughout the state. When overlying layers of ground collapse into these voids, a sinkhole is born.