Wet weather may have helped to quell 2013 wildfire season

The amount of U.S. land burned by wildfires during 2013 was 41% lower than the 10-year average, according to preliminary estimates.

Wildfires burned less land than expected across the U.S. in 2013, according to preliminary data released from the National Interagency Fire Center (NIFC) in Boise, Idaho on December 27, 2013. Atypical weather patterns might have helped to quell the 2013 wildfire season, officials say. While the 2013 wildfire season was quieter than usual, it was still one of the most deadly for firefighters.

Over the past 10 years, wildfires in the U.S. have burned an average of 7,306,760 acres of land every year. The amount of land burned annually by wildfires has noticeably increased since record keeping began in the 1960s. As I reported in an earlier post, it’s not entirely clear why wildfire activity has been so high over the past decade, but it is likely due to a combination of factors such as forest insect infestations, invasions of non-native species, past fire exclusion practices that allowed for the buildup of flammable debris, climate change and the growth of the urban-wilderness interface. 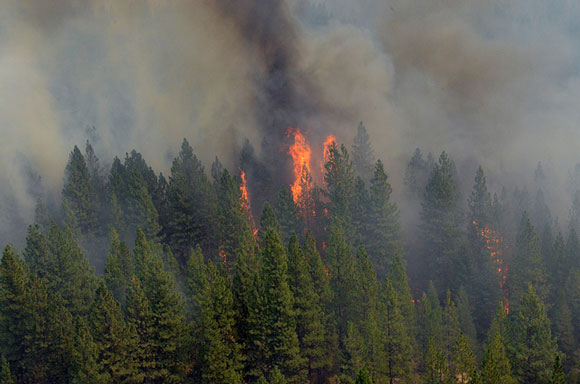 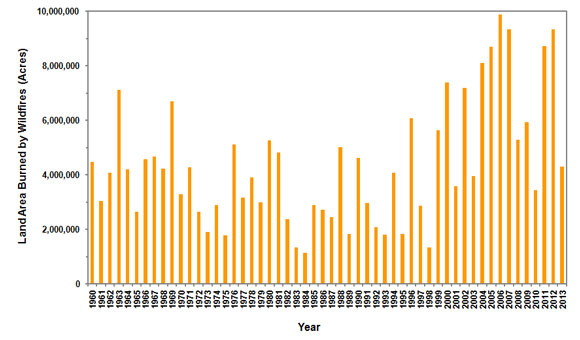 Historical wildfire activity in the United States based on data from the National Interagency Fire Center. Image via Deanna Conners.

Atypical weather patterns across the U.S. may have contributed to the quieter than usual wildfire season in 2013, officials say. Ken Frederick, deputy chief of external affairs at NIFC, told USA Today:

Southern California didn’t get the fire-fanning Santa Ana winds this fall, and Northern California received substantial rain toward the end of summer. These factors, to some degree, resulted in a quiet year in terms of the acres burned and the number of fires.

The nation also did not experience an El Nino or a La Nina climate pattern during 2013 and this may have led to atmospheric circulation patterns that were unfavorable for wildfire activity, according to the news report. Meteorologist Steve Bowen of Aon Benfield noted that July through September was unusually wet for portions of the southwest.

Despite the low amount of wildfire activity, the 2013 wildfire season still managed to take a heavy toll on firefighters. One fire in Arizona tragically killed 19 firefighters as they attempted to battle the blaze.

Bottom line: The amount of land in the U.S. burned by wildfires during 2013 was much lower than the 10-year average, according to preliminary data released from the National Interagency Fire Center (NIFC) in Boise, Idaho on December 27, 2013. Atypical weather patterns leading to substantial rainfall in portions of the western U.S. may have contributed to the low amount of wildfire activity. While the 2013 wildfire season was quieter than usual, it was still one of the most deadly for firefighters.

Wildfires may contribute more to global warming than previously predicted