Were dinosaur nests buried or open?

We know that dinosaurs laid eggs, but did they bury their nests as crocodiles do, or leave them open and exposed, like birds? New research has some answers. 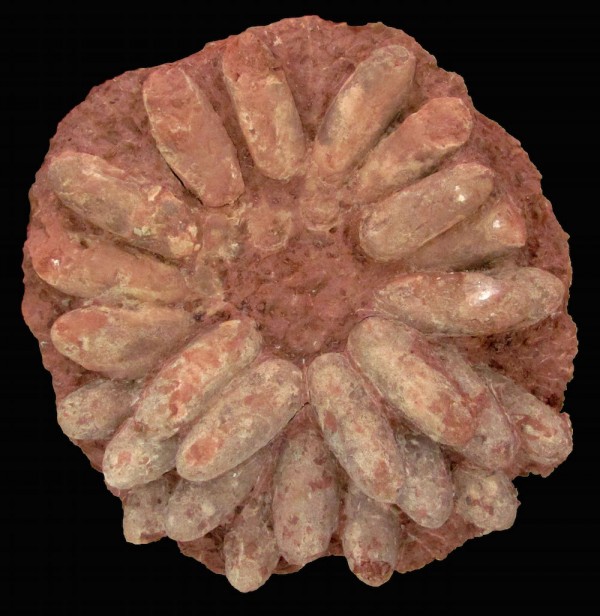 This is the fossilized nest of a birdlike dinosaur from the Late Cretaceous, from China. A University of Calgary team studied fragile dinosaurs nests by examining fossilized dinosaur eggs. Image via Kohei Tanaka.

In 2013, a team at the University of Calgary led by Darla Zelenitsky announced that a small, birdlike North American dinosaur incubated its eggs in a way similar to brooding birds. That research bolstered the evolutionary link between birds and dinosaurs. This week, her team announced recent research on fossilized eggs by one of Zelenitsky’s students, Kohei Tanaka. Most of the dinosaurs he studied appear to have buried their eggs as crocodiles do today. Others built open nests on the ground, like today’s birds. The team concludes that the different nesting styles of dinosaurs may have contributed to the evolutionary success of birds.

The challenge, said Kohei Tanaka, has been that:

Dinosaur nest structures and nesting materials are usually not preserved in the fossil record. In the past, this lack of data has made working with dinosaur eggs and eggshells extremely difficult to determine how dinosaurs built their nests and how the eggs were incubated for hatching young.

These scientists examined tiny pores on eggshell surfaces, and were able to show a link between eggshell porosity and the different nesting types.

Under Zelenitsky’s supervision, Tanaka conducted an in-depth study of the egg porosity of 30 different dinosaur species.

He compared those results with the egg porosity of 120 species of birds and crocodiles, which are the closest living relatives to dinosaurs. 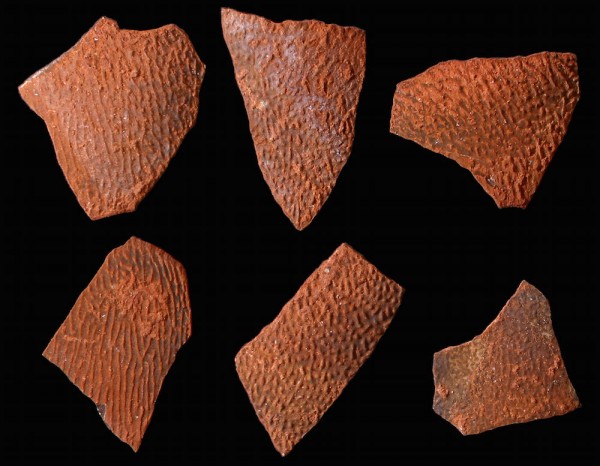 Eggshell fragments from a birdlike dinosaur that lived during the Late Cretaceous of China. Image via Kohei Tanaka.

He found that most of the dinosaur eggs were highly porous, suggesting that they buried their eggs to incubate them. Writing at at the AAAS’s sciencemag.org, Sid Perkins explained why:

In crocodiles’ buried nests, the heat needed to incubate the eggs comes from decomposition of overlying organic matter or the sunlight absorbed by the soil. Plus, in buried nests airflow is somewhat limited, thus requiring eggs to be relatively porous to help increase the flow of oxygen into and carbon dioxide out of the eggs. But birds that brood in open nests can get by laying eggs with fewer or smaller pores.

Perkins also explained that, although most dinosaur eggs were buried, this study suggests that:

… some of the dinosaur species in one group — a subset of well-evolved theropods considered to be the closest relatives of modern-day birds — laid low-porosity eggs, which suggests they incubated their eggs in open nests.

According to a statement from the team:

The study’s results show that most dinosaurs, including the long-necked sauropods, primitive meat-eating theropods and possibly plant-eating ornithischians, produced low porosity eggshells and therefore were highly likely to burry their eggs in nests much like their crocodile predecessors.

Advanced theropods like the maniraptorans, featured high porosity eggshells, suggesting that they laid and incubated their eggs in open nests in the similar fashion as their most closely related living birds.

The researchers concluded that it was probably not until modern-looking birds that open nests with fully exposed eggs came to be, meaning that there was a shift in the type of nest and probably incubation style of dinosaurs during their evolution toward birds. Referring to birds as the most diverse living species with more than 10,000 unique types, Zelenitsky said:

Because buried nests needed to be built and incubated on the ground, open nesting and brooding may have allowed advanced theropods – including birds – to incubate eggs in a greater diversity of locations and occasionally away from ground predators, potentially contributing to their evolutionary success.

With a large amount of data gathered though Tanaka’s diligent work on the eggs of living and fossils animals, we plan to dig even deeper on new questions such as how long it took for dinosaurs to hatch their eggs. 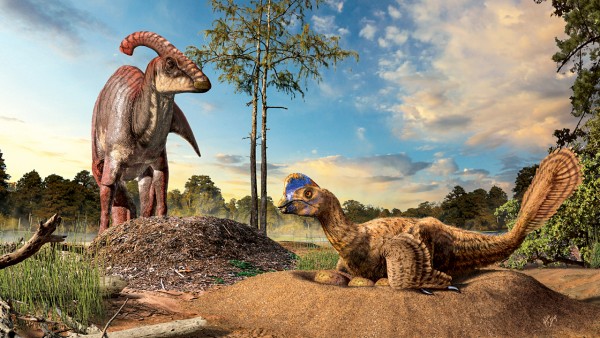 Artist’s concept of a duckbill dinosaur (left) next to its eggs buried in the ground. On the right, a birdlike oviraptorid dinosaur incubates its eggs in an open nest. Illustration by Julius Csotonyi via sciencemag.org

Bottom line: Scientists at the University of Calgary this week announced results of a study of fossilized dinosaur eggs. Measurements of the amount and size of tiny pores on the eggs’ surfaces revealed that most dinosaurs in the study did bury their nests as crocodiles do, but some left them open and exposed, like modern birds.