A global electromagnetic resonance created by the combined lightning storms across our planet.

Scientists now know that waves created by lightning flashes in Earth’s atmosphere leak into outer space in a rhythmic way. Scientists describe these waves as a repeating atmospheric heartbeat known as Schumann resonance. They detected them with an instrument aboard a U.S. Airforce satellite in late 2011. It was thought before this detection that these lightning-made waves stayed caged at a lower altitude.

NASA says that there are about 2,000 thunderstorms rolling over Earth at any given moment, producing some 50 flashes of lightning every second. Each lightning burst creates electromagnetic waves that begin to circle around Earth captured between Earth’s surface and a boundary about 60 miles (100 kilometers) up. If they have just the right wavelength, though, some of the waves combine and increase in strength to create a global electromagnetic resonance: the Schumann resonance. 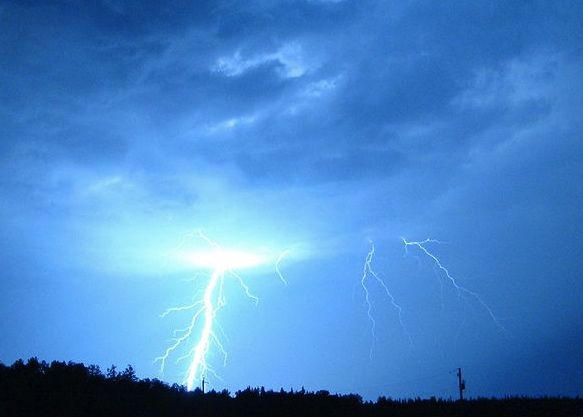 Researchers didn’t expect to observe these resonances in space, but it turns out that energy is leaking out and this opens up many other possibilities to study our planet from above.

Bottom line: An orbiting satellite detected the Schumann resonance from space. It is a global electromagnetic resonance created by the combined lightning storms across our planet.