An ice bridge collapsed at Perito Moreno Glacier in Argentina earlier this month. Hundreds of tourists and locals gathered to witness the dramatic event.

This article is republished with permission from GlacierHub. This post was written by Fei Gao.

On March 9, 2016 huge masses of ice broke up into pieces and fell into Argentino Lake, the largest lake in the country. This is a periodic process that happens every three to four years; the last one happened in 2012.

According to Fox News Latino, the Tourism Secretariat of El Califate said: .

The Perito Moreno Glacier began its breakup process. We’re waiting! (We) came to experience it firsthand!

There is no precise calculation as to when the breakups happen, but based on the history it starts when the glacial outflow begins to occur, during which water constantly flows out through an opening at the bottom of a glacier.

The Perito Moreno ice field generates pressure and forces the glacier to grow toward the southern arm of Lake Argentino, forming a dam. As the amount of water increases within the dam, the flow of water creates a tunnel through the glacier. Gradually the water flow washes out the exterior of the ice wall and creates the famous ice bridge. When the ice bridge can no longer hold the weight of ice above it, the spectacular collapse happens. The bridge structure is believed to have consisted of several thousands tonnes of ice. 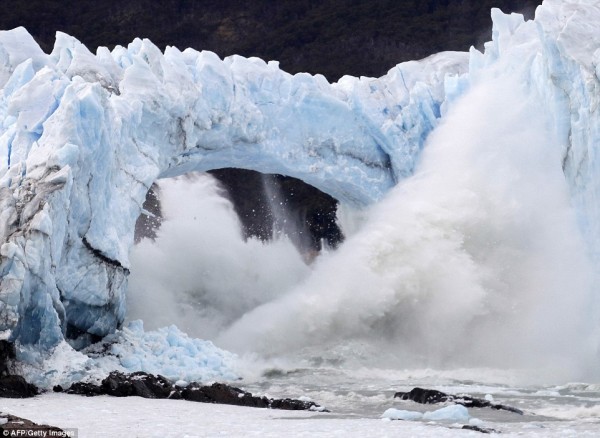 In 2008, the ice fell apart in winter in the Southern Hemisphere for the first time, according to Reuters. There were concerns as to whether global warming had an impact on the collapse. However, experts said the collapse only happened because of natural physical processes and no climate change factor was involved.

In fact, Argentina’s Perito Moreno glacier is one of a few glaciers that are growing in spite of global warming, according to NBC News.

Andres Rivera, a glaciologist with the Center for Scientific Studies in Valdivia, Chile told NBC News:

We’re not sure why this happens. But not all glaciers respond equally to climate change.

The Perito Moreno Glacier, located in the Los Glaciares National Park, is one of the most important tourist sites in Argentina and is the world’s third largest freshwater reservoir as well.

A spokesman for Los Glaciares National Park Matilde Oviedo told The Daily Mail there was a “tremendous noise” when the bridge fell, according to a report. He said:

There were a lot of people but we were expecting it to happen a little later.

Bottom line: Video of ice bridge collapse. On March 9, 2016 huge masses of ice broke up into pieces and fell into Argentino Lake, the largest lake in Argentina.