Ocean hot spots in the Atlantic and Pacific were drivers of the hottest summers on record for the central U.S. in 1934 and 1936, suggest new study. 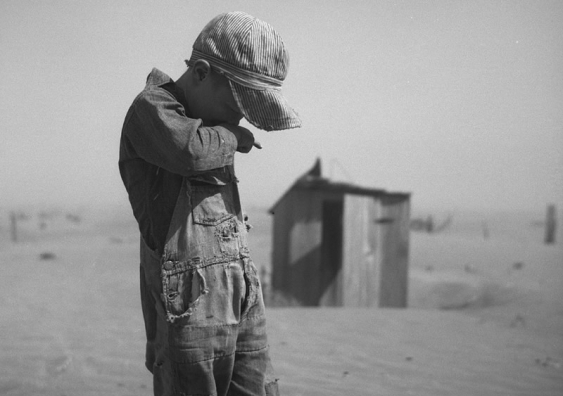 The unusually hot summers of 1934 and 1936 broke heat records for the United States that still stand today. They were part of the devastating Dust Bowl decade of the 1930s, when drought turned unanchored soil to dust, which the prevailing winds blew away in huge clouds that sometimes blackened the sky.

Research by Markus Donat from the ARC Centre of Excellence for Climate System Science and colleagues at the University of New South Wales (UNSW) suggests that unusually warm sea surface temperatures occurring at exactly the same time in two very specific locations were likely responsible for creating the record-breaking heat.

In the Pacific, there were anomalously warm ocean temperatures along the coastline of the Gulf of Alaska stretching down as far as Los Angeles.

On the other side of the country in the Atlantic Ocean, in a relatively small area off the coast of Maine and Nova Scotia, the ocean surface was also unusually warm. Together they reduced spring rainfall and created perfect conditions for scorching hot temperatures to develop in the heart of the US. 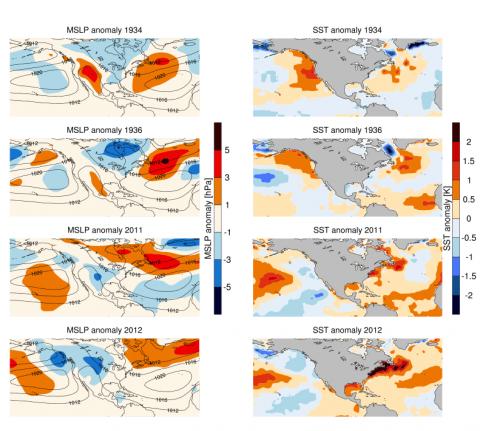 The new research, published in Climate Dynamics in April 2015, may also help modern forecasters predict particularly hot summers over the central United States many months ahead.

As part of their study, the researchers compared the large-scale climate conditions in 1934 and 1936 with those of the extensive recent hot drought years of 2011 and 2012 to see if there were any similarities to the Dust Bowl years.

The large scale ocean conditions in 2011 and 2012 were very different from 1934 and 1936, suggesting an event of a quite different nature.

Only very rarely have we seen these very specific ocean regions warm at the same time over the past century, but those combined warm anomalies were never as strong as during the two record breaking years of 1934 and 1936.

This unusual ocean warming in two regions compounded the impacts on the atmosphere and pressure gradients across the continental U.S., profoundly changing the weather systems during the spring and summers.

The Atlantic warming off Nova Scotia and Maine meant southerly winds shifted further north-east and the transport of moist air from the Gulf of Mexico northward into the central United States was weakened. At the same time, the Pacific Ocean warming expanded a large Pacific high that also contributed to reduced transport of moist air into the central U.S. Donat said:

Not only did the warming amplify summer temperatures, it also reduced spring rainfall.

To make matter worse, past research has shown the atmospheric dust over Western North America once summer was underway had a positive feedback that intensified the high pressure system even further.

The U.S. has been very fortunate that it has not seen a repeat of this coincident ocean warming at such a level. Should this ocean warming reoccur in exactly the same constellation, because of climate change it is likely the temperature impacts would be even more devastating and those old records may be surpassed. 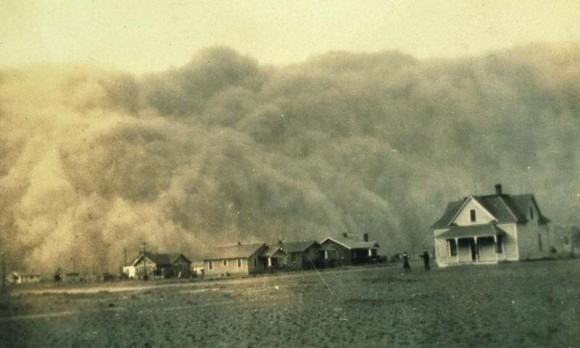 Bottom line: Research from the University of New South Wales suggests that unusually warm sea surface temperatures occurring at exactly the same time in two very specific locations were likely responsible for creating the record-breaking U.S. summer heat of 1934 and 1936.

Read more from the University of New South Wales