The Blob is dead, scientists declare

The giant patch of warm water in the northern Pacific – nicknamed The Blob – has finally broken up. Compare images from this year and last. 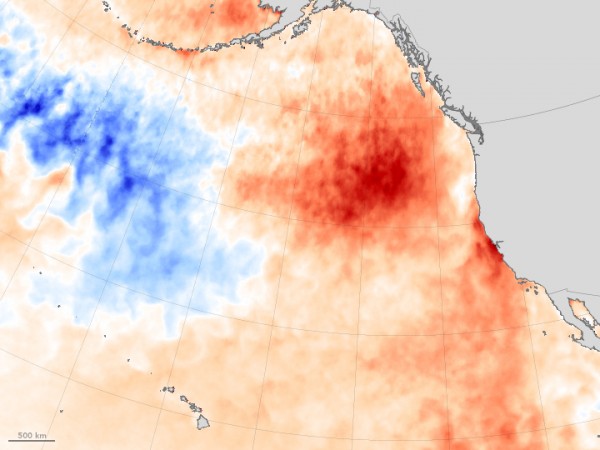 These maps show sea surface temperature anomalies in the Pacific in July 2015 (above) and January 2016 (below). The maps do not depict absolute temperatures; instead, they show how much above (red) or below (blue) water temperatures were compared to the average from 2003 to 2012. 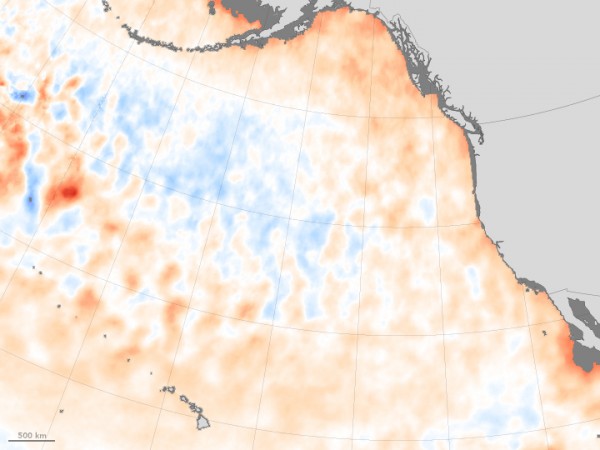 By the end of January, 2016, a giant patch of remarkably warm water in the northeast Pacific off the U.S. west coast, nicknamed The Blob, appears to have dissipated. Its break-up is thanks in part to the strong El Niño in the equatorial Pacific, say scientists.

The so-called blob formed in response to an unusually strong and persistent ridge of atmospheric high pressure that emerged over the northeastern Pacific Ocean in the winter of 2013-14. The feature, which was so unrelenting that meteorologists took to calling it the Ridiculously Resilient Ridge, weakened winds in the area enough that the normal wind-driven churning of the sea eased. Those winds usually promote upwelling, which brings deep, cool water up toward the surface; instead, the resilient ridge shut down the ocean circulation, leaving a large lens of unusually warm surface water in the northeastern Pacific.

Scientists and journalists took to calling the patch of warm water “The Blob.” Nicholas Bond, a University of Washington meteorologist and the Washington state’s climatologist, coined the term. Learn more about The Blob here.

At times, this patch of warm water seeped into the Bering Sea, the Gulf of Alaska, and the coastal waters off Washington, Oregon, and California. In fact, many parts of the northeastern Pacific experienced the greatest sea surface temperature anomalies in the historical record.

As unusually warm surface water sloshed around for months, the consequences began to ricochet through the marine food web. Microscopic phytoplankton thrive in cool waters, so the lack of upwelling water meant surface waters became increasingly starved of nutrients. With fewer phytoplankton, fish and other marine life began to suffer. Certain types of fish started avoiding the region altogether, and by 2015 record numbers of starving sea lions and fur seals were found stranded on California’s beaches. Meanwhile, the warm water also began to produce some strange weather in the western United States.

Thanks in part to the strong El Niño in the equatorial Pacific, the blob has finally broken up. Beginning in November 2015, strong winds blowing south from Alaska began to pick up, and sea surface temperatures in the northeastern Pacific began to cool.

In July 2015, temperatures were unusually warm across a large swath from the Gulf of Alaska to the California coast. By January 2016, more seasonable temperatures had returned. In September 2015, Clifford Mass, a University of Washington atmospheric scientist, explained in his blog that El Niño generally brings lower-than-normal sea surface pressures to the eastern Pacific — the opposite of the systems that sustained the blob. By mid-December 2015, Mass declared that the blob was dead.

There are significant temperature anomalies extending down to a depth of about 300 meters. So while the weather patterns the past few months have not been that favorable to warming, it will take a while for all of the accumulated heat to go away.

That means impacts on marine life and on weather in the Pacific Northwest could linger, though Bond does not think the blob will return in the near term.

Bottom line: The Blob – a giant patch of warm water in the northern Pacific – has finally broken up, thanks in part to a strong El Niño, Images compared the region July 2015 to January, 2016.