Follow the link in this post to vote on your top five favorite images, from 40 years of Landsat satellite history. Beautiful!

USGS and NASA want you to help them select the top five Earth As Art images. TO VOTE, CLICK HERE. The Earth As Art contest is a celebration of the 40th anniversary of the Landsat program, coming up on July 23, 2012. You can vote until July 6, 2012.

Sampling of Landsat images, below. Captions provided by USGS/NASA. 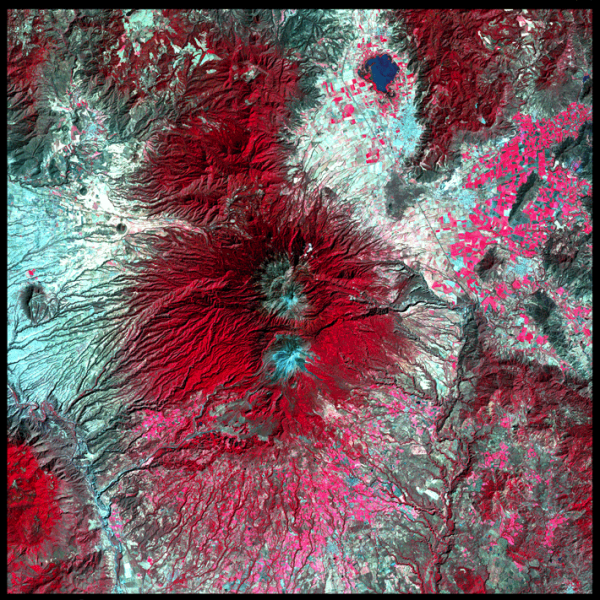 Snow-capped Colima Volcano, the most active volcano in Mexico, rises abruptly from the surrounding landscape in the state of Jalisco. Colima is actually a melding of two volcanoes, the older Nevado de Colima to the north and the younger, historically active Volcan de Colima to the south. Legend has it that gods sit atop the volcano on thrones of fire and ice. 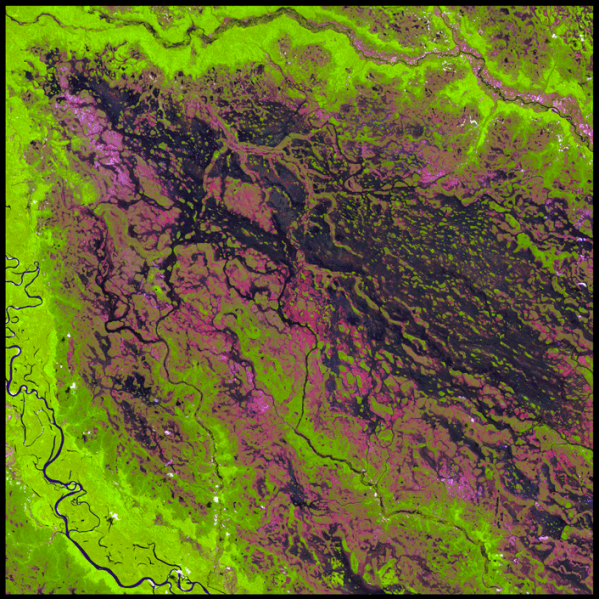 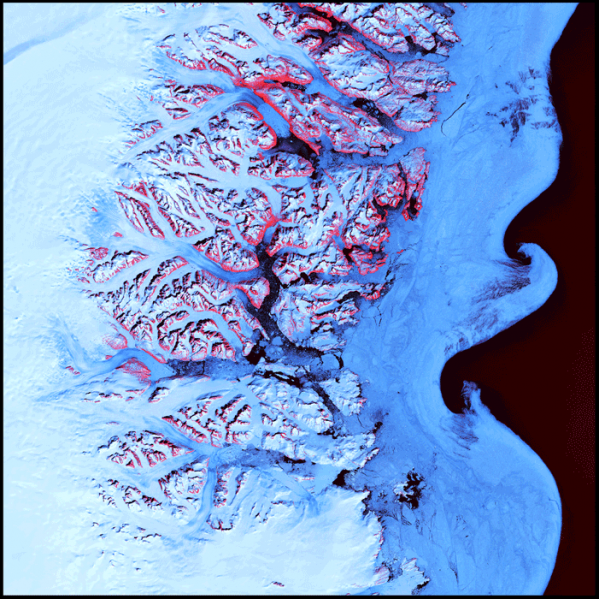 Landsat image of ice waves off the coast of Greenland. Image Credit: USGS/NASA

Along the southeastern coast of Greenland, an intricate network of fjords funnels glacial ice to the Atlantic Ocean. During the summer melting season, newly calved icebergs join slabs of sea ice and older, weathered bergs in an offshore slurry that the southward-flowing East Greenland Current sometimes swirls into stunning shapes. Exposed rock of mountain peaks, tinted red in this image, hints at a hidden landscape. 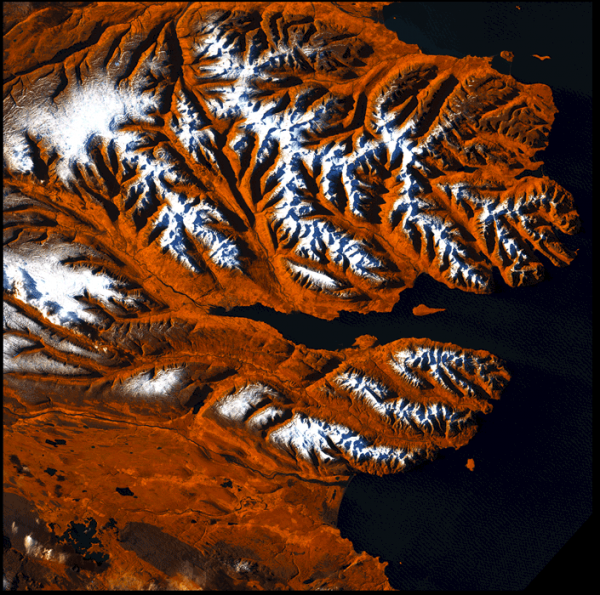 This stretch of Iceland’s northern coast resembles a tiger’s head complete with stripes of orange, black, and white. The tiger’s mouth is the great Eyjafjorour, a deep fjord that juts into the mainland between steep mountains. The name means “island fjord,” derived from the tiny, tear-shaped Hrisey Island near its mouth. The ice-free port city of Akureyri lies near the fjord’s narrow tip, and is Iceland’s second largest population center after the capital, Reykjavik. 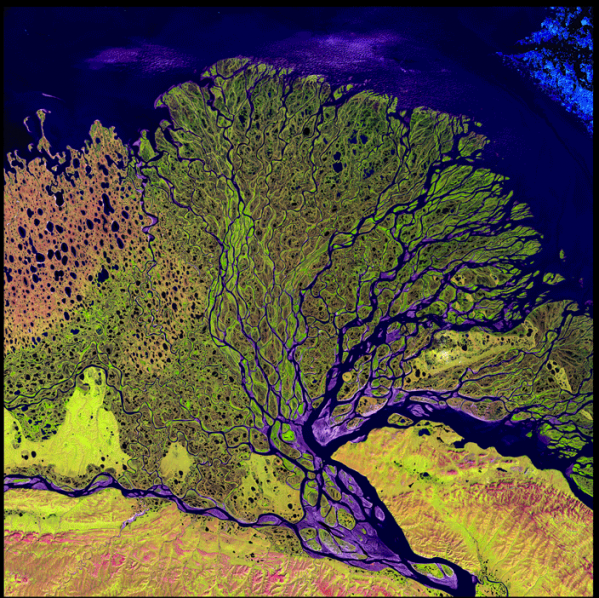 The Lena River, some 2,800 miles(4,500km) long, is one of the largest rivers in the world. The Lena Delta Reserve is the most extensive protected wilderness area in Russia. It is an important refuge and breeding grounds for many species of Siberian wildlife. 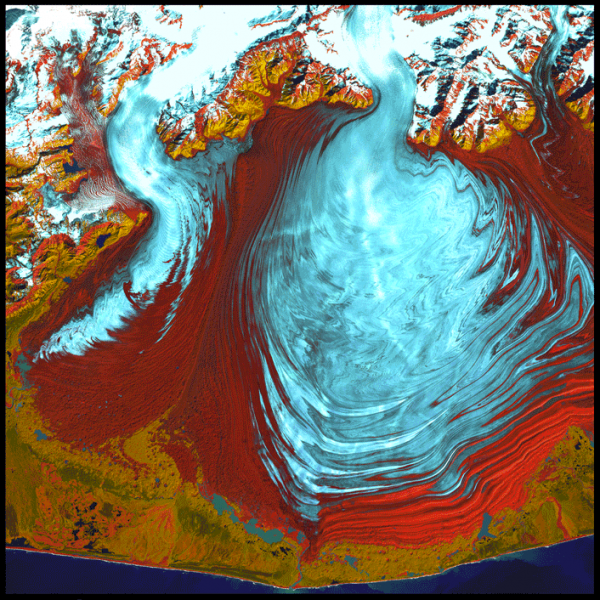 The tongue of the Malaspina Glacier, the largest glacier in Alaska, fills most of this image. The Malaspina lies west of Yakutat Bay and covers 1,500 sq mi (3,880 sq km). 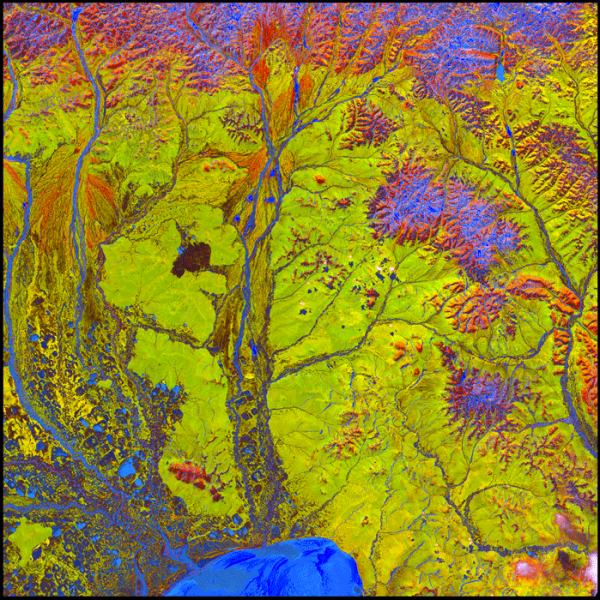 Vivid colors and bizarre shapes come together in an image that could be an imaginative illustration for a fantasy story. This labyrinth of exotic features is present along the edge of Russia’s Chaunskaya Bay (vivid blue half circle) in northeastern Siberia. Two major rivers, the Chaun and Palyavaam, flow into the bay, which in turn opens into the Arctic Ocean. Ribbon lakes and bogs are present throughout the area, created by depressions left by receding glaciers. 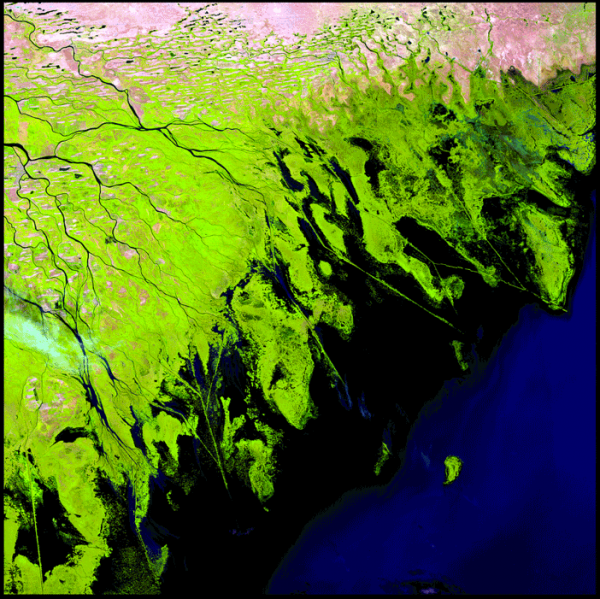 Where the Volga River flows into the Caspian Sea, it creates an extensive delta. The Volga Delta is comprised of more than 500 channels, and sustains the most productive fishing grounds in Eurasia.

For 40 years Landsat satellites have been acquiring images of the land cover of the planet. The satellites have given us spectacular views of mountains, valleys, coastal areas, islands, volcanic fields, forests, and patterns on the landscape. By highlighting some of those features and creatively crafting the colors we have developed a series of Earth as Art perspectives that reveal the artistic side of Landsat. The top five Earth as Art images will be announced on July 23 in Washington, D.C., at a special event commemorating the launch of the first Landsat satellite.

Bottom line: USGS and NASA want you to help them select the top five Earth As Art images. VOTE HERE.

Joni Stewart, Chief Financial Officer and Partner. Joni ensures that deadlines are met, that excellence is the standard, and that fiscal responsibility is upheld in all EarthSky projects and products. Since 2008, she has worked with clients and sponsors, as well as outside accountants and auditors, to implement the most up-to-date and accurate production and financial tracking systems available for our company. She also assists independent financial reviewers, providing the information they need to judge that our systems are sound. In 2016, Joni became part-owner of one of the companies that oversees EarthSky online.