View from space: Watch winter storm move across US

NASA video of satellite imagery shows three days of movement of a massive winter storm that stretches from the southern U.S. to the northeast.

This video shows the progression of a major winter storm in the U.S. south from February 10 at 1815 UTC/1:15 p.m. EST to yesterday (February 12) at 1845 UTC/1:45 p.m. EST. It’s a compilation of satellite images made into a video by NASA/NOAA’s GOES Project at NASA’s Goddard Space Flight Center in Greenbelt, Maryland.

Today, this same storm that brought heavy snows and significant ice accumulations to portions of the Southeast yesterday begins its track up the U.S. Eastern Seaboard.

Here’s a NASA satellite image of the storm yesterday (February 12) at about 2 p.m. EST 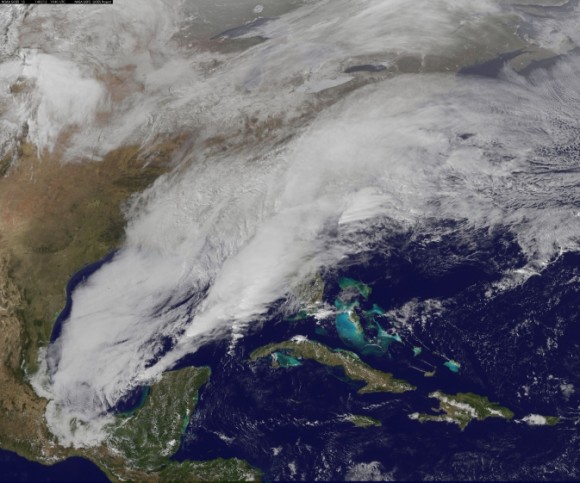 This visible image of the winter storm over the U.S. south and East Coast was taken by NOAA’s GOES-13 satellite on Feb. 12 at 1855 UTC/1:55 p.m. EST. Snow covered ground can be seen over the Great Lakes region and Ohio Valley. Image credit: NASA/NOAA GOES Project

Bottom line: A video compilation of NASA/NOAA satellite images shows the progression of a major winter storm in the U.S. south from February 10 to February 12.