Satellite image of the Summit fire in southern California on May 1, 2013.

NASA’s Terra satellite captured this image showing a wildfire burning near Banning, California yesterday (May 1, 2013). Actively burning areas are outlined in red. An instrument called the Moderate Resolution Imaging Spectroradiometer (MODIS) aboard the satellite detects unusually warm surface temperatures associated with fires. You can see the smoke in the area nearby. 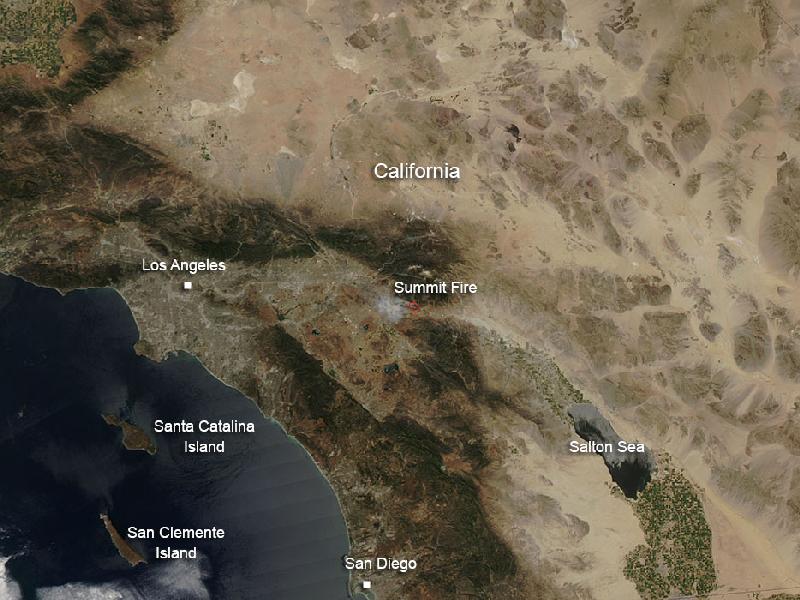 The so-called ‘Summit fire’ is a a fast-moving, wind-driven brush fire in Riverside County, California. It was 40 percent contained as of early this morning (May 2) according to fire officials. The fire broke out around 12:30 p.m. yesterday near North San Gorgonio Road and Summit Drive in Banning. Crews fought the nearly 3,000-acre fire overnight and were aided by diminished winds that allowed them to lay containment lines around the blaze, according to the CBS affiliate in Los Angeles.

Over 400 firefighters have been involved in trying to quell the blaze since it began yesterday and several communities have been evacuated. One home was destroyed by the fire.

Officials warned Wednesday that a relatively dry winter couple with warm summer weather could portend a devastating fire season in Southern California and other areas of the U.S. West.