A satellite view of the Meadowlands in in East Rutherford, New Jersey. It’s the Superbowl’s first northern, cold-weather venue.

In its first 47 years, the Super Bowl has always been played in a warm-weather location or indoors. Miami and New Orleans have each hosted the championship game of American football ten times, and other warm locales have hosted 23 games. Another four games have been played in cities with cold and snowy winter climates—Indianapolis, Minnesota, and Detroit (twice)—but each time the stadium had a dome. 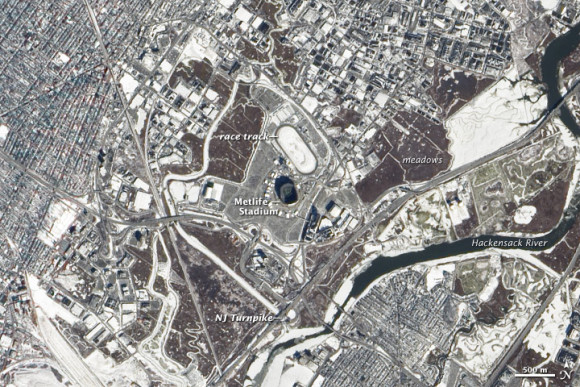 On February 2, 2014, the National Football League will hold its first outdoor Super Bowl at a northern, cold-weather stadium. The Advanced Land Imager on NASA’s Earth Observing-1 satellite acquired this view of Metlife Stadium in East Rutherford, New Jersey, on January 30, 2014.

In the image, the south end of the stadium casts a long winter shadow over the field. Metlife is part of the Meadowlands Sports Complex, which includes the Meadowlands Racetrack (horse racing) and the Izod Center (indoor arena, east of Metlife, along the New Jersey Turnpike). A crust of snow, ice, and salt make the surrounding parking lots appear gray.

Snow has been reported in the area seven times in the past month, including two major snowstorms, according to The Weather Channel’s website. The National Weather Service forecast for February 2 calls for cloudy skies, daytime temperatures near 48° Fahrenheit (9° Celsius), and nighttime temperatures around 28°F (-2° Celsius). There is a 20 to 30 percent chance of rain before the game and of snow after it.