Overall, sea ice extent in the Arctic has been decreasing steadily throughout this past decade. In fact, the six lowest sea ice extents in the satellite record have occurred in the last six years (2007 to 2012).

Unlike 2010, when intense wildfires burned in western Russia, most of the 2012 fires have burned in remote parts of eastern and central Siberia.

According to NASA, summer of 2012 has been “the most severe wildfire season Russia has faced in a decade.” By July 2012, more land in Russia had already burned than in the whole summer of 2010, when intense wildfires affected western Russia. Unlike 2010, most of the 2012 fires have burned in remote parts of eastern and central Siberia. NASA said:

More than 17,000 wildfires had burned more than 30 million hectares (74 million acres) through August 2012, according to researchers at the Sukachev Institute of Forest in the Russian Academy of Sciences. In comparison, 20 million hectares burned last year, which was roughly the average between 2000 and 2008, according to an analysis of … data published in 2010. 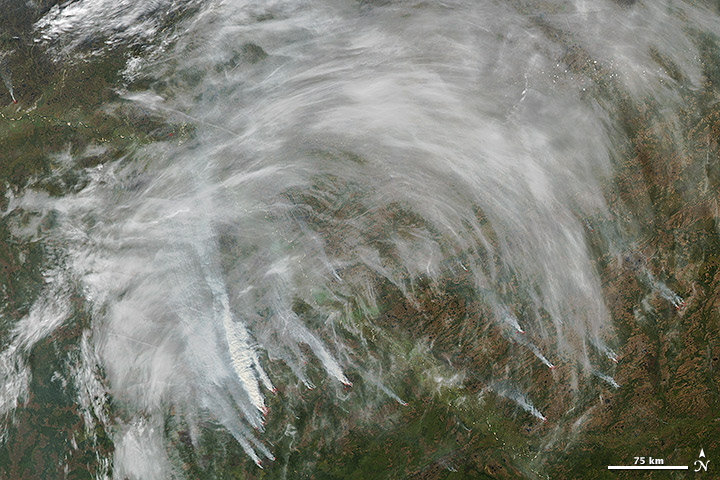 The image above is from NASA Aqua satellite on September 11, 2012. These fires are burning in Tomsk, a region of south central Siberia. NASA said:

Thick smoke billowed from numerous wildfires near the Ob River and mixed with haze and clouds that arrived from the southwest.

Read more from NASA about this image.