Same iceberg we heard about in July 2012 – twice the size of Manhattan. Satellite observations show the main iceberg and two smaller fragments drifting.

NASA has released a new image from space of a massive iceberg – widely heralded in July 2012 to be twice the size of Manhattan – calved from Greenland’s Petermann Glacier in mid-July 2012. NASA’s Terra satellite saw it in September 2012, drifting slowly away from the glacier. It’s drifting in the Nares Strait between Canada’s Ellesmere Island and Greenland. 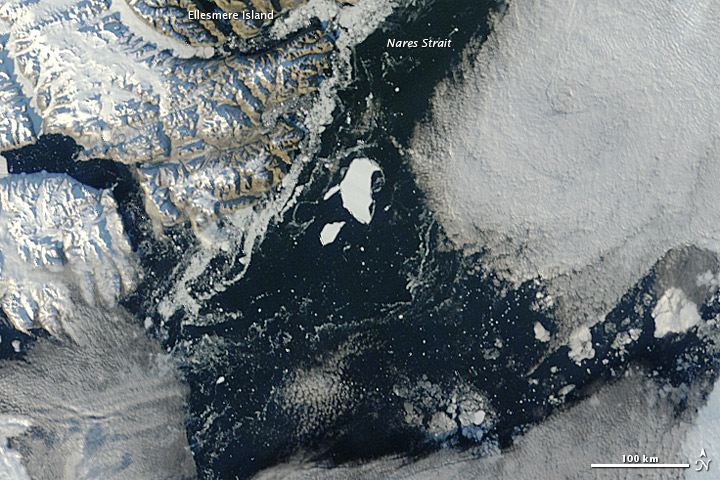 A massive iceberg calved off the Petermann Glacier of northwestern Greenland has begun to drift this month. Here it is, visible with two smaller fragments also drifting, as seen by NASA’s Terra satellite on September 13, 2012. Make larger.

Scientists have labeled this iceberg as PII-2012. Satellite observations showed it was still intact on August 31, but that, by September 4, it has started to fragment away from the main glacier. Now you can see the main iceberg and two smaller fragments drifting through Nares Strait.

Nares Strait, as indicated by rectangle above, is between northwestern Greenland (beige on this map) and Canada’s Ellesmere Island.

The iceberg originally calved from the glacier’s floating ice tongue on July 16, 2012. The estimated area of the main iceberg – which you could think of as a new island of ice – is approximately 130 km2.

Ice islands from the Petermann Glacier are known to drift southwards periodically into Baffin Bay. They can move down the Labrador coast, sometimes reaching Newfoundland, where they pose a hazard to shipping and navigation.

More geography. The island in red is Ellesmere Island. The grey land mass to its north is Greenland. Map via Wikimedia Commons.

Bottom line: A massive iceberg – labeled PII-2012 by scientists and said to be “twice the size of Manhattan” – has broken away from the Petermann Glacier in northernwestern Greenland and is now drifting in the Nares Strait between Greenland and Canada’s Ellesmere Island.

Read more about this story from NASA’s Earth Observatory

Read more about the original calving event from Environment Canada