View from space: Greeley, Colorado before and after the flood

On September 20, Colorado’s Office of Emergency Management reported the floods had impacted 17 counties, leaving 7 dead with 104 missing and more than 16,000 damaged homes.

NASA’s Earth Observatory posted these photos of the town of Greeley, which is in northern Colorado, taken from space before and after the great Colorado floods of September 2013. These floods began on September 9, 2013, when a slow-moving cold front stalled over Colorado. It clashed with warm, humid air from the south, which people in Colorado call their “monsoon.” The result was heavy rain and flooding along Colorado’s Front Range. Ultimately, the flood waters spread across a range of almost 200 miles (about 300 km) from north to south – Colorado Springs north to Fort Collins – affecting 17 counties. In Greeley, the South Platte River was receding when Landsat 8 acquired the photo below on September 17, 2013. For contrast, see an earlier photo below that, from June 29. 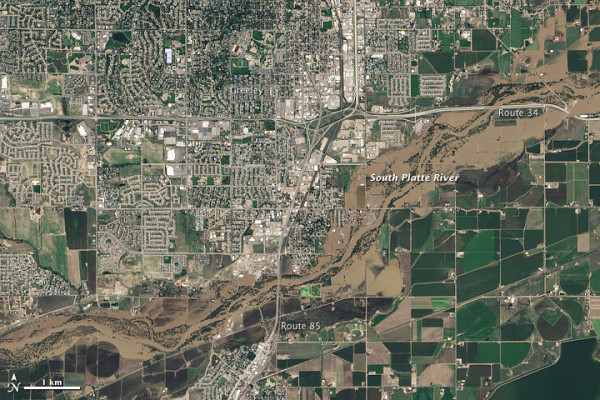 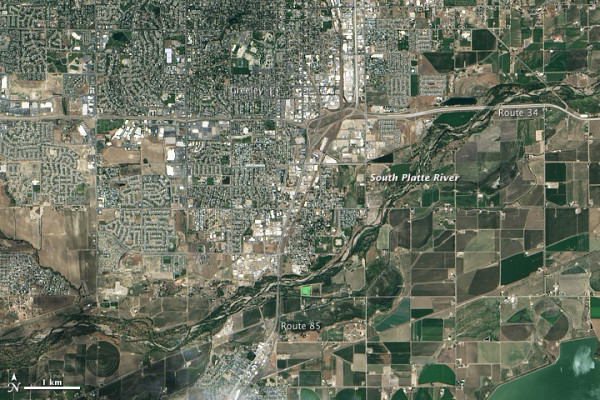 Though water levels on the South Platte River near Greeley, Colorado, are receding, muddy brown floods still spread along the river’s path on September 17, 2013, when the Operational Land Imager (OLI) on the Landsat 8 satellite acquired this image. At the time, the river was more than six feet above flood stage, down from more than eight feet above flood stage.

The image shows that the flood has washed away roads, including sections of U.S. Highway 34. Farmland and a few built up areas are under water. Heavy rain caused flooding across the Front Range of the Rocky Mountains starting on September 11, and much of that water made its way in to the South Platte River. The river reached a record 18.79 feet in the early morning hours of September 14. The previous record crest was 11.73 feet. Flood stage is 10 feet. As the water subsides in Colorado, it is expected to swell the river downstream in Nebraska. 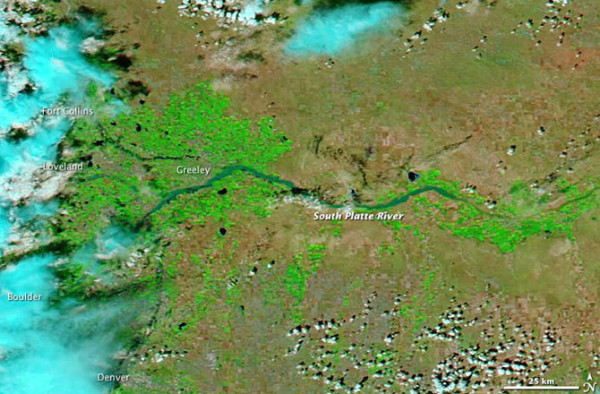 NASA’s Aqua satellite was able to acquire this image of Greeley and the South Platte River on September 14, 2913, when the clouds broke. Image via NASA.

Greeley is in northern Colorado, but the flooding occurred along the entire front range of the Rockies. Interstate 25 was closed in both directions for a time, shocking news to many in the U.S. West who use this road.

Bottom line: Images of the town of Greeley, in northern Colorado, before and after the September 2013 floods. On September 20, Colorado’s Office of Emergency Management reported the floods had impacted 17 counties, leaving 7 dead with 104 missing and more than 16,000 damaged homes.