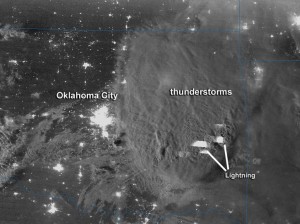 From its orbit around the Earth, the Visible Infrared Imaging Radiometer Suite (VIIRS) aboard NASA-NOAA’s Suomi NPP satellite captured a night-time image of the same storm system that generated the F-4 tornado in Moore, Oklahoma on May 20, 2013.
The side lighting from the moon showed towering overshooting tops of the storm, along with the gravity waves associated with the intense convection. In addition, the day night band (DNB), which sensitive to low light levels at night, can see features which are illuminated by the moon as well as emissive light sources, such as city lights and fires. In addition, the Day-Night-Band or DNB can detect lighting from the storm tops, which appear as the rectangular shapes in the image. This streaking is a result of the time it takes the sensor to scan compared to the short intense lighting flash.
Image Credit: William Straka III, University of Wisconsin,CIMSSData Credit: University of WisconsinText Credit: Rob Gutro, NASA’s Goddard Space Flight Center

Thank you! Your submission has been received!
Oops! Something went wrong while submitting the form.
END_OF_DOCUMENT_TOKEN_TO_BE_REPLACED