Four images from space, from NASA and NOAA satellites, of the Moore, Oklahoma tornado on May 20, 2013.

On May 20, 2013, NASA and NOAA satellites were routinely monitoring the weather system that generated severe weather in the south-central United States and spawned the devastating Moore, Oklahoma tornado. This post contains four images from that routine monitoring from space. The first image below – from NASA’s Aqua satellite – captured a visible image of the storm. NASA says this image provided a detailed look at the supercell thunderstorm that spawned the tornado. 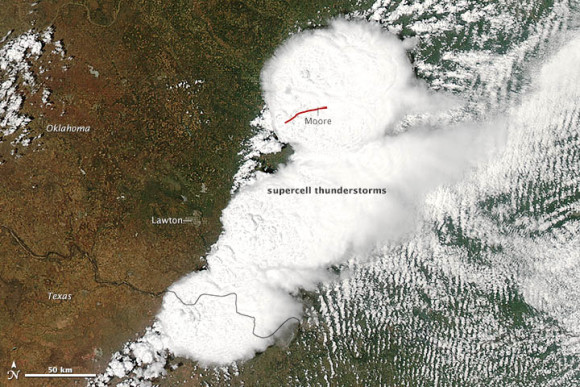 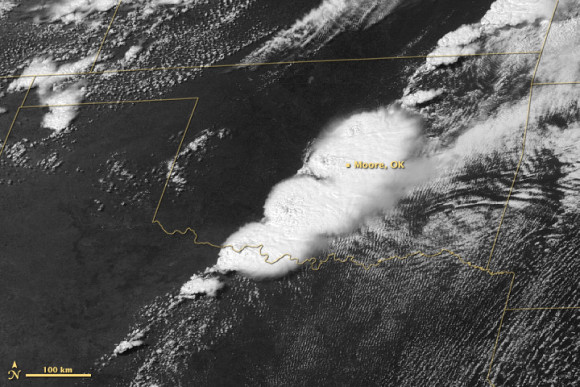 Meanwhile, NOAA’s GOES-13 satellite acquired the image above in the course of doing what it always does – providing continuously updated satellite imagery depicting the movement of weather systems across the U.S. Look here for a downloadable animation that runs from 10:45 a.m. through 6:45 p.m., Central Daylight Time. 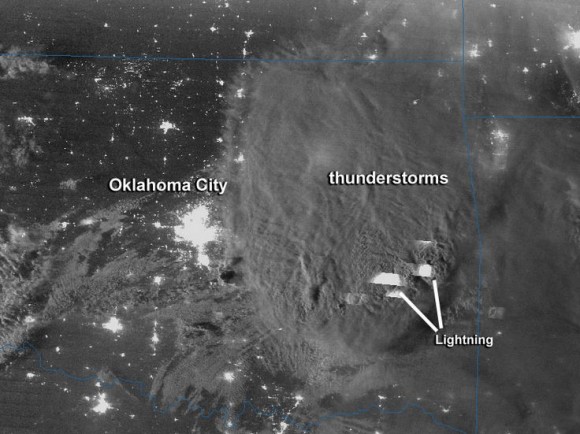 The side lighting from the moon showed towering overshooting tops of the storm, along with the gravity waves associated with the intense convection. In addition, the day night band (DNB), which sensitive to low light levels at night, can see features which are illuminated by the moon as well as emissive light sources, such as city lights and fires. In addition, the Day-Night-Band or DNB can detect lighting from the storm tops, which appear as the rectangular shapes in the image. This streaking is a result of the time it takes the sensor to scan compared to the short intense lighting flash. 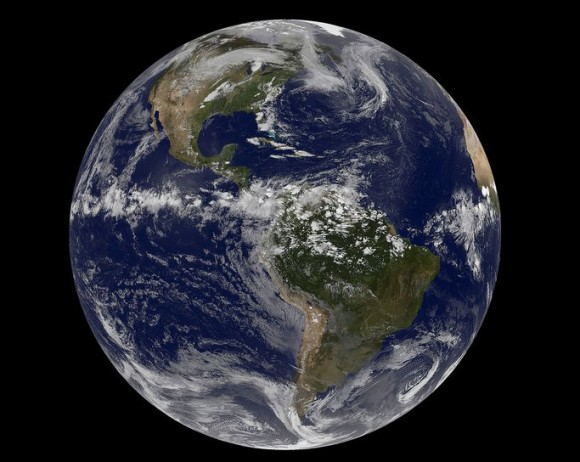 And finally here’s an image of the whole Earth, above. It’s from NOAA’s GOES-13 satellite and shows the weather systems across the entire planet at the time of the devastating storm. The image is from at 20:45 UTC (2:45 p.m. CDT or 1945 UTC) on May 20. It shows the storm system in the south-central U.S. that generated Moore, Oklahoma tornado. The Moore twister was an F-4 tornado (winds between 166 and 200 mph) that touched down around 2:52 p.m. CDT and dissipated around 3:36 p.m. CDT.

See more space images of the May 20 severe storms in the south-central U.S. on this NASA Flickr page

Bottom line: Four images from space, from NASA and NOAA satellites, of the Moore, Oklahoma tornado on May 20, 2013.