View from space: Fires in US Pacific Northwest 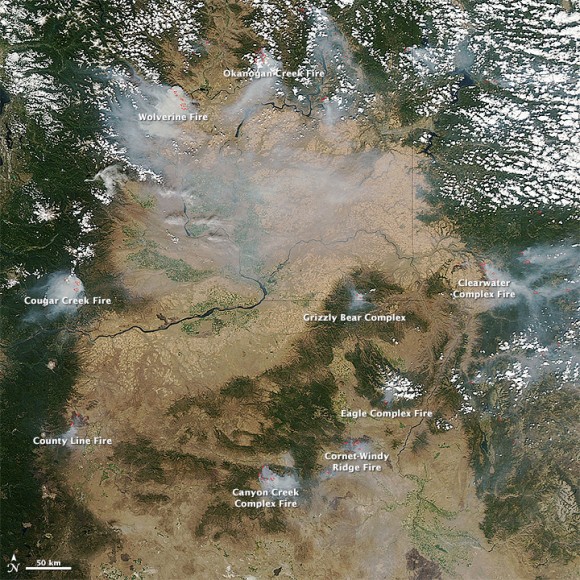 NASA’s Aqua satellite collected the image above of several fires burning in Idaho, Oregon, and Washington on August 16, 2015. Red outlines indicate hot spots where the sensor detected unusually warm surface temperatures generally associated with fires. Thick plumes of smoke drifted from the hot spots. The image below shows the same fires on August 13. 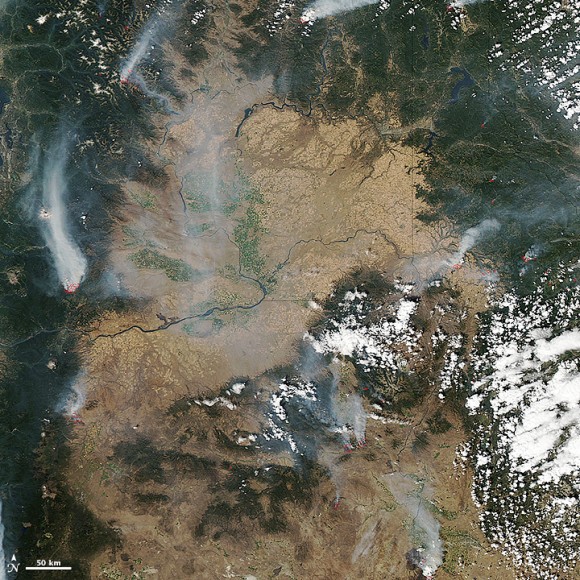 As of August 17, 2105 outbreaks of large wildfires in the western United States had charred nearly 7 million acres, nearly two million more than the ten-year average through mid-August.

While 73 percent of the burned area is the result of massive fires in remote forests in Alaska, large blazes have emerged in the Pacific Northwest as well.

Two of the most destructive blazes, the Canyon Creek Complex and Cornet–Windy Ridge fire had burned about 136,000 acres (55,000 hectares, or 200 square miles) and destroyed 47 structures as of August 17.

Many of the fires were triggered by lightning strikes, but years of drought have parched forests in the West and primed them to burn. A recently published analysis of 35 years of meteorological data found that many parts of the West face longer wildfire seasons than they did a few decades ago, likely because of climate change.

Bottom line: As of August 17, 2017 wildfire outbreaks in the western United States have charred nearly 7 million acres this summer, 2 million more than the 10-year average through mid-August. Satellite view of several fires burning in Idaho, Oregon, and Washington.