View from space: Burn scar from fire in Colorado Springs

The fire is 90% contained, but 776 firefighters are still there, on patrol or waiting to be reassigned. They see smoke from the wildfires now burning in Wyoming.

NASA has released an image of the burn scar from the Waldo Canyon Fire, which began on June 23, 2012 and became the most destructive fire in the history of the state of Colorado, destroying 346 homes in the city of Colorado Springs. InciWeb is reporting today (July 6, 2012) that the fire is 90% contained, but 776 firefighters are still in the area, on mop up and patrol or waiting for reassignment to other parts of the country. They remain on three-minute readiness to respond in the event of flareups. Those fire personnel are reporting that they can see smoke in Colorado Springs from the wildfires now burning in Wyoming. 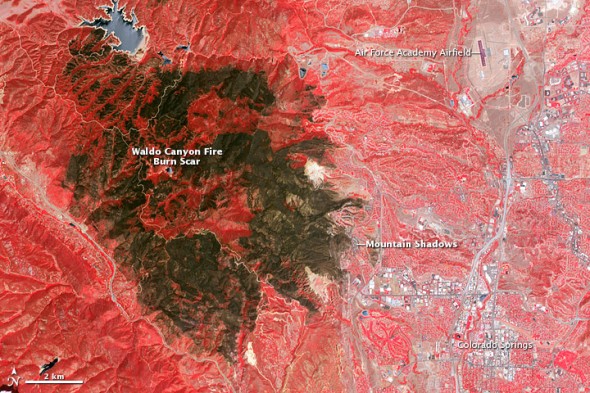 In this satellite image, vegetation-covered land is red. Patches of unburned forest are bright red, in contrast with areas where flecks of light brown indicate some burning. The darkest brown areas are the most severely burned. Buildings, roads, and other developed areas appear light gray and white. The bright red patches of vegetation near Colorado Springs are golf courses, parks, or other irrigated land.

According to an analysis conducted by the Denver Post, the combined value of the homes that burned to the ground in the neighborhood was at least $110 million.

Read more from NASA about this image