Video: The deer that thinks it’s a sheep

You will love this video. The deer attached himself to the sheep in early December 2012. He shows no sign of leaving.

On January 16, 2013, a British conservation group called the National Trust posted a video on YouTube showing a young red deer that has joined a flock of sheep.

National Trust shepherd Andrew Capell discovered the deer while counting his flock at Dunwich Heath in Suffolk recently. The deer and its flock of sheep are grazing on National Trust land. The little deer apparently was separated from his herd before attaching himself to the first group of animals he came across. That was in early December 2012, and the deer has been living, eating and sleeping with his 100 new friends since then and shows no sign of leaving. The sheep do not seem to mind their new guest and have adopted him into the flock.

The National Trust says it hopes the young deer will rejoin his herd if they roam past the flock over the coming weeks. 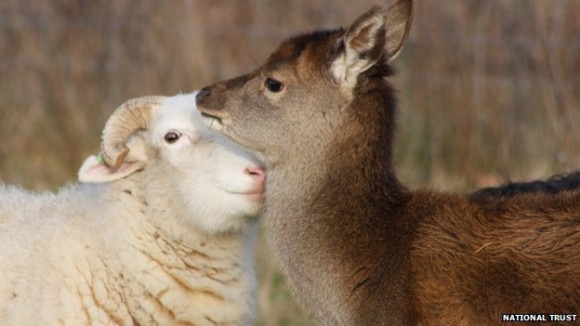 Bottom line: A video shows a young deer living with a herd of sheep on National Trust land in the U.K. Sweet.