Watch this astounding video of an historic breakup of the Ilulissat Glacier in Greenland in 2008.

This video – posted to YouTube on December 14, 2012 – captures an historic calving event from the Ilulissat Glacier, also known as the Jakobshavn Glacier, in western Greenland in 2008. The calving event lasted for 75 minutes, during which time the glacier retreated a full mile across a calving face three miles (five kilometers) wide. Adam LeWinter and Jeff Orlowski captured this footage, which is featured in the newly released film Chasing Ice, which is in theaters now. We recommend full-screen viewing. Expletive alert at about 00:40.

How can we understand the scale of this event, which the film producers said is the largest glacier calving event ever to be witnessed firsthand? They say it is as though the entire lower tip of Manhattan Island broke off, although the glacial ice is several times higher than New York’s cityscape.

Scientists know a lot about the calving of the Ilulissat (Jakobshavn) Glacier. You can read about what they know, and how they know it, in this NASA Earth Observatory article called Greenland’s Ice Island Alarm. Some illustrations from that article are below. 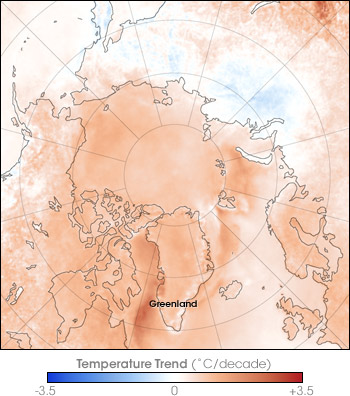 Temperatures in the Arctic have been rising several degrees Celsius per decade (red areas) since 1981. Among the most fundamental questions about Arctic climate change is how the warming will affect the Greenland ice sheet. NASA Map by Robert Simmon, based on data from Josefino Comiso, GSFC, via NASA Earth Observatory. 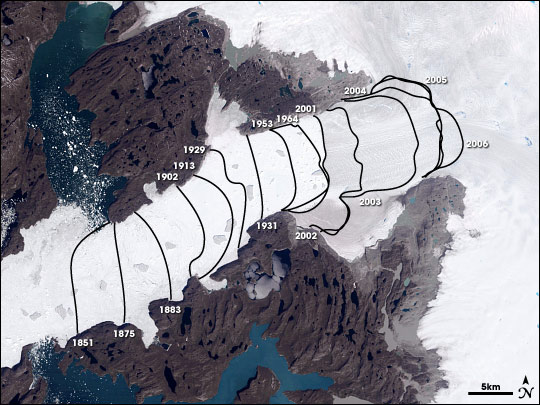 The Jakobshavn Glacier in western Greenland drains the central ice sheet, and it is retreating inland faster than any other. This image shows the glacier in 2001, with scientists’ the historic and subsequent retreat of the glacier indicated. The glacier flows from upper right to lower left. NASA map by Robert Simmon and Marit Jentoft-Nilsen, based on data from Marco Tedesco, GSFC, via NASA Earth Observatory.

Scientists say the Greenland ice sheet could contribute around 4 centimeters to sea level rise by the year 2100, about 10 percent of the total predicted rise. This estimate could be too low, however, since it doesn’t account for rapid, large-scale ice loss through processes such as the accelerated flow of glaciers into the sea. Graph by Robert Simmon, based on data from Johannes Oerlemans, Universiteit Utrecht, via NASA Earth Observatory.

Bottom line: Adam LeWinter and Jeff Orlowski captured footage of a massive 2008 calving event from Ilulissat Glacier, also known as the Jakobshavn Glacier, in western Greenland. The footage is featured in the newly released film Chasing Ice, in theaters now. They say it’s the largest glacier calving event ever caught on film.

Chasing Ice is in theaters now.