When the Taipei Zoo’s newest resident – a one-month old giant panda nicknamed Yuan Zai – was born a month ago, zookeepers had to separate the panda cub from her mother, Yuan Yuan, to be raised in an incubator. The panda cub needed care and round-the-clock monitoring after she was slightly injured a few days after birth. This video shows what happened when mother and daughter were reunited. It’ll warm your heart.

Zookeepers had been taking special care with Yuan Zai because the conception was so difficult, requiring artificial insemination, and because, when panda cubs are born, they’re highly susceptible to disease and smothering by their much larger mothers. 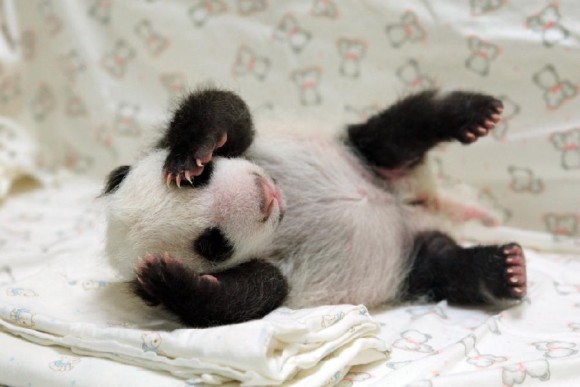 Photo taken on Aug. 8, 2013 shows a giant panda cub nicknamed “Yuan Zai” at the Taipei Zoo in Taipei, southeast China’s Taiwan. The cub, born on July 6, is the first baby of a pair of giant pandas, namely “Tuan Tuan” and “Yuan Yuan”, who were given as a goodwill gift to Taiwan by the Chinese mainland. Image and caption via Xinhua/Taipei Zoo.