“I have conducted expeditions all over the world, but never have I seen such beautiful, pristine forests so untouched by humans.” – Dr. Leeanne Alonso

A first-time survey, conducted in parts of the pristine mountain rainforest of southeastern Suriname, South America, has uncovered a rich biodiversity in flora and fauna, including 60 species that could be new to science and a few species that may exist nowhere else on Earth. A 16-member international team of field biologists published the results of their 2012 survey Results online in October 2013 at the Conservation International website. Their findings highlight the importance of largely untouched tracts of mountain rainforest in providing a good water supply for people living downstream in more populated areas, which is essential for maintaining a viable economy.

Scientists documented an impressively large number of species: 1,378 plants, ants, beetles, katydids grasshoppers, fish, amphibians, birds, and mammals. Look at the bottom of this post to view photos of just a few of these creatures.

About 60 of the documented species may be new to science. Among them is a very small red dung beetle with antler-like antennae enabling a sensitive sense of smell, an elegant chocolate-colored tree-dwelling frog, and a new fish species that closely resembles the head-and-tail-light tetra that’s familiar to most freshwater aquarium enthusiasts. 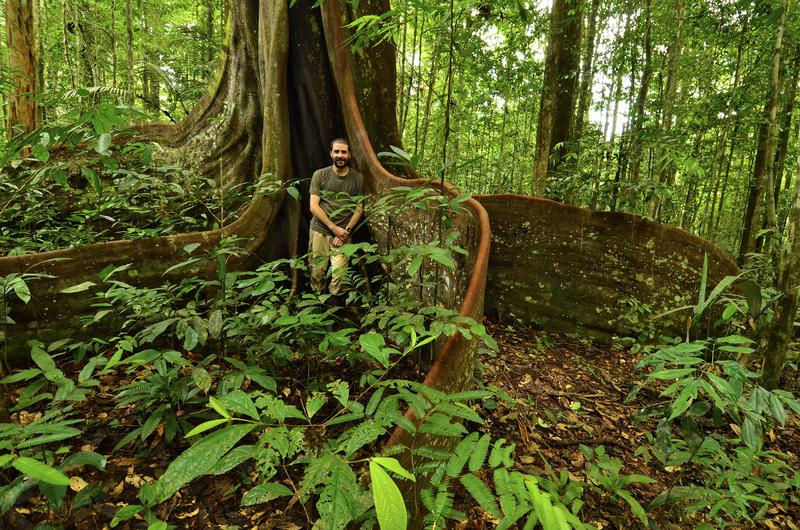 The purpleheart tree has one of the densest hardwood in the world. It has exceptionally large roots for support during violent storms and flood. In the photo is Trond Larsen of Conservation International. Image credit: Trond Larsen.

I have conducted expeditions all over the world, but never have I seen such beautiful, pristine forests so untouched by humans. Southern Suriname is one of the last places on earth where there is a large expanse of pristine tropical forest. The high number of new species discovered is evidence of the amazing biodiversity of these forests that we have only just begun to uncover.

Canoeing through a flooded florest in southeastern Suriname. 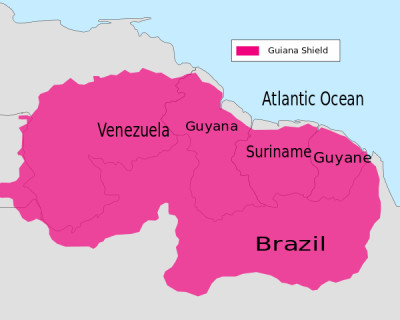 More than 25% of the world’s rainforest is found in the Guiana Shield. Image credit: Lithium57 via Wikimedia Commons.

The regions studied by the scientists are located in what’s known as the Guiana shield, an area overlapping five countries that contains over 25% of the world’s rainforest. It is one of the most biodiverse regions on Earth. In Suriname, where about 95% of the country is still covered in forest, there is increasing pressure to use these forests for mining, dam construction, and building roads. Conservation International has been helping the Suriname government scientifically evaluate its natural resources, enabling the government to make sustainable choices in future economic development.

Southeastern Suriname’s mountain forests have numerous streams that are headwaters for the largest rivers in the country. These rivers are essential to the needs of about 50,000 people living in surrounding areas, providing drinking water, food, sanitation, and transportation. Further downstream, the rivers are needed for energy production and agriculture. The researchers noted that while other segments of Suriname are likely to become drier due to climate change, the southeast mountain forests could be more resilient, becoming an important resource in the future. 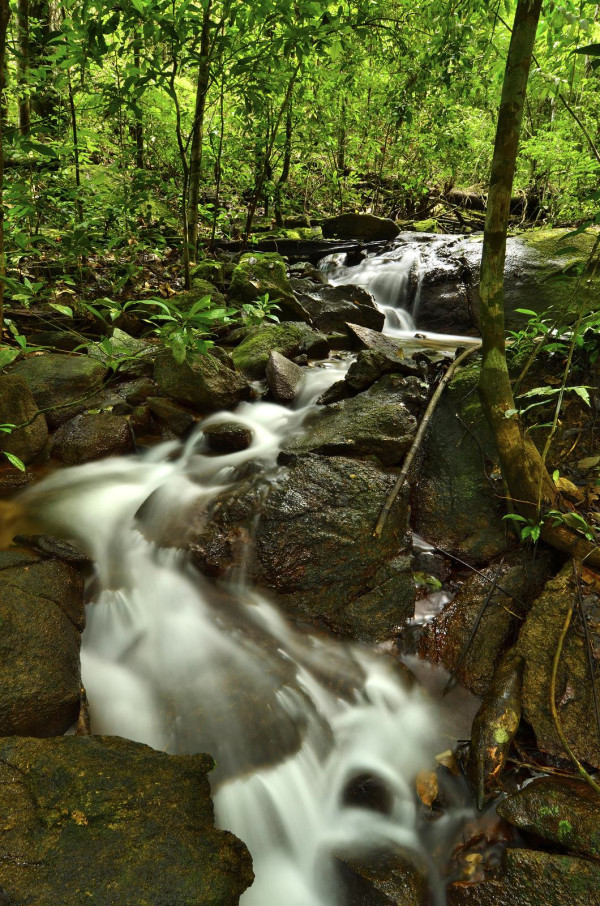 A waterfall near the base of Kasikasima Mountain. The many streams and rivers in southeastern Suriname support a rich diversity of species on land and in the water. Image credit: Trond Larsen.

Suriname’s dense forests, low deforestation and spectacular rivers place us in a truly unique position to become a global model of sustainable development. We can be water exporters in a world increasingly suffering from droughts and water scarcity, but if we deplete and pollute these biological treasures, our country and the rest of the world will have one less major water resource. In a planet on track to surpass nine billion people by mid-century, we are going to need every drop of fresh water we can get.

Bottom line: In a 2012 survey in parts of the southeastern Suriname rainforests, led by Conservation International, scientists have documented a very rich biodiversity of plants and animals. Among the 1,378 species cataloged, about 60 could be new to science. This largely untouched forest has streams that feed into major rivers in Suriname, making it a vital economic resource to the country. Conservation International released these results in October, 2013. 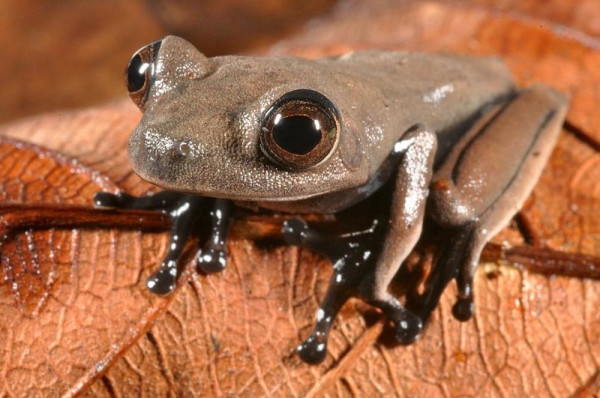 The “cocoa frog” could be a new species. This slender tree-dweller uses round disks on its digits to skillfully move about in the treetops. Said expedition member Trond Larsen, in the press release, “Like other amphibians, its semi-permeable skin makes it highly sensitive to changes in the environment, especially freshwater. With over 100 species of frogs likely gone extinct over just the last three decades, the discovery of this new species is especially heartening.”
Image credit: Stuart V Nielsen. 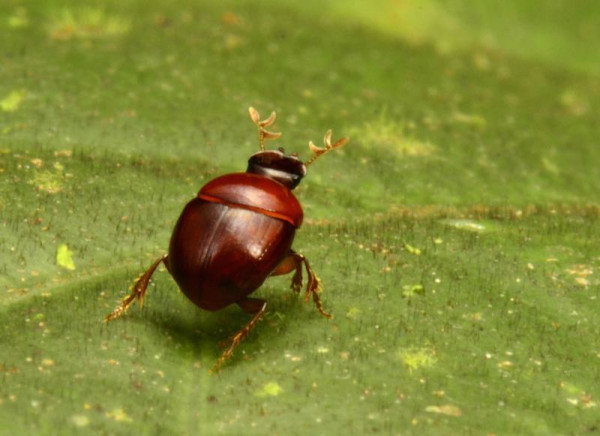 The diminutive “lilliputian beetle,” just under a tenth of an inch in length, is a newly-discovered species of dung beetle. This tiny ruby red insect has antler-like antennae that provide it with a strong sense of smell. Dung beetles play an important role in the forest ecology; by burying dung in the ground, they remove parasites from the ground surface, bury seed that may in the dung for future germination, and provide nutrients for plants. Image credit: Trond Larsen. 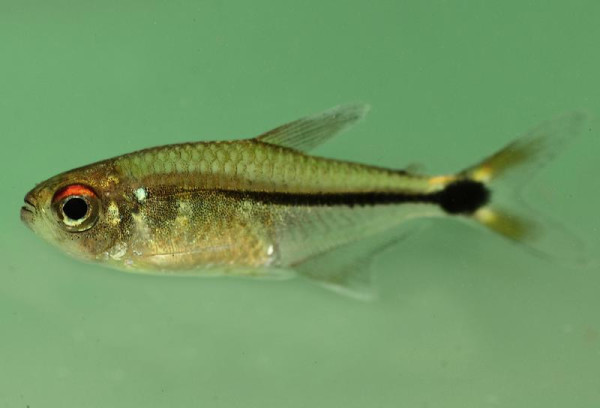 A possible new species, this fish resembles the head-and-tail-light tetras well known to freshwater aquarium hobbyists. It is among the eleven new species of fish discovered during the expedition. Scientists found a large and diverse population of fish during their survey, including big fish that are an important source of food for people. The upper watersheds of southeast Suriname, they think, may also be spawning sites for important migratory fish species. Image credit: Trond Larsen. 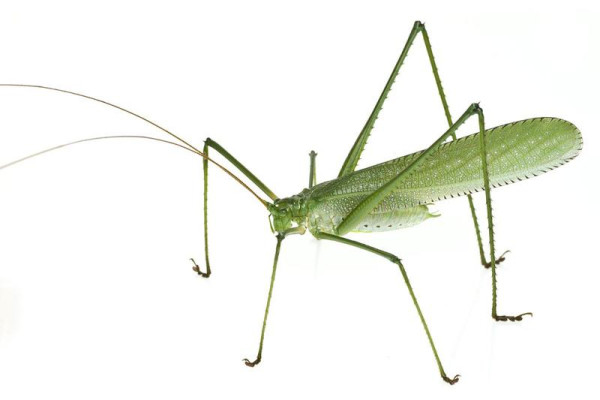 This katydid species, a type of grasshopper could also be a new species. It has unusually long legs with sharp spines for defense against predators. Image credit: Piotr Naskrecki. 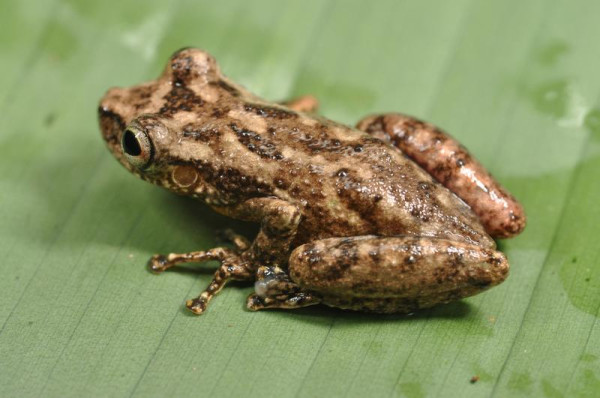 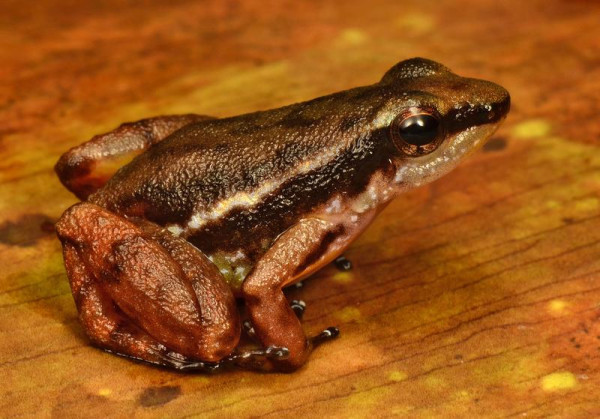 Based on the unusual colors of its top back, scientists think this may be a new poison dart frog species. Poison dart frogs secrete a poisonous substance. As their name implies, the frog’s poison is applied to the tips of blowdarts used for hunting by some indigenous people in Central and South America. Chemicals found in the poison have also been used to develop new medications. Image credit: Trond Larsen. 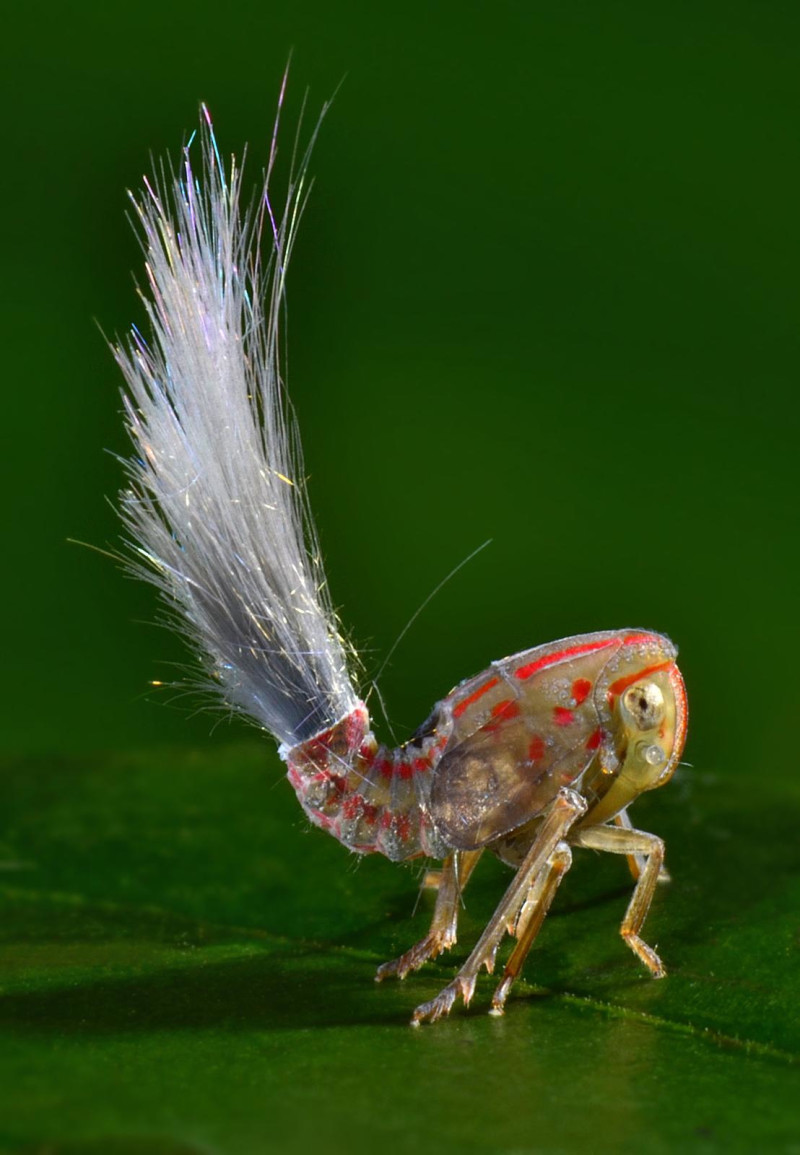 Planthoppers secrete a waxy substance from its abdomen, sometimes forming long strands that may help protect it from predators. This juvenile planthopper measures just two tenths of an inch. Image credit: Trond Larsen. 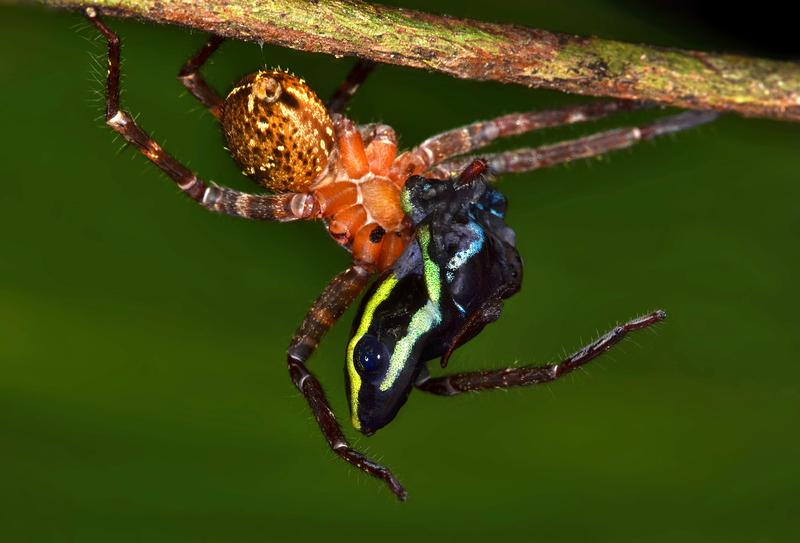 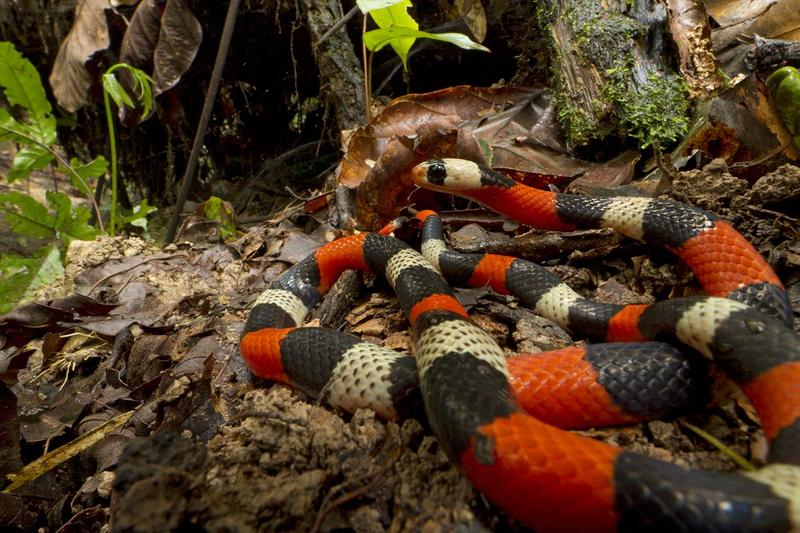 The false coral snake may have the vivid colors of venomous coral snakes, but not their toxic venom. It is one of the 19 snake species recorded in the survey. Image credit: Piotr Naskrecki. 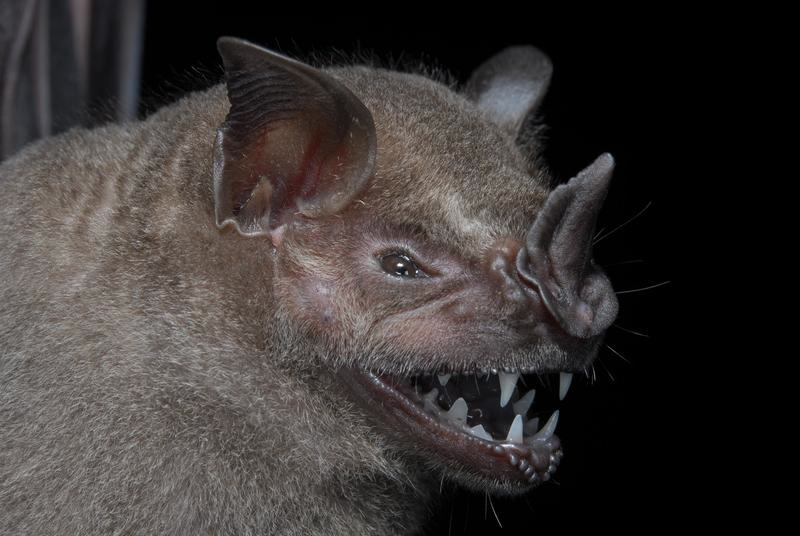 Of the 28 bat species found during the survey, the larger fruit-eating bat (Artibeus planirostris) is most common. Image credit: Burton Lim. 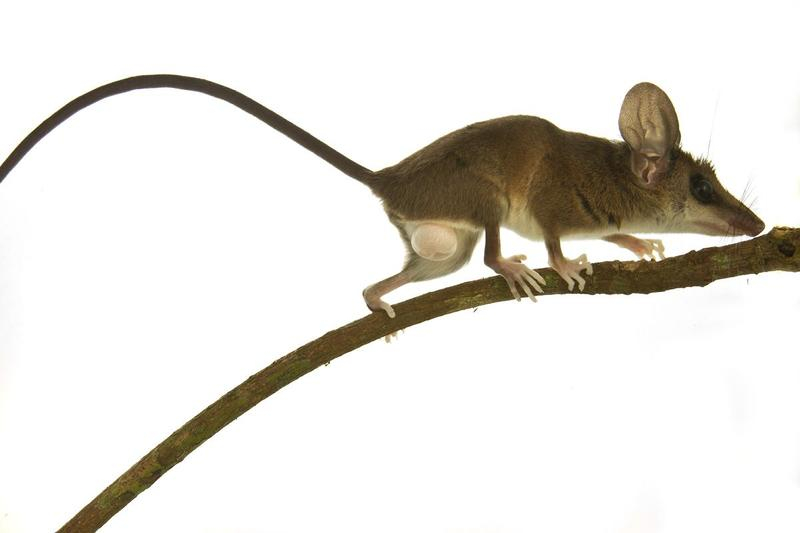 The delicate slender opossum is a tree-dwelling marsupial found in forests of the Guiana shield. It feeds mainly on insects and fruit. In their press release, the researchers say, “this species is indicative of pristine, primary forests, and is one of the 39 species of small mammals (rats, bats, opossums) discovered on the expedition. Many small mammal species are important for dispersing seeds and ensuring forest regeneration.” Image credit: Piotr Naskrecki