They’re not tsunamis, but they can be dangerous to ships. They’re gigantic ocean waves, seeming to appear out of nowhere. New research may help predict them. 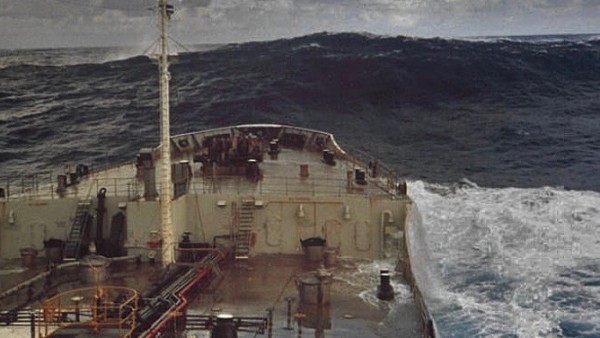 A rogue wave estimated at 18.3 meters (60 feet) in the Gulf Stream off of Charleston, S.C. At the time, surface winds were light at 15 knots. The wave was moving away from the ship after crashing into it moments before this photo was captured. Image and caption via NOAA. 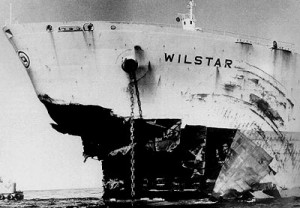 A ship damaged by a rogue wave. Image via H.Gunther and W.Rosenthal

Imagine you’re in a storm where the average wave is 20 feet (6 meters) tall. Suddenly, a wave appears that’s 100 feet (30 meters) tall. A sudden, unexpected wave that tall can sink even large ships and is an example of a rogue wave. Rogue waves aren’t tsunamis, which are caused by undersea earthquakes. They seem to appear out of nowhere, in both calm and rough seas. Because the process that forms them isn’t well understood, rogue waves can take ships by surprise.

And that’s why they can be dangerous to all sorts of ships, including cruise ships.

Tracking down a rogue wave in order to study it scientifically is also difficult and dangerous. So researchers have come up with another way to study these waves. Using light instead of water, it’s possible to create a small-scale optical version of a rogue wave in the lab.

In the past few years, scientists have created rogue waves made of light in optical fibers, photonic crystals, and other optical systems. Recently a team of researchers at the University of Strathclyde in Glasgow, Scotland, proposed a new way to produce optical rogue waves in a two-dimensional space. Their work is published in a recent issue of Physical Review Letters. One of the researchers, Gian-Luca Oppo, said in a statement:

By understanding the mechanism for generating rogue waves, we can devise methods to detect their precursors …

By knowing where there is a high probability of rogue waves occurring, ships can change course to avoid catastrophic events. 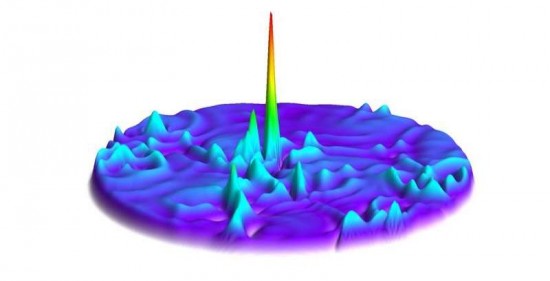 An optical rogue wave with a peak that’s 27 times the mean fluctuation from the average intensity. In this case, the peak is formed by multiple optical vortices colliding with one another. Image via Gibson, et al, via Phys.org.

Oppo and his team of researchers speak of multi-vortex collisions creating rogue waves. A description of the new research at Phys.org said:

In the new proposed mechanism, optical rogue waves could form by a sequence of events that starts with a small instability in the regular wave pattern.

If there are enough vortices, then multi-vortex collisions can occur and produce a large, short-lived spike—the optical equivalent of a rogue wave. 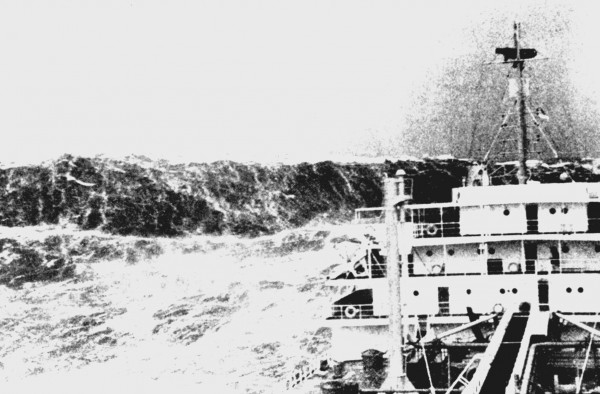 View larger. | Merchant ship in heavy seas as a huge wave looms ahead. Picture taken in the Bay of Biscay near the 100-fathom curve, off France, in 1940. Huge waves are common near the Bay of Biscay’s 100-fathom line. This image was published in the fall 1993 issue of Mariner’s Weather Log. Image via Wikimedia Commons.

Rogue waves were the stuff of sailors’ tall tales until an 85-foot (26-meter) wave broke over an oil platform in the North Sea in 1995.

Since then, scientists have tried to understand how huge rogue waves can arise from the erratic interactions of smaller waves on a choppy sea.

In the video below, CBS News reports on a large wave which hit the Louis Majesty Cruise Ship in 2010, killing two passengers and injuring 14.

Bottom line: Scientists are trying to understand rogue waves – huge, unexpected waves that can damage ships – by studying them in the lab.

Read more about wind, swell and rogue waves from NOAA