Of the eastern and central U.S. states studied so far, Oklahoma is by far the worst-hit in recent years. Texas, Kansas, Colorado, New Mexico and Ohio all have had more earthquakes in the past year. 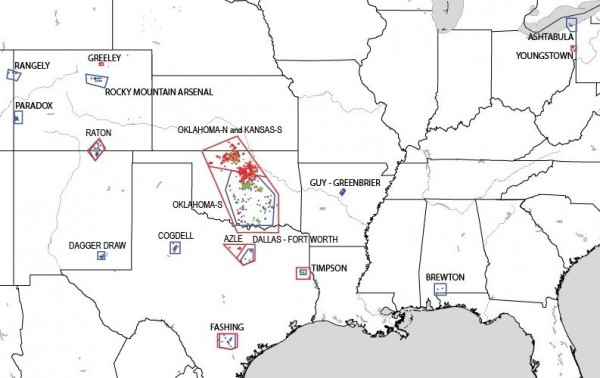 The U.S. Geological Survey (USGS) released a new report and its first map today showing the frequency of earthquakes thought to be triggered by human activities. USGS said in its April 23, 2015 announcement:

Earthquake activity has sharply increased since 2009 in the central and eastern United States. The increase has been linked to industrial operations that dispose of wastewater by injecting it into deep wells.

This practice occurs in hydraulic fracturing – or fracking – which is the forcing open of fissures in subterranean rocks by introducing liquids (water, sand, chemicals) at high pressure. The process is used in oil and gas extraction.

USGS scientists identified 17 areas within eight states with increased rates of what it called induced seismicity. Since 2000, several of these areas have experienced high levels of seismicity, with substantial increases since 2009 that continue today.

Seismic activity in Texas near the Dallas-Fort Worth area has also increased substantially recently. Kansas, Colorado, New Mexico and Ohio have all experienced more frequent quakes in the last year.

According to the study, all of the areas highlighted on the map are:

This report looked at the central and eastern United States; future research will incorporate data from the western states as well.

This data animation by the U.S. Geological Survey (public domain) shows the extraordinary increase in earthquakes (low to moderate intensity, 3.0 and higher) in the Oklahoma in areas where hydraulic fracturing for gas and oil has greatly increased.

Mark Petersen, chief of the USGS’ National Seismic Hazard Project, told the LA Times that the pattern of increased quakes is “troubling.” He said in the USGS announcement:

These earthquakes are occurring at a higher rate than ever before, and pose a much greater risk and threat to people living nearby.

The USGS report outlines a preliminary set of models to forecast how hazardous ground shaking could be in the areas where sharp increases in seismicity have been recorded. The models ultimately aim to calculate how often earthquakes are expected to occur in the next year and how hard the ground will likely shake as a result. This report also identifies issues that must be resolved to develop a final hazard model, which will be released later. USGS said:

These preliminary models should be considered experimental in nature and should not be used for decision-making.

This is the first comprehensive assessment of the hazard levels associated with induced or “man-made” earthquakes in these areas.

Bottom line: A new report from USGS – released April 23, 2015 – shows that earthquake activity in the central and eastern U.S. has sharply increased since 2009. The increase has been linked to industrial operations that dispose of wastewater by injecting it into deep wells.