This upcoming week looks exceedingly cold for the U.S. East. Some areas could see high temperatures only in the teens or perhaps colder by the end of this week.

We are already past the halfway point for winter, and it’s time to find out how much snow has fallen across the United States. 2013 has had a lot more wintry weather across the United States, especially when you contrast this year to the lack of snow from 2012. Looking at the weather models for the upcoming week or two, it looks as if a large majority of the United States will continue to see cold temperatures as colder air from Canada pushes to the south. In fact, this upcoming week looks exceedingly cold for the U.S. East. Some areas could see high temperatures only in the teens or perhaps colder by the end of this week.

Let’s contrast the snow cover across the United States today to snow cover at this time last year (2012): 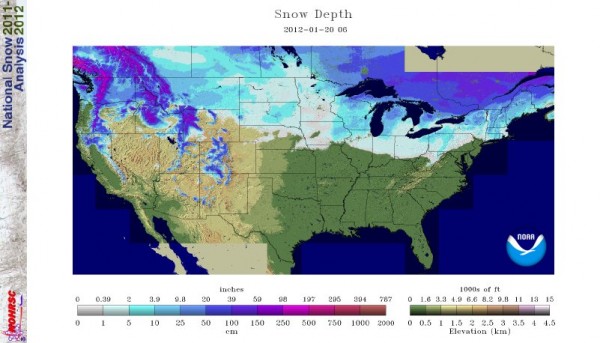 Snow depth across the United States on January 20, 2012. Image via NOAA 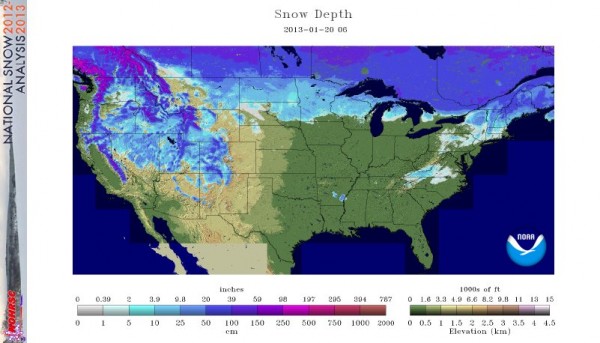 Snow depth across the United States on January 20, 2013. Image via NOAA 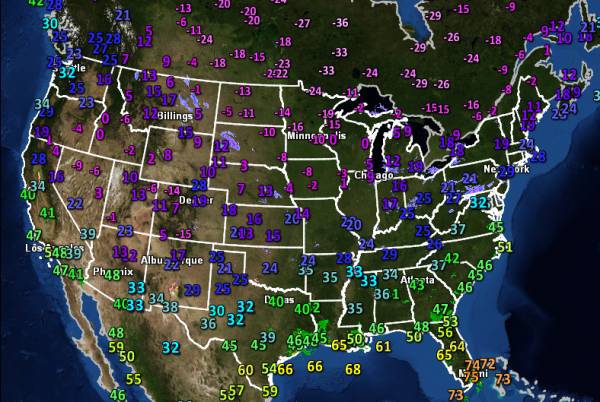 Currently, cold air is pushing south into the United States with very cold temperatures occurring across the U.S. Midwest and Northeast, and pushing to the U.S. Southeast. Temperatures are so cold that places such as Chicago are experiencing high temperatures only in the single digits. When you factor in the wind, some areas across the northern U.S. are experiencing wind chills around 10 or 20 degrees below zero (Fahrenheit). By the end of this week, another strong cold front will push into the eastern United States. It will bring very cold temperatures and possible snow that could extend from the Northern Plains to the Ohio Valley. There might also be a snow/ice threat for a few areas in the southeastern United States, especially for South Carolina and North Carolina where a wedge event could take place. Model runs will change over time, so things will likely change by the end of this week. However, the pattern does promise more winter-like conditions across a large majority of the United States with many areas seeing very frigid temperatures. 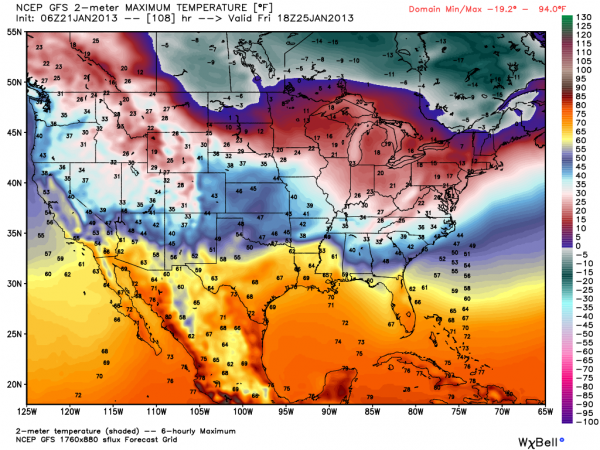 Potential temperatures on Friday, January 25, 2013 across the United States via the GFS model run. Image via Weatherbell

Bottom line: Winter has been slightly more active in 2013 than it was in 2012, but there are still plenty of areas that could use the snow, especially in the ski resort areas. Cold air from the north will be pushing southward across a large majority of the country, and it will likely provide some of the chilliest temperatures seen this winter across the country. Later this week, around Friday and Saturday, the weather could be active for parts of the country, as another front pushes to the southeast and could bring wet and possibly snowy weather east of the Mississippi River. Meteorological winter does not end until March 1, 2013. We still have a good month to go to finally see how active or inactive this winter will be.