Unusual precipitation patterns in the U.S.

Depending on where you live, you could call 2014 the year of the drought, or the year of the deluge. In early August 2014, we have seen several significant rainfall events occur across the United States. During the week of August 10, for example, a slow moving area of low pressure across the Great Lakes and New England produced widespread showers and storms. Yesterday (August 19), parts of Phoenix (yes, the desert) recorded over four inches of rain in a short time period, thanks to an upper level low pushing into the western United States. Are extreme rainfall events related to climate change, and/or has urban sprawl contributed to flash flooding events due to more concrete and poor sewer systems? The answers to both questions are probably yes. Follow the links inside to learn more.

Sampling of U.S. extreme rainfall events so far in August 2014

An extreme rainfall event from earlier in 2014

What about the rest of the world?

Is global warming responsible for the increase in urban flooding in the past few years? 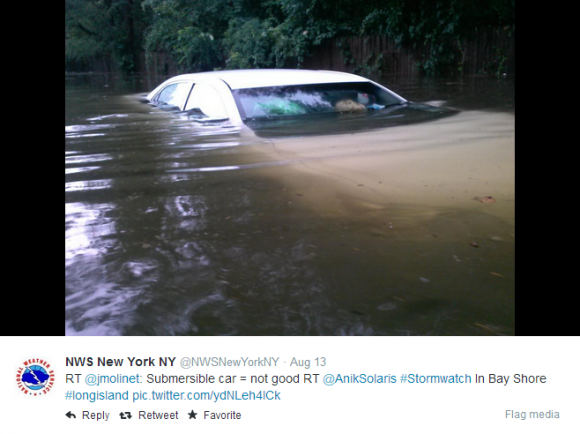 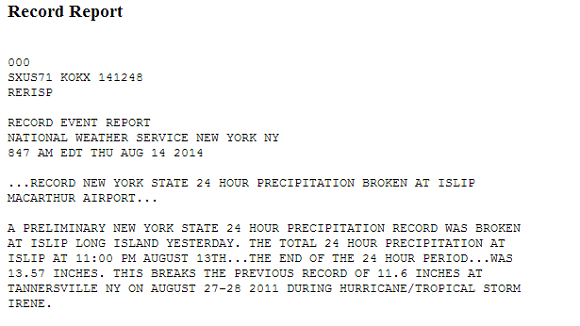 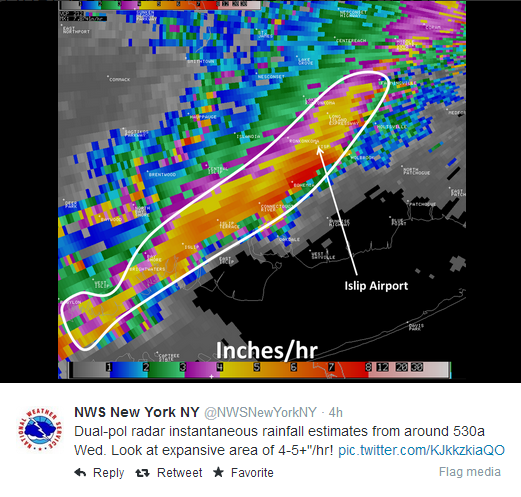 Sampling of U.S. extreme rainfall events so far in August 2014

On August 18, heavy rain fell in parts of Arizona and the desert U.S. Southwest. Some spots recorded over four inches of rain in a small amount of time.

The 5.59 inches in 12 hours near Black Canyon City represents a greater than 1 in 1,000 years precipitation event. The Agua Fria River near Rock Springs rose over 23 feet in only 7 hours. At one point rising more than 10 feet in only 2 hours between 6 a.m. and 8 a.m. This would be the 4th highest crest, highest since Jan 2010 and second highest since 1993.

During the week of August 10, a slow moving area of low pressure across the Great Lakes spun its way towards New England. Behind the system, a very dry air mass was in place and would eventually push into the U.S. Southeast and provide lower humidity in places that typically see muggy conditions. The first area that was hit was Detroit, Michigan on August 12, 2014. Heavy rain produced flash flooding that brought water levels as high as 14 feet. Cars were submerged under water, and areas were impassible. Over four inches of rain fell and the heavy rain event made it the second wettest day in Detroit history. The next day, the heavy rains struck Baltimore and parts of the U.S. Northeast. According to the Capital Weather Gang, 10 inches of rain fell south of Baltimore in northern Anne Arundel County. In Washington D.C., two inches of rain fell. On August 11, Islip, New York recorded 13.57 inches of rain in 24 hours, breaking the New York state 24 hour rainfall total of 11.6 inches recorded back in 2011 when Tropical Storm Irene affected the region.

Meanwhile, heavy rain in Kearney, Nebraska last week produced serious flooding in a hospital. Check out the footage of the water pouring into the building. 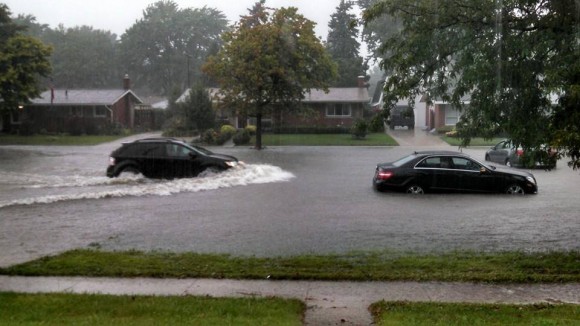 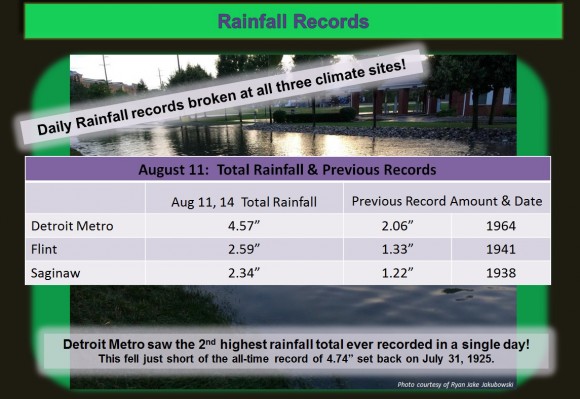 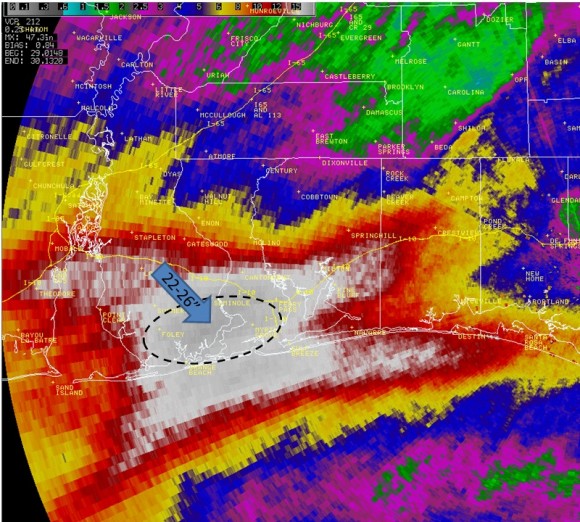 An extreme rainfall event from earlier this year. Extreme rainfall in the U.S. hasn’t been limited to August 2014. How can we forget the extreme rains that occurred across the Gulf Coast in late April, 2014? Some spots recorded over 24 inches of rain within 48 to 72 hours.

It is not unusual to see heavy rainfall totals of four to eight inches from a tropical cyclone making landfall. However, these events are not from tropical moisture. They are mostly caused by blocks in weather patterns where areas of low pressure are able to pull plenty of moisture and are unable to push out quickly. They are also due to amplification of the jet stream. The jet stream has been very active in the eastern United States in 2014, which helps explains the cooler and wetter conditions.

At the same time, in the western United States, a ridge of high pressure has caused one of the worst droughts ever seen in the state of California.

What about the rest of the world? Extreme precipitation events aren’t only occurring in the United States. They are occurring across the globe. Lets take a brief look at some July and August 2014 precipitation highlights around the world.

On August 20, heavy rainfall in Hiroshima, Japan resulted in a deadly landslide, killing over a dozen people.

Meanwhile, was a very wet July for parts of Europe. According to the NCDC, France had its wettest July since national records began in 1959, receiving double the 1981–2010 average and surpassing the previous record set in 2000. 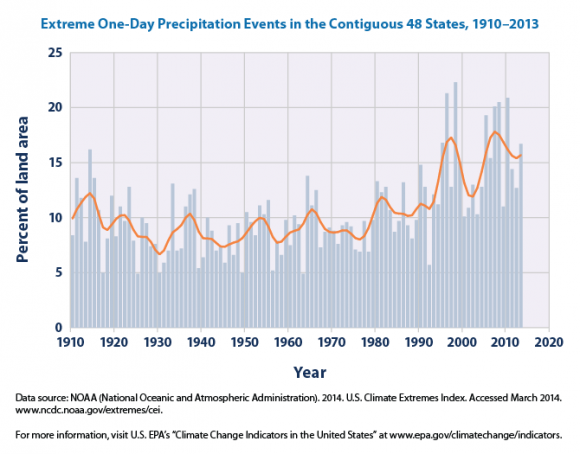 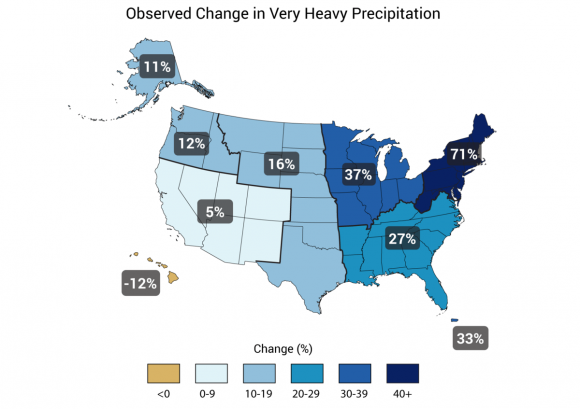 According to the National Climate Assessment, the most extreme precipitation events (those in the 99th percentile of intensity) have increased in every region of the contiguous states since the 1950s. In the U.S., the highest precipitation events seem to be occurring more in the Northeast and across the Midwest. Image via National Climate Assessment

Is global warming responsible for the increase in urban flooding in the past few years? As we’ve all heard by now, computer models suggest that, as Earth’s climate warms, we are more than likely to see bigger swings in both rainfall events and droughts. Meanwhile, it’s super important to note that you cannot point to a single event and link it, clearly, to climate change or global warming.

However, after seeing repetitive episodes of extreme flooding – such as the floods in Nashville (2010) or Atlanta (2009) and such as the floods of August, 2014 – you might wonder when we will finally conclude that global warming is responsible. Some climate experts are now beginning to make this connection. According to Dr. Marshall Shepherd, Director of the Atmospheric Sciences Program at University of Georgia and host of WxGeeks on the Weather Channel, both humans and climate change do play a role in urban flooding. Shepherd says there is a unique formula that comes to mind regarding extreme rainfall events. That is:

He explains how most of the flooding events that have occurred over the past 10 years are a result of “extreme meteorological conditions, urbanization, and people.”

One factor, he says, is the sheer size of cities, which are growing and becoming more spread out. As cities continue to expand in size, it’s as if a target has gotten larger and easier to hit. According to Shepherd:

If the bullseye is tripled in size, I probably have a better chance of hitting the bullseye more often. Warming climate is likely increasing the urban flood bullseye, making the probability of such flooding more likely.

Theresa Anderson, whose Ph.D. in Atmospheric Sciences at the University of Georgia came from research into hydrometeorology, says heavy rainfall and other extreme weather can severely impact big cities.

These heavy rain events are devastating for cities. Urban areas, which are expanding and aggregating, are not equipped to handle large volumes of water due to outdated storm water management, impervious surfaces, lack of vegetation, etc. Unfortunately, that leads to major flooding over a short period.

Hopefully these events are anomalies, but when considering the predictions of an accelerating water cycle, record rainfall events may be more likely.

Bottom line: Under conditions of a warming climate, a growing population and subsequent urban sprawl mean that extreme precipitation events are affecting cities more now than they did before 1970. Not one extreme weather event can be linked to global warming; however, computer models suggest that accelerating the water cycle via climate change will continue to bring about unusual precipitation events, including drought or flash flooding. Urban planners are beginning to speak of the need to adapt and improve cities’ infrastructures – for example, their drainage systems – to help reduce urban floods.