A rare ozone hole is open over the Arctic

Since March 14, ozone over Earth’s Arctic has decreased to what’s normally considered ‘ozone hole levels.’ Scientists expect this year’s Arctic hole – the largest ever seen over the Arctic – to close again around mid-April 2020.

When you hear about an ozone hole, it’s typically the one that forms over Antarctica each year in southern spring (northern autumn). But since about mid-March 2020, scientists using satellite data have been tracking a “mini” Arctic ozone hole. It’s small compared to Antarctica’s annual hole, but unusually large for the Arctic. Conditions in the air above the Arctic – including powerful westerly winds that trapped cold air in a polar vortex – caused this rare strong reduction of Arctic ozone. Atmospheric scientist Martin Dameris at the German Aerospace Center in Oberpfaffenhofen, who is tracking 2020’s Arctic ozone hole, was quoted in Nature as saying:

From my point of view, this is the first time you can speak about a real ozone hole in the Arctic.

Abnormally warm over Antarctica half a year ago. Abnormally cold over the Arctic in recent weeks. Is that a coincidence? Climate is complex, and Earth’s climate is changing, so it’s hard to know. 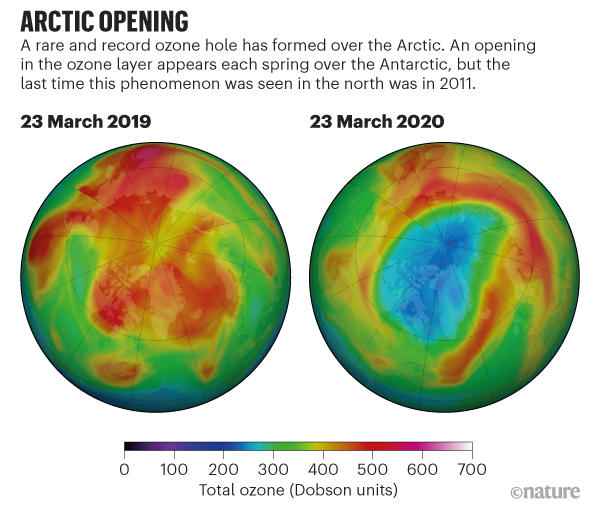 A comparison of ozone levels over the Arctic in March 2019, and in March 2020. Image via Nature.

Here’s what scientists do know. They know that small ozone holes have been spotted over the Arctic in previous years, but that 2020’s Arctic ozone depletion is much greater. Diego Loyola of the German Aerospace Center said in a statement from ESA:

Overall, the Arctic’s ozone depletion tends to be significantly less than that over Antarctica. Holes in Earth’s ozone layer above either pole are driven by extreme cold – stratospheric temperatures below -80°C (-112°F) – sunlight, powerful winds and substances such as chlorofluorocarbons (CFCs). As reported in Nature, in 2020, powerful westerly winds flowed around the North Pole. They trapped cold air within a polar vortex. The report in Nature said:

There was more cold air above the Arctic than in any winter recorded since 1979.

By the end of the polar winter, the first sunlight over the North Pole initiated this unusually strong ozone depletion – causing the hole to form. However, its size is still small compared to what can usually be observed in the southern hemisphere.

Since March 14, the ozone columns over the Arctic have decreased to what is normally considered ‘ozone hole levels,’ which are less than 220 Dobson units. We expect the hole to close again during mid-April 2020.

The ozone layer is a natural, protective layer of gas in the stratosphere that shields life from the sun’s harmful ultraviolet radiation – which is associated with skin cancer and cataracts, as well as other environmental issues.

In the 2018 Scientific Assessment of Ozone Depletion, data shows that the ozone layer in parts of the stratosphere has recovered at a rate of 1-3% per decade since 2000. At these projected rates, the Northern Hemisphere and mid-latitude ozone is predicted to recover by around 2030, followed by the Southern Hemisphere around 2050, and polar regions by 2060.

This timelapse image shows the launch of a weather balloon at Earth’s South Pole in the southern spring (northern autumn) of 2019. Balloons like this one can carry ozone-measuring sondes that directly sample ozone levels vertically through the atmosphere. In the Arctic, weather balloons like this one are launched from observing stations in various places, including the Polarstern icebreaker, which is frozen in sea ice for a year-long expedition. Other scientists monitor Earth’s ozone hole from space via satellites. Image via NOAA.

Bottom line: The “ozone hole” commonly referenced is the hole over Antarctica that forms each southern spring (northern autumn). But beginning around mid-March 2020, satellite data revealed that ozone concentrations over the northern polar regions have plummeted, causing a “mini-hole” in the ozone layer over the Arctic.