Severe weather is likely to develop across the southeast United States Tuesday and Wednesday. The main threat will be damaging straight line winds and tornadoes.

A very large and potent weather system is developing across the U.S. central plains today. The system will advance eastward to provide a large portion of the eastern United States a chance to see strong to severe thunderstorms Tuesday and Wednesday.

The cold front is very strong, as temperatures are nearly 20 to 30 degrees cooler behind the front. Ahead of the front, unusually warm temperatures are pushing northward with dew points in the upper 50’s and low to mid 60’s. With plenty of moisture and warm temperatures in place, thunderstorms that develop across this region will be able to use this energy as fuel to help intensify. If you live in Missouri, Indiana, Illinois, Arkansas, Kentucky, Louisiana, Tennessee, Mississippi, Alabama, Georgia, South Carolina, and North Carolina, you need to be prepared for the possibility of damaging winds and isolated tornadoes Tuesday and Wednesday as this storm sweeps to the east.

The Storm Prediction Center (SPC) has issued a moderate risk for severe weather for northern Louisiana, Arkansas, northwest Mississippi, and southeast Missouri. Meanwhile, a slight risk has been issued for the states surrounding the moderate area:

Wind is another huge factor with these storms Tuesday and Wednesday. The map below indicates the probability of damaging thunderstorm winds or wind gusts of 50 knots or higher within 25 miles of a point. Meanwhile, the hatched Area shows a 10% or greater probability of wind gusts 65 knots or greater (hurricane force around 74 miles per hour) within 25 miles of a point.

Hail is possible in the strongest storms today, but is not the main threat. Generally everyone in the slight and moderate risk has a 15% chance probability of one inch diameter hail or larger within 25 miles of a point.

Meanwhile, the SPC has released the Day 2 outlook for severe weather. The threat pushes the storms eastwards and will affect portions of Alabama, Georgia, Tennessee, South Carolina, North Carolina and parts of the Mid-Atlantic. For now, a slight risk has been issued for these areas, with an elevated or 30% probability of severe weather within 25 miles of a point within the standard slight risk. 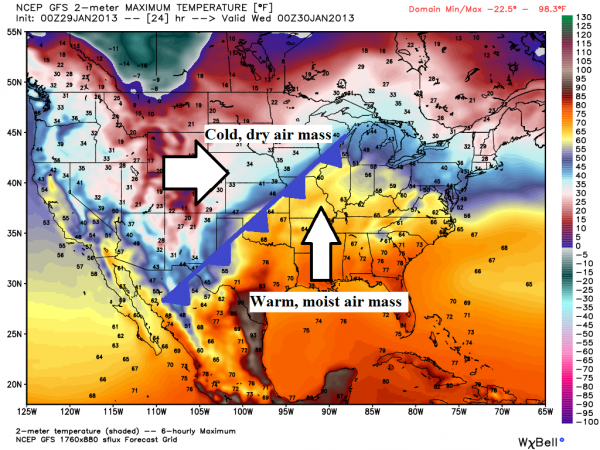 Warm air ahead of the front will help fuel the thunderstorms that develop across the Southeast Tuesday and Wednesday. Image Credit: Weatherbell

When you look at the large picture, it is pretty obvious that straight line winds will be the main threat with this system as a squall line, also called a QLCS, or Quasi linear convective system, pushes eastward. There are concerns that discrete cells could develop ahead of the front, which would be the area prone to see the strongest tornadoes. The region most likely to see supercells will be the areas within the moderate risk area today. There is plenty of wind shear, or change in wind speed or direction with height, in the atmosphere associated with this strong cold front. No doubt that as this front pushes eastward, the momentum will be transferred to the surface where winds could easily gust to 60 to 70 miles per hour. Squall lines can produce widespread damage, so everyone in the highlighted areas noted on the SPC Day 1 and 2 outlook should be weather aware as this system pushes into your area. As this line advances east, there is no doubt the severe thunderstorm watches or tornado watches will be issued in advanced to prepare people for the upcoming storms. If you live in the area where this line of storms can sweep through, you might want to bring in any loose objects that are sitting outside that could be picked up by the wind and be used as flying debris. 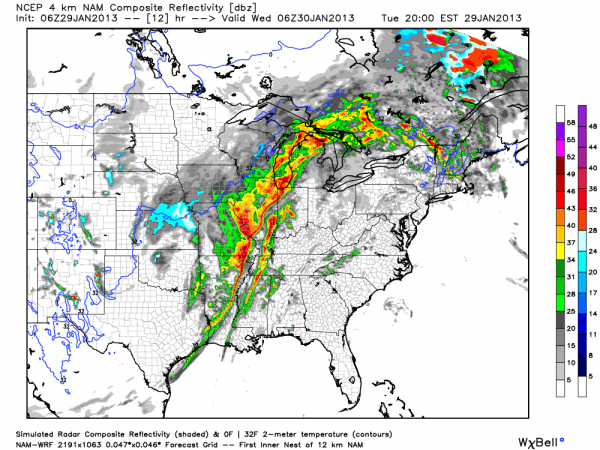 The NAM 4 KM model can show us a glimpse at what the radar might look like at midnight on Wednesday morning. It indicate a very strong line of storms pushing into Mississippi, Tennessee, Kentucky, and Indiana. Image Credit: Weatherbell

Bottom line: A strong storm system is developing thanks to unusual warmth across the central and southeastern United States. A squall line (QLCS) will form ahead of this front and be capable of producing straight line winds of at least 50 to 60 mph with chances of seeing embedded tornadoes within the line. A few storms that develop ahead of the main line of storms could produce tornadoes as well, and that area will likely occur across portions of Arkansas, northern Louisiana, and western Mississippi (areas located in the moderate risk). Make sure you have a weather radio, online application or some type of source to notify you when warnings are issued for your area during the day and night. Be safe, and keep an eye on the weather for the next 24 to 48 hours!